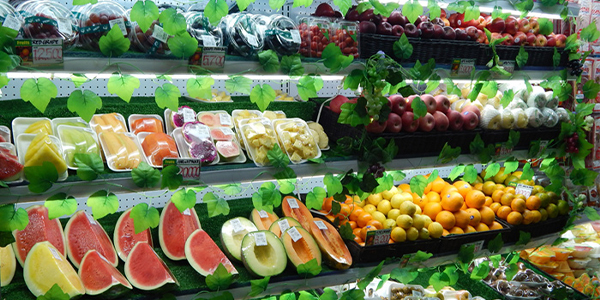 The supermarket helped America endure the Great Depression, create the middle class, end the Cold War and launch new technologies that forever changed the way the world does business.

The first supermarkets, selling more than 1,000 products, served as the catalyst for a new age in food retailing by delivering a bountiful variety of low-cost food to an impoverished nation. They did this by harnessing the efficiency of self service and mass merchandising, working closely with wholesalers and suppliers. Key to the early success of the supermarket were the shopping cart, introduced in 1937; the automobile, free parking lots and mechanical refrigerators in the home and store.

After the Depression, industry expansion continued to drive down the cost of food to as low as 6 percent of disposable income today – less than one-third of what Americans spent in 1930.

The low cost of food freed up substantial funds for families to spend on cars, homes, education, health care and other needs and amenities of life. As supermarkets proliferated in the 1950s and 1960s, they played a pivotal role in creating the American middle class.

The supermarket helped America win the Cold War in a subtle but compelling manner. In the 1950s, the U.S. State Department sponsored supermarket exhibitions abroad bannered “The American Way” with the key phrase “abundance without affluence.”

Soviet citizens and leaders, from Nikita Khrushchev to Boris Yeltsin, were often astonished by the abundant, low-cost food lining supermarket shelves in their trips to the U.S. Over time, the supermarket became a metaphor for what capitalism could do and Communism could not, especially as people around the globe recognized the benefits of a free-market system. The Soviet Union could compete with the U.S. in space flight and military hardware, but it could not deliver the standard of living that the supermarket made possible.

With suppliers, the supermarket launched the bar code. In 1974, Marsh Supermarkets, Inc., scanned the first product, a pack of Wrigley’s gum, at a store in Troy, Ohio. The bar code is now so ubiquitous it is scanned five billion times each day by over 100 million companies in over 100 countries. Today’s groundbreaking innovations such as self-scanning, online ordering, radio frequency identification, biometric payment systems and computerized shopping carts could reshape many other aspects of our lives.

The supermarket concept continues to evolve. Stores today offer an incredible variety of products. Consider that the corner grocery store of the 1920s carried about 700 items, most sold in bulk, and consumers had to shop elsewhere for meat, produce, baked goods, dairy products and other items. The supermarket brought all these products under one roof. The number of products carried climbed to 6,000 by 1960 to 14,000 by 1980 and to more than 30,000 today.

One-stop convenience was a key driver of supermarket expansion. Even the first stores featured health and beauty care items, electrical supplies, auto accessories and lunch counters. Today the offerings include prescription drugs, flowers, magazines, greeting cards, photo developing, banking and other services, along with a growing assortment of ready-to-eat and -heat foods.

With much hype over obesity and nutrition in recent years, supermarkets have taken the lead in promoting personal health and well-being. By offering a host of fresh, nutritious foods, including year-round produce, supermarkets have become a premiere source of whole health solutions and resources. Supermarkets now employ nutrition professionals to help customers prevent illnesses and manage chronic diseases through healthy diets. Stores also bring in nurses to check blood pressure, bone density and cholesterol levels.

American supermarkets serve their communities with compassion, supporting food banks, schools and other vital institutions. In the times of greatest need, such as the hurricanes that have swept Gulf Coast states in recent years and the 9/11 terrorism disasters, supermarkets are among the first businesses to reopen, dispensing water, medical supplies, batteries and other essentials.

The supermarket will always shape and mirror society. No other industry interacts more often with consumers face to face, serving one person, one family at a time. We learn their interests and demands directly and fast, and we immediately adjust our focus to reflect their decisions. Blending the talents of the owners and operators of companies ranging from one-store family businesses to the largest chains gives this industry a creative energy unmatched by any other.

Today the supermarket endures as a concept more than a single format. Whether consumers are shopping at a conventional supermarket, combination food-pharmacy store, a supercenter or a warehouse outlet, the business model remains the same: affordable prices, vast variety, abundant fresh foods and convenience.

As a powerful engine of change driven by consumers, the supermarket will continue to excel, innovate and grow in ways that will have a profound and lasting impact in the future.

The supermarket is a resilient and ever-changing enterprise whose contribution to communities worldwide is immeasurable. With a net profit of one penny on each dollar of sales, companies have virtually no margin for error, making supermarkets relentlessly competitive in discerning exactly what their customers want. All these factors have made the supermarket a uniquely democratic institution and the epitome of free choice and free enterprise. By what they purchase, families vote hundreds of times each week. Products that fly off the shelves are the winners, and those that don’t soon disappear.

That supermarkets can deliver this consumer service is a logistical marvel. The aisles, lined with thousands of products, are restocked weekly through millions of deliveries from all parts of the world. And yet, while the cost of life’s other necessities – housing, healthcare, education – ever escalates, the family budget for food as a percentage of income continues to decline.

As we mark the supermarket’s 75th birthday, consumers may want to pause the next time they walk the aisles of their favorite store. The boundless variety, the low cost, the brand quality, the abundant fresh foods, the one-stop convenience are all part of this ever-changing economic miracle that touches every American family every day.

Todd Hultquist is an analyst and historian at the Food Marketing Institute (FMI), a global trade association representing the food retail and wholesale industry. Visit: www.fmi.org.