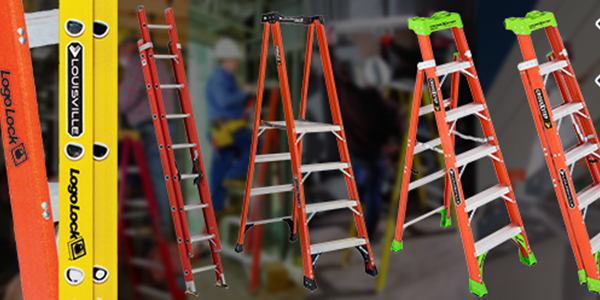 The steps Louisville Ladder Group takes to make its products PROTOUGHSM, designed for the professional.

The superstition that walking under a ladder can bring bad luck dates back to ancient Egyptian times. The maxim that building a quality ladder is good business has been a premise of Louisville Ladder Group LLC since its beginnings in 1946.

From its vantage point as the second largest manufacturer of ladders in North America, Louisville Ladder Group uses its leadership position to promote higher industry standards and innovative consumer education about using ladders safely. As the only manufacturer of all four types of ladders – fiberglass, aluminum, wood and steel – the company is in a unique position to heighten product awareness for every type of purchaser.

David Hale, president of Louisville Ladder Group, says, “With the joint venture of Grupo Imsa SA of Mexico and Emerson Electric Company of St. Louis, we have created a stronger and broader company. From my perspective, Louisville Ladder Group is well positioned for the future in all areas. Louisville Ladder Group’s widely respected management process drives a total commitment to quality, customer satisfaction and technology. A new initiative includes a program to optimize the supplier base, and lean manufacturing to improve response time to our customers.”

Headquartered in Louisville, Ky., Louisville Ladder Group was formed by the creation of the Emerson Electric-Grupo IMSA joint venture in 1998, which brought together several ladder manufacturers. The first company – Louisville Ladder, which specializes in contractor and industrial products – was started in 1946 as Louisville Metal Products; Emerson Electric purchased it in 1973. The second – Davidson Ladders, which makes commercial and household step and extension ladders – is based in Smyrna, Tenn. The third – Cuprum Ladder, located in Monterry, Mexico – makes ladders for the Mexico and Latin America markets.

One of the company’s brands, RIDGID® Ladder, is manufactured by Louisville Ladder for the Ridgid Tool Company, mainly for its normal distribution network. The LadderPro™ Accessories line – including tool organizers, heavy-duty hooks, ladder tie-downs, ladder levelers, ladder jacks, ladder mitts and ladder stabilizers – is marketed to both consumer and professional ladder users.

One of the largest ladder manufacturers in the world, Louisville Ladder Group employs 1,700 people worldwide. The scope of its operations enables the company to offer its customers both greater efficiencies and extensive product selection. According to Mark Anton, manager of marketing, the company’s five ladder product categories break down as follows: fiberglass, 53 percent of total sales; aluminum, 36 percent; wood, 7 percent; steel, 3 percent; and accessories, 1 percent.

Along with the plants in Kentucky, Tennessee and Mexico, the U.S. network has warehouses in Atlanta, Chicago, Dallas, Houston, Kansas City, Los Angeles, Philadelphia and San Francisco. Its Canadian warehouses are located in Langley, British Columbia, Mississauga, Ontario, and Ville St. Laurent, Quebec.

When it comes to building ladders with quality in every step, Louisville Ladder Group extends the heritage of the original Louisville Ladder, which has always built its products with professionals in mind. The company’s industrial step and extension ladders, warehouse ladders, scaffolds, planks and stages are made to withstand heavy-duty use at all types of construction sites; in retail stores such as Home Depot, Kmart, Target and Wal-Mart; and in warehouses for automobile and electronics manufacturers.

The consumer and commercial ladders marketed under the Davidson and Cuprum brands meet comparable standards for quality and durability in their respective markets. Anton says that fiberglass is the most popular material in this category because contractors and homeowners are looking for durable, lightweight products that are non-conductive to electricity. He notes that painters prefer lightweight aluminum ladders, while some consumers and general contractors still choose traditional wood.
The history of Louisville Ladder shows the innovations the company has brought to the industry:

Ladder carefully chooses every component that affects the performance of its products. For example, the bracing is made of strong steel in a double rivet-step construction, and is secured with six large-headed rivets for maximum strength. In its production, the company only uses fiberglass and aluminum rail specified to meet the demands of the household and the work place.

Louisville Ladder’s engineering department works closely with the American National Standards Institute (ANSI) and the Occupational Safety and Health Administration (OSHA), and consults with users in the work place to design products that meet both safety requirements and the specific needs of the users. Further, the company relies on its strong relationships with suppliers to meet its quality objectives. Donald West, director of procurement, emphasizes the importance of this relationship:
“We rely on our suppliers to work with us to produce a quality product at a competitive price. We work with them on design and development. Some of them have been with Louisville Ladder for 15, 20, 25 years or more. They help us grow the business.”

Emphasizing the value of educating users in safety points, Hale says, “This is just one more way for us to present users with the knowledge of how to safely manage their tasks when working with a ladder.”

Louisville Ladder Group makes the C.L.I.M.B. program available to companies through several channels, including customized training sessions with Louisville Ladder associates. Hale himself will be promoting the program nationally to increase safety awareness at every level of ladder use – from a one-step riser to a 60-foot extension ladder to a rolling steel platform. With C.L.I.M.B., Louisville Ladder Group adds one more innovative step to its program for quality products.