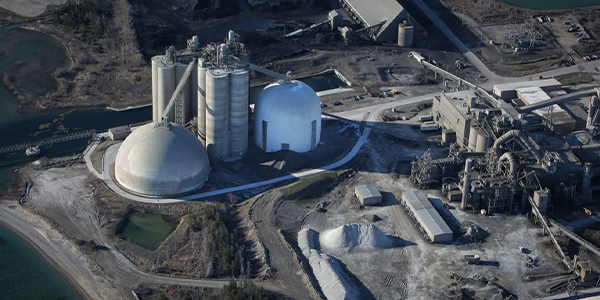 It’s an annual rite of spring on the Great Lakes – a long line of ships on the Detroit River, waiting for the main lock to finally open after a long and frozen winter. This year, the first ship in that line was the Capt. Henry Jackman, a freighter carrying a heavy load of clinker, used to make cement.

The cargo belonged to St. Marys Cement, a historic company serving both the American and Canadian sides of the Great Lakes. In more than 90 years, this company has helped to build everything from the old-time hockey mecca Maple Leaf Gardens to the ultramodern expanse of Toronto’s CN Tower.

The Jackman’s 29,500-ton cargo originated at the St. Marys Cement plant in Bowman-ville, Ontario and was headed for another plant on the Rouge River near Detroit, where the clinker is processed into cement powder. The rest of the load was headed to a plant in Milwaukee.

Four icebreakers were needed to clear the way for the cement boat – which would be the first of many this spring and summer to ply the shipping lanes of the Upper Great Lakes. It may be a yearly ritual, but behind the scenes St. Marys has taken aggressive steps to modernize its plants and to expand its line of products to grow into the 21st century.

Whatever it takes
“We’re working with whomever we have to, to make things go as smoothly as possible,” said Bill Asselstine, Director of Promotion & Marketing Services for the Ontario-based company. He pointed out that while cement still looks the same after all these years, the issues related to making it and marketing it – from border security to meeting new environmental standards – are in constant flux.

Two entrepreneurs, John Lind and Alfred Rogers, founded the company in 1912 in the town of St. Marys, Ontario. At the time, the cement industry was highly regional in nature. In 1912 the cement was carted out of the St. Marys plant on horse-drawn carriages.

Asselstine said that, according to historical accounts, John G. Lind had struck it rich in the Klondike gold rush in the Canadian Yukon and was looking for an up-and-coming industry in which to invest. The Elias Rogers Coal Company had already been in business for some time and was interested in a new business that would keep it busy during the warmer summer months and the two got together and formed St. Marys. “St. Marys was already known as a stone town because it had a lot of limestone quarries,” Asselstine said. Rogers and Lind were correct in thinking the region would be perfect for a cement plant.

The company grew over the years, especially after World War II, when it added new kilns and then expanded the main plant in St. Marys. It was around that same time that the cement company forged a relationship with Hutton Transport, which is primarily a bulk and bag cement trucking business, operating from yards in Uniondale and Bowmanville, Ontario.

St. Marys Cement ultimately purchased the company from the Hutton family in the 1970s. Today, the company concentrates its efforts on delivering St. Marys Cement products, with more than 109 trucks and 125 trailers to markets in Southern Ontario, Western New York and Michigan.

Also in early 1930s, the company diversified into the ready-mix concrete business with a subsidiary known as Canada Building Materials (CBM). CBM is the building materials division of St. Marys Cement Inc. With a shared head office with the cement division in Toronto, CBM has approximately 450 ready-mix trucks operating out of 39 plants with most concentrated in the heavily populated areas of Ontario.

In the late 1960s St. Marys built a new cement plant east of Toronto, on Lake Ontario at Bowmanville. Located on excellent limestone and close to the growing Toronto market the company entered a phase of steady growth. Over the next 25 years St. Marys grew its ready mixed concrete, precast concrete, pipe and aggregate operations and in 1975 built a new cement plant in St. Marys adjacent to the original plant.

The location of the Bowmanville Plant on Lake Ontario helped when St. Marys Cement made its first forays into the American market. It started with the purchase of the Wyandotte Cement facility in Detroit in the late 1970s, and over the next 15 years St. Marys would acquire both cement plants and port facilities in other Great Lakes cities such as Buffalo, Cleveland, and Milwaukee.

By 1997, St. Marys was the third largest cement producer in Eastern Canada when it was sold to a British-based company, Blue Circle Industries. For a time, the firm’s largest Canadian rival was another European company, French-based Lafarge. When Lafarge bought Blue Circle a couple of years later, the deal needed approval under anti-trust regulations.

Brazil to the rescue
So, the St. Marys unit was spun off and sold to a Brazilian conglomerate called Group Votorantim, in 2001. Votorantim, based in Sao Paulo, is the largest manufacturer of cement in Brazil, with a leading market share, and is one of the 10 largest cement producers in the world. The company’s cement division, Votorantim Cimentos Ltda, operates 16 cement plants in Brazil with an annual capacity of 25 million tons. The division also operates five lime plants with an annual capacity of two million tons and has the capacity to produce 1.5 million tons per year of mortar.

St. Marys Cement – which is headquartered in Toronto — employs about 1,300 people. Its three main cement plants are located in Bowmanville on Lake Ontario, in St. Marys, and in Detroit.

Two years ago, the company announced that it was spending $40 million (Cdn) to modernize the St. Marys plant. A new grinding mill will increase capacity and allow the company to meet the growing demands for cement into the future. In 2003, St. Marys purchased Wisconsin-based Badger Cement. The addition strengthens the company’s position in the Wisconsin and northern Illinois markets, which include water-based terminals in Green Bay and Milwaukee, Wis., and Waukegan, Ill.

These terminals are supplied by cement produced at the company’s Bowmanville plant. “The Great Lakes market is generally a mature market for manufacturing,” Asselstine said. “But in the last 10 years we’ve seen unparalleled growth.” Like others in the construction industry, the firm found that low interest rates and a boom in residential housing offset a slowdown in other markets. And company officials are optimistic about the future.

“Votorantim has continued to improve operations since they bought us,” Asselstine said. “There have been some healthy reinvestments in the company.”

And so a company launched with riches from a Yukon gold rush has found a fortune to fuel its second century – in the rain forests of Brazil.