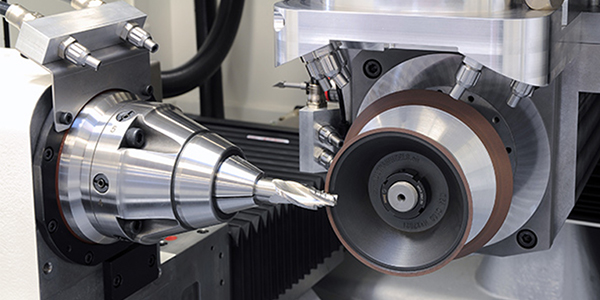 Officials at Giddings & Lewis (G&L) wanted to dance very badly with the right partner several years ago. Unlike the shy guys at the high school social who wait too long to get the right girl, (G&L) wanted top pickings. That is, while being pursued in an attempted hostile takeover in the mid-1990s, the company wanted to position itself early as a contender into the 21st century, while all their competitors were hunkered against the proverbial wall on the dance floor.

With the help of CEO Marvin Isles, the company sought a supportive parent company, which ended up being Thyssen (now ThyssenKrupp) of Germany. Such early-on aggression helped salvage the company and keep it from being dissected by a potentially unsympathetic suitor (Harnisch-feger). Now, poised for new growth into the next millennium, you could say that G&L picked the right girl.

“Every industry has been consolidating,” says G&L’s vice president of sales and marketing, Carl Barthelson, who uses the high school dance analogy as an example of the slow-to-react machine tool industry. “We did it two years ago, before a lot of competitors, when the market was still healthy. Because we picked who we wanted early on, we didn’t have to settle.” So, in addition to manufacturing excellence in the machine tool business, the machine tools division has regrouped and streamlined its enterprise, enabling seamless support capabilities worldwide. In the global marketplace, as many companies have learned the hard way, keeping customers satisfied is what the game is all about.

“One lesson learned by too few in the 1980s was that a lot of companies were bought by holding companies and every buying parent was looking for 10-15 percent returns per year,” explains Barthelson. “In the machine tool industry, you just don’t get that. As a result, a lot of companies fell out of glamour with their parents. We probably are in the best position that any machine tool company can be in for the 21st century.”

Having a healthy parent helps. ThyssenKrupp is now a $40 billion corporation involved in business around the world and is an ideal parent company, having succeeded as a manufacturer in the steel-making, elevator, shipbuilding and plastics industries. The machine tool business, called Thyssen Production Systems, comprises $1.5 billion of the $40 billion. G&L, with headquarters in Fond du Lac, Wis., comprises roughly one-third of the $1.5 billion. The company consists of three Fond du Lac operations housed in two facilities totaling 500,000 square feet. The groups include the Machine Tools division, Advantek Global Services, and the Controls, Measurement and Sensing division. Fadal Machining Centers, located in Chatsworth Calif., is a division of G&L, which produces vertical machining centers. The company’s foundry, Casting Technologies is located in Menomonee, Michigan.

R&D Investment Is Big pay Off

Thyssen’s vision has allowed G&L to invest 5 to 8 percent annually – amounting to roughly $7.5 million – in research and development, driven, in part, by customer demand. “Prior to their buying us, we didn’t do that,” says Barthelson. “We were more interested in showing a profit to our shareholders without reinvesting in ourselves…and we had not come out with new products in years.”

While the machine tool manufacturing industry is only a $30 billion industry, machine tools nonetheless touch every aspect of daily life, from the chair you sit on, the desk you write at to the coffee cup you hold. “All these products were touched somewhere in their lives by machine tools,” Barthelson notes. “It’s a really critical industry.”

The machine tools division’s key products include horizontal boring mills and vertical turning centers, which amount to the company’s “bread and butter for years,” explains Barthelson. “We are the leader in both these products.”

But as G&L has changed its philosophy over the years of not remaining stagnant in a changing world, it has changed its attitude in the types of products it makes and how these products are delivered to the customer and, serviced to keep other businesses running at peak performance levels. As the company has expanded its product line from big to small machines – translating into greater volume – it also has had to maintain quality within that higher volume. There are, notes Barthelson, more machine tool manufacturers competing for dollars in the small machine field. As a result, the company that provides the better service wins out.

“You have to make yourself better than anyone else in a crowded field,” says Barthelson. “You need better technological support and if you’re going global, you need seamless support around the globe.” G&L Machine Tools maintains an edge through its sister division in Germany, which makes similar small-to-medium horizontal machining centers, meaning that machines made either in the United States or Germany and sold throughout the world carry similar parts. The more than 100 servicemen who span the globe maintaining these machines are as familiar with, say, the nbh 170 in India as they would be in North Carolina. This is what gives G&L its seamless support advantage and what keeps its business growing.

“This gets customers up and running quicker,” says Barthelson. In support of this, G&L encourages customer input and has established a development council, a twice-a-year meeting of engineers around the world who meet and challenge each other to work out the kinks in every conceivable situation. “Within the business unit, we always used to include service and support,” Barthelson adds.

“No one ever asked how well we take care of the customer.” Now the technical support group, called Advantek, has become a separate entity within the business unit. Its job: Keep the customer happy.

The Upstarts In A Conservative Industry

“The machine tool industry traditionally has been conservative,” explains Barthelson. “There’s been some great technology, but sometimes it wouldn’t have happened without the customer paying for it. Today, the customer is less willing to fund something out of his or her own pocket so we’ve gone into our own pocket and designed new machines.”

“Our themes are: It has to either contribute to higher performance or lower cost and, if it doesn’t, we have to rethink why we’re doing it,” says Barthelson. For starters, G&L Machine Tools reinvented a five-year-old design on its Orion mid-sized horizontal machining center produced primarily for 3-D and 5-axis applications within the aerospace and automotive industries. “The old G&L would have continued on that design,” explains Barthelson. Now, equipped with a new mission, G&L has created a more streamlined version, the nhb 410, which it plans to unveil at the International Manufacturing and Technology Show in Chicago slated for September 2000. “The machine serves a similar work envelope, but it has a more aggressive feed rate, higher horsepower, higher spindle speed and tighter accuracies – all at a lower cost,” Barthelson says.

Responding to customer needs, G&L added emphasis to its rebuilding group. With the rugged design of G&L legacy products, vertical lathes and horizontal machining centers, it is not usual to find 30-and 40-year- old machines still producing in factories worldwide. By replacing worn parts or adding the latest control technology, the life of these machine tools can be greatly extended. “G&L instituted a stock-rebuild program that makes rebuilt G&L machine tools available and affordable to a wide range of customers,” Barthelson notes.

In other areas, G&L plans to enhance its large vertical turning centers in 2001 and its traditional horizontal boring mills by 2002. “Within the next three years, there’s a plan to renew and enhance all products within our family of machine tools,” he adds. “Something like this never used to happen that quickly.” But things are happening quickly, which is why some companies, unable to adapt, are being left behind. “American builders always thought they were tops in the world,” Barthelson says. “And then the world went global.”

“We feel incremental growth will be outside the United States,” he adds. To emphasize this point, Barthelson mentions a $10 million contract recently acquired from a company in Taiwan. Interesting to note, says Barthelson: TheTai- wanese firm performs subcontract work for a Fortune 100 company that once did the work in the United States.

In the new global marketplace, manufacturing machines that make quality parts faster than the competition is what has propelled G&L to its current leading- edge status. “We rarely have the lowest price, but we always provide a process that yields the lowest cycle time,” says Barthelson. “That’s the low-cost, long-term solution. That’s what
it boils down to today.”