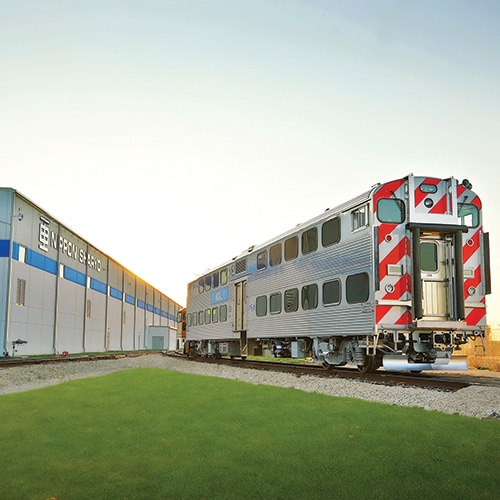 Today, what was once a small subsidiary now employs over 600 and conducts all of its manufacturing on its own across facility in Illinois. Ken Kuriyama, Deputy Director of sales and marketing for the company, talks his company’s strategic rise to prominence, and discusses the factors behind Nippon Sharyo’s ability to continuously offer high quality, high safety passenger cars at a cost-effective rate. Steve Engelhardt reports.

For over 30 years, Nippon Sharyo USA functioned in the U.S. as a delivery port and distributor for its Japanese parent company. “All of the carshell would be manufactured in Japan and then shipped here, where we would outsource the final assembly, conduct testing and deliver the product to the customer,” says Kuriyama. Everything changed in 2010, when the company won a $560 million contract with Metra, the commuter rail division of the Regional Transportation Authority for Chicago’s metropolitan area, agreeing to supply 160 gallery-type electric passenger rail cars to the agency by 2015. “It was a huge order for us, and we came to the decision that we needed to build a facility of our own here in the U.S. in order to be able to fulfill this contract and future ones of similar magnitude.”

Setting Up Shop
Given their contract with Metra, they chose Rochelle, Ill., as the location for their plant to be at. “Initially, we focused on final assembly, where our parent company would ship the carshell over to us and we would perform installation of the windows, seating, lightings, etc,” he says, adding, “However, our plan was to take on an even greater workload, and that led to us assembling the carshell here as well, after being sent the steel from Japan.”

This expansion of manufacturing capabilities and contract opportunities led the company to start the manufacturing of the carshell in 2013. Now, well over a year later, the decision has been made by the company to open a third shop, as they recently have decided to shift to the purchase of domestic steel in favor of importing it in from Japan due to regulative standards.

“Nippon Sharyo, over the past three years, has seen major milestones achieved with regards to its presence in the US passenger railcar market,” Kuriyama says, adding, “We have evolved to the point where all of our manufacturing is now done here in the United States, where we utilize domestic suppliers, and adhere overall to ‘Buy America’ standards in our passenger rail cars.”

Buying America
He says that the transition to domestic suppliers and materials reflects a greater commitment to quality and safety while also opening them up to wider range of contracts in the future. “Having suppliers closer to us brings a much greater level of communication and overall command of our logistics and supply chain,” he says, adding, “And with this contract with California Department of Transportation (Caltrans), it is one funded by the Federal Railroad Administration, who stipulates that all contracts under its authority must be ‘100 percent Buy America’.”

With regards to the Caltrans contract, Nippon Sharyo will be supplying 130 High-Speed Bi-Level Passenger Railcars in a deal that also includes an option for the agency to purchase an additional 300 railcars, creating a contract worth as much as $1.25 billion.

Aside from integrating quality materials with a fast-growing, expansive manufacturing presence, Nippon Sharyo has also made great strides recently in the critical area of safety. “Our experience of over 30 years in the United States, and even beyond that in Japan, has provided us with a deep understanding of how to manufacture safety into each of our railcars,” he says, adding, “And even though we are extremely confident in the safety of our current products, we’re always looking for ways to improve upon our existing structures and the security they provide to passengers riding in them.”

Kuriyama says that in addition to meeting FRA regulations and ADA requirements for the disabled, recently designed railcars have a Crash Energy Management System (CEM), where there is a crushable zone at the front of every railcar that greatly reduces the impact and injury of passengers in the event of a collision. “Unfortunately, accidents, while not common, do happen out on the rails and we assume the worst when designing and manufacturing these railcars for our customers,” he says, adding, “Safety features are customer requirements and going the extra mile on safety is a given for our company.”

And that’s significant, given the fact that the use of public transit by the American people is sharply on the rise. In fact, according to a New York Times report in March of 2014, public transportation in the United States is at its highest rate since 1956, with 10.65 billion trips taken on transit systems in 2013. And this figure continues to increase, in the face of stronger economic growth and its role in creating new jobs. With more people taking the train, the need to have safe yet innovative cabins to carry them in is essential. Nippon Sharyo provides just that.

Moving Forward
Looking back at the last 30 years, and particularly focusing on what has developed recently, Kuriyama says he is extremely proud of the leaps in progress the company has made since making the decision to manufacture in the U.S. “Our employees have grown from a handful to 600, we now are running operations across three shops, with a backlog that runs through 2017, with respect to the current contracts we are working on,” he says, adding, “To add to this, many of our customers are ones we have done repeat business with, and I think that speaks volumes as to the kind of effort we bring to each and every partnership we enter into.”

For Nippon Sharyo, it’s simply about following through on the production of quality railcars, in a manner that’s on-budget and on-time.