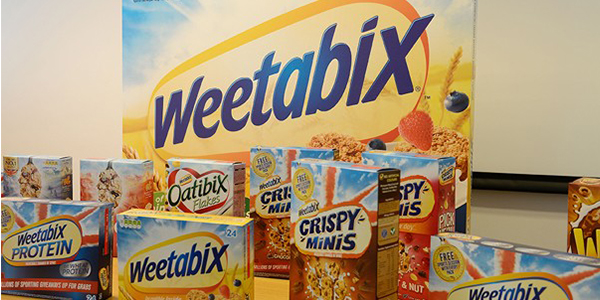 Across America, thousands of companies manufacture parts for everything from aircraft engines to swing sets. But it took a legendary British transplant, The Weetabix Co., Inc., to realize there was money to be made in marketing components for chocolate bars, fried-chicken coating, and snack mixes.

While Weetabix’s main cereal brand has a cult-like following in the United Kingdom, where its sales trail only Kellogg’s, the company’s newer North American arm has carved a niche for itself by making ingredients like puffed rice and corn flakes to other food manufacturers.

“Our industrial engineers have a slogan -– we called ourselves ‘Graingineers,’” said Steven Hanchen, the director of sales for the retail division of Weetabix’s North American operation. “They invented that word.” Today, Weetabix is finding – spurred on by the ever-growing popularity of granola bars, high-energy bars, breakfast bars and the like – that its industrial ingredient division is its fastest growing unit in the United States and Canada.

If you’re an American, the odds are pretty good that you don’t know the Weetabix brand name. But the item is virtually a staple in households across Britain or Ireland. The company was launched in 1932 in humble surroundings in the village of Northhamptonshire in the English countryside. Its signature brand, Weetabix, most closely resembles America’s Shredded Wheat, a crisp whole-grain cereal served in biscuit-sized pieces. It is manufactured without additives or preservatives, and packed with all the wheat germ and bran that’s in each grain of wheat.

Coming to America
Hanchen admits that Weetabix’s arrival in the United States was not as auspicious as the company had hoped. Around 1980, the company struck a deal with Colgate-Palmolive to market its Alpen brand, a traditional Swiss muesli that was targeted to the fast-growing health cereal market here in the U.S. But a major longshoreman’s strike stalled deliveries at the same time that American icon Quaker Oats was capturing the natural-food cereal market.

As a result, Weetabix decided to launch its own manufacturing capability here in the United States. Around 1983, the company purchased a small, existing cereal plant in Clinton, Mass. Over the last two decades, all of the production equipment in Clinton has been modernized and the building has been renovated. Hanchen said the square footage of the facility has roughly doubled. Meanwhile, the firm also added a second facility in Cobourg, Ontario. Currently, the company has about 500 employees at all its locations.

Today, the company markets its Weetabix brand in the United States and Canada as an organic, health cereal. The company’s other consumer brands include the Swiss-style Aspen, which contains rolled oats, whole wheat, juicy raisins, roasted hazelnuts, and sliced almonds; a Grainfield’s line that includes popular cereals like corn flakes and raisin bran, and Minibix, a line of bite-sized Weetabix mixed with either fruit or bananas.

While marketing these brands, the Weetabix operation in North America also has grown through a string of acquisitions. In 1985, the firm acquired Barbara’s Bakery, a leading maker of natural cereal bars that makes all its products using no preservatives, artificial ingredients, hydrogenated oils or refined white sugar. This unit, based in Petaluma, Calif., expanded the size of its manufacturing facility to 50,000 square feet.

In 1999, Weetabix added a new unit in North America, Northern Gold Foods, Ltd., manufacturer of premium breakfast cereals. Its granolas and mueslis have long been family favorites for those seeking natural, healthful, high-energy products. This division is located in a suburb of Vancouver, British Columbia. Hanchen said that while Northern Gold has specialized in marketing granolas, it recently upgraded its plant to manufacture cereal bars as well.

Everything from bars to nuts
Hanchen said that as Weetabix has expanded in North America, the firm has constantly looked to broaden its product line. “Our plants are not redundant,” Hanchen said. “They complement each other.”

The main Weetabix plant in Massachusetts also specializes in manufacturing what are known as private-label cereals. These brands are similar to name brands like Corn Flakes or Cheerios, but are marketed by a supermarket chain or by other small-scale food companies. The company’s first such product in 1983, was called Crisp Rice.

In order to manufacture such a large array of cereal products, the Weetabix facility can produce everything from traditionally cooked cereals to gun-puffed varieties to extruded or shredded cereals. Thus, the firm realized right from the start that it could also market these products as ingredients to other food makers. Weetabix also sold its crisp rice to manufacturers of granola bars or crunchy chocolate bars. Nestle, the global chocolate firm, is one of its best customers.

Hanchen said that a selling point for the Weetabix-made ingredients is that, because of the firm’s experience and large capacity, it can produce a better quality product for a customer than could be produced in house. He said that Wheetabix also can package its products in anything from a one-ounce serving to a 400-pound tote, which is used to ship corn flakes without breaking them.

Although makers of granola and cereal bars are major customers, Weetabix also markets its ingredients to other types of food makers. Its corn flakes are sold as a coating for fried chicken. Another ingredient Weetabix has developed is called densified rice, with two to three times the density of traditional crisp rice. It has been successfully marketed for incorporation into a salad topping where the product lends the texture of a nut without any of the fat, in a topping for prepared fruit desserts, and as an ingredient in a health bar. Weetabix also manufactures a rice soy nugget, which is sold to the fast growing protein-bar market.

A privately held company, Weetabix does not disclose its sales figures, but Hanchen said the North American unit has been able to generate sales growth even in the face of the ongoing economic slowdown.

“Nothing is 100 percent recession-proof, but the nature of our business allows us to have some growth even in down economic times,” Hanchen said. He noted that during a recession consumers are more likely to buy the private-label products than the more-expensive name brands.

“On the ingredient side, sometimes the slow economy helps us,” he added. “That’s because customers who are unwilling to upgrade and remodel their own plants come to us instead, and ask us to do it.” As for the future, Hanchen said that Weetabix’s engineering team is at work on an undisclosed new product line “that will be exciting for us and our customers.” Whatever the new line is, you can be sure that it will be a product of “graingineering.”