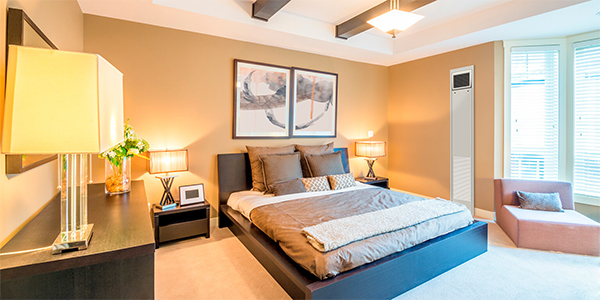 For more than 40 years, International Environmental Corporation (IEC) has dedicated its business to the principle that the inside environment is just as important as the outside. IEC’s products are, in fact, crucial to maintaining air comfort in all varieties of indoor settings – home, work, recreational buildings and institutional buildings. Its signature hydronic fan coils and air handlers upgrade the air quality in such settings as hotels, motels, office buildings, apartments, condominiums, schools, hospitals and nursing homes.

Based in Oklahoma City, IEC plays an important role as part of the Climate Control business of LSB Industries, Inc. According to LSB’s 10-K filing for 2000, increased sales led the Climate Control sector to an 11.5 percent increase in net sales last year and an 11 percent increase in net income. This sector also boosted its order backlog from about $22.1 million on Dec. 31, 1999, to $26.7 million exactly one year later. The Climate Control business also includes ClimateMaster, the manufacturer of water-source heat pumps profiled in US Industry Today’s September 2000 issue. The Climate Control unit’s total 2000 sales of $130.6 million give it an approximate 42 percent share of the U.S. hydronic fan coil/water-source heat pump market, whose annual sales are estimated at about $310 million a year.

IEC has also outperformed the market as a whole, which has grown by an average of 8 percent a year for the past five years. The company has drawn strength from several market developments, including the growth in overall new construction, the aging of the installed base of existing units, the introduction of new energy-efficient technologies, upgrades to central air-conditioning equipment and, in particular, to more stringent government regulations over the use of ozone-depleting refrigerants in HVAC systems.

IEC’s hydronic fan coil technology is well placed to take advantage of the latter development. Hydronic fan coils condition the air in a room with heated or chilled water, which travels from a centralized boiler or chiller through a system of water pipes. These hydronic fan-coil systems are also quieter and have longer lives and lower maintenance costs than comparable systems.

Modular Squad
IEC offers the industry’s broadest product line in hydronic fan coils. The company produces five models in multiple configurations, which include standard vertical, horizontal and high-rise units. The company also offers customized products through its flexible manufacturing process, enhancing its competitive position in this market. Included in each of IEC’s products are standard features that reduce the costs of both installation and maintenance. Thus, it’s no exaggeration to say that IEC offers the nation’s most frequently used line of fan coils.

The company has gained worldwide distinction as the creator of the Modular Hi-Rise fan coil. The Modular Hi-Rise’s features are prime examples of how IEC designs its products to make its customers’ work easier. The Modular Hi-Rise comes with return-air panels, which provide several benefits. These panels give easy access to the coil, the fan and the electric-heating and valve sections. This aspect also makes it easy for the user to change filters and conduct routine cleaning and maintenance. The Modular Hi-Rise also includes integral risers to make the product easier to install, thus saving customers hours of labor at their job sites. IEC also clearly tags its units so that, when they arrive at the job site, they can be taken to the specific zones for which they are intended, thus reducing delays from guesswork.

IEC’s creative abilities are not confined to fan coils. The company recently introduced the UV Ultrashield(tm), an ultraviolet lamp for HVAC systems. The new product is, in fact, the only UV lamp with a patent-pending UVC tube. The UV Ultrashield(tm) safely and effectively eliminates the mold, mildew and bacteria that accumulate in HVAC systems by attacking them where they originate, thus enhancing the quality of indoor environments. IEC designed this product so that it is inexpensive, easy to install and shatter-resistant, making it safer to handle than most other UV lamps.

Building the Future
IEC can claim to be more than the industry leader in both market share and innovation. The company has achieved a substantial record in the quality of its products as well, whose performance has been certified by the Air Conditioning and Refrigeration Institute (ARI), the industry’s most respected trade organization. IEC’s customers can be assured that its units will operate as specified. Its products are also certified by Underwriters Laboratories and under the joint U.S. and Canadian safety standard C 22.2 No. 236-95.

IEC, along with its ClimateMaster sister operation, has a wide-ranging customer base that includes mechanical contractors, original-equipment manufacturers of HVAC equipment and distributors. The shape of the construction industry, primarily the commercial sector, will continue to drive IEC’s growth in the years ahead. The prospects are promising. Even with the economy getting softer, new construction in both sectors continues to move along. Plus, as long as existing buildings get older, they will need retrofits in their HVAC equipment. The entire Climate Control unit has set its strategy to compete in the market for renovation and replacement of commercial and institutional HVAC equipment.

The creative element will also continue its primary place in IEC’s culture. In one of its most recent product launches, the company has met the challenge posed by single-zone ventilation and dehumidification where outside air is used for air-conditioned buildings. Its new Conditioned Air fan coil unit uses a face-split coil and segregates the incoming outdoor air from the room return air, thus conditioning both air streams more effectively while maintaining lower relative humidity in the room space. The new product’s design also includes a circuited split coil, which continuously circulates cold water through the outside-air portion of the coil. It also features a separate control for the return-air portion of the coil, which maintains a precise room temperature. All through both functions, the unit’s fan operates continuously to provide proper air movement.

More recent numbers continue to demonstrate IEC’s wisdom in operating within its niches. For the first half of 2001 (according to LSB’s second-quarter 10-Q filing), the Climate Control unit posted net sales of $70.8 million, 10.2 percent higher than for the first half of 2000. IEC has proven that it can maintain a healthy environment for both its business and for the air quality of the buildings in which its products are found.