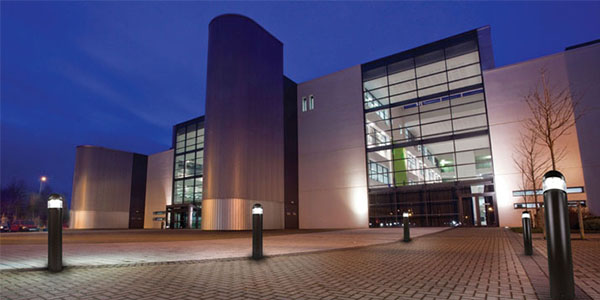 Many of the most innovative businesses in the world started in a garage. In this case, a Brooklyn garage. It was 1947 and Phil Stone began manufacturing items such as lampholders for use over entranceways, under eaves, and over signs. But Stone didn’t just manufacture the product; he manufactured categories of products and made sure there were accessories for each.

Stonco, now of Union, N.J., along with sister company Crescent, of Barrington, N.J., now operates under the Genlyte/Thomas family of companies. The vast product offering still includes Stone’s original 150L and 30KL medium base lampholders, as well as the 3300 series lampholder. In addition, Stone’s innovative spirit lives on in the current team’s strategy of employing technical skill coupled with the desire to create truly unique products. “Stone created products in the categories of good, better, best,” relates Director of Marketing Phil Henry. The 3300 was described as the good lampholder and the 150L was considered the best. In this way, any buyer would be assured of a quality product in a particular price range. “He could sell up or down, depending on whether price or features were an issue,” Henry adds. “And he was always trying to build features into a particular product family and always offered his products contractor grade.”

Eventually, Stone outgrew his garage and moved to Kenilworth, then bought a larger facility in Union in 1969. At the same time, a man by the name of Glen Bailey, a vice president with ITT, equipped with a vision that told him that the many fragmented lighting companies across the country could better serve their niche market under one umbrella, formed a lighting division called Keene Lighting. The first company he bought was Stonco. Bailey eventually fulfilled his dream and acquired companies across the country, each with its own specialty; he eventually formed Genlyte in 1983. Genlyte came together with Thomas in 1998.

Stonco’s area of expertise has been focused on commercial and industrial users, and its products are sold through electrical distributors and electrical contractors. In a manufacturing facility measuring 175,000 square feet the company turns out an extensive lineup of products in categories that include: HID floodlights; surface; area; industrial; lampholders/quartz; motion sensors; portable/temporary and landscape, as well as accessories for each. Stonco still delivers the attentive customer service that gives companies a distinctive advantage. Its representatives and distributors are equipped to provide the best service and technical support and to further meet requirements, the company maintains more than 35 stocking warehouses coast to coast.

New products shine bright
Stonco describes itself as being “contractor friendly,” consistently designing products with the contractor in mind. “We always make sure we talk to the contractor regarding opportunities, and problems.” The company works closely with giants such as Phillips Lighting and its Advance Ballast division to manufacture many different types of lamps and lighting fixtures. For example, its T-Bay fixture combines the latest in lamp and ballast design in a linear fluorescent product as a convenient, cost-effective alternative to HID lamps used in large open areas such as warehouse facilities. The T5 T-Bay linear fluorescent fixture for instances in which HID technology is just too slow or not energy and cost efficient has been a boon for warehouses in which energy efficiency is a top concern. “This produces the same light for half the energy cost and in the Northeast, where the cost can be as high as 12 to 15 cents a kilowatt hour it makes a lot of sense,” says Henry. But aside from cost and energy savings, the fluorescent lights activate immediately and unlike HID, need no warm up.

Consider: A four-light, 54-watt HO T5 T-Bay requires only 239 watts as compared to the metal halide which consumes 454 watts, a 50 percent savings in energy use. In addition, the T-Bay T5 produces brighter, more even illumination. Contractor-friendly, the T-Bay T5 is easy to install and maintain. It accepts multiple suspension methods including three-quarter-inch threaded pipe for direct replacement of existing high bay fixtures. Ends and reflector panels are hinged for easy mounting, wiring and quick access to the ballast chamber.

Bringing things to light for GE
“We pride ourselves on having introduced many new products and innovative concepts,” explains Henry. Among these was the SLA mini flood, invented from a need to condense a powerful, longer-lasting lamp into a smaller unit. Prior to 1980, says Henry, the HID flood light was a large piece of equipment because the lamp was big. Then GE devised the technology to reduce the large lamp to be comparable with the size of a table lamp. The problem: No fixtures had been designed to contain this because all products made to serve this purpose were built on a larger scale. “GE came to us to design the fixture,” says Henry. The company modified an existing product, the CPH quartz lampholder, and incorporated it into what is now called the SLA mini-flood. The lamp can be used in areas such as apartment complexes, where more light can be provided at a fraction of the energy. Prior, says Henry, lamps burned out in 750 hours; this lamp burns on average of 24,000 hours – quite a difference, in terms of maintenance. The company also develops and markets the CPH for areas such as billboard sign lighting, tennis courts, and sports playing fields.

In 1980, Stonco introduced the low-wattage HID in conjunction with its SLA mini-flood, a product that, in Henry’s words, hit the marketplace “like a rocket.” It leveraged that concept to produce the WPS wall prism, ideal for security, accent and perimeter lighting; applications include entranceways, garages, tunnels, overpasses and alleys. “Prior, nothing like this had been available,” Henry says. “It was very innovative.”

As it continues to employ its resources to create ever more efficient lighting fixtures and technologies, Stonco maintains its pursuit of innovation, a drive that propelled it forward in the early years and no doubt will help it to continue to meet the demands of big names such as GE. Focused on providing the best solution for lighting applications, Stonco will continue to generate products that are easy to install and give great performance.