Why another Trump trade bombshell on plans with the World Trade Organization (WTO) may be coming up.

Because Trump Derangement Syndrome will likely prove tougher to cure than the coronavirus, many critics still insist that the President hasn’t worked hard enough to transform America’s foreign trade policy from an exercise in offshoring and economic giveaways into an engine of domestic growth and employment.

These critics badly need to check out a recent Bloomberg News story about Mr. Trump’s plans for the World Trade Organization (WTO), the international body legally authorized by most of the world’s economies to facilitate the negotiation of global trade rules and agreements, and arbitrate disputes. According to reporters Bryce Baschuk and Jenny Leonard, the President is considering a plan that in two bold steps would wipe out many of the barriers preventing U.S.-based producers and their employees from competing with foreign rivals on substantially more equal terms.

These barriers are called bound tariffs, and represent the ceilings that WTO members have agreed to via many rounds of negotiations to place on their duties on imports. What’s most important to know about these tariffs is that (a) they can vary tremendously by product and (b) they can also vary tremendously by country.

That is, WTO members are under no obligation at all to tariff any competitor country’s goods or services at the same rate imposed by that competitor. They’re simply required to promise to apply the same levies on any given product or service wherever they come from, and to keep them at or lower than the maximum rates they’ve agreed.

For example, if the United States has agreed to a bound tariff of five percent on widgets, it can’t impose higher widget duties on any countries no matter what widget tariff rates its own companies might face abroad, and it must impose the same rate to widgets from all countries.In other words, it’s strictly verboten to go beyond that bound tariff rate if Washington believes U.S. widget makers face inequitable foreign competition. In that case, American policymakers would only have any retaliatory option at all if its own current widget tariff levels (called applied rates) were below the bound level (a decision that could be justified by a wide variety of economic or political considerations). And that option would only entail raising the current tariff (called the applied rate) to the bound rate. No higher.

(Importantly, there are certain circumstances in which countries are allowed to deviate from this uniform global tariff rate on individual products and services – i.e., from a principle known as “non-discrimination.” One of the most significant entails trade agreements with each other, but not with the rest of the WTO’s membership. At the same time, thee signatories are not permitted to assess tariffs on non-signatory countries higher than their bound rates. They can only assess each other lower tariffs.)

So if the U.S. government is unhappy because its own applied widget tariffs are only three percent, but another country’s are 20 percent (don’t laugh – such rates are anything but uncommon, as shown in the little map below, in which the darker the color of a country, the higher its bound rates), Washington’s toughest unilateral legal option if that country raises its widget tariffs to its higher bound rate (say, 30 or 40 percent – also hardly unknown , as the map make clear) would be to increase its own levy to the much lower bound rate (only five percent) to which it’s already agreed. 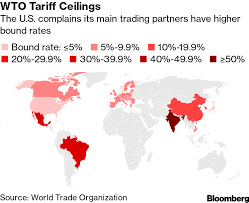 And as the Trump administration repeatedly has complained, this is exactly the situation that its predecessors have put the United States in for decades. By the most commonly used measure (an average weighted to reflect the magnitude of each product’s trade flows), U.S. bound tariffs are 1.6 percent – one of the world’s lowest rates. And about half of all industrial goods (which represent nearly 70 percent of total U.S. imports), enter the country completely duty-free.

The reaction of pre-Trump administrations whenever any supposedly neanderthal protectionist types would bring this up? Condescending shoulder-shrugging accompanied by various self-righteous bloviations about “international law,” “the rules-based global order,” “enlightened self-interest” – even “free trade.”

According to the Bloomberg article, that may change very soon. The Trump administration has decided that it’s going to start negotiating in the WTO for more equitable tariff arrangements – without any expectations of reaching an acceptable agreement. But when the talks break down, Washington won’t meekly accept failure. It would go ahead and impose its own higher tariffs unilaterally.

For the record, the U.S. Trade Representative’s office has officially denied that it’s even considering such plans. But as Joe Biden might say, “Come on, man!” Where do you think Bloomberg got this idea? It’s clearly a leak designed as what Washington for decades has called a trial balloon.

Now it’s true that this step wouldn’t deal expressly with non-tariff barriers around the world – which have grown more important than tariffs, and where the deck is stacked at least as inexcusably against American producers as it is with tariffs. At the same time, U.S. tariffs that are high enough would make a big difference on this score.

But even if they didn’t, closing the tariff gap would be an undeniably disruptive change in U.S. trade policy. And unless you view the Bloomberg piece as total hooey – and ignore a thoroughly game-changing China trade deal that leaves in place U.S. tariffs on hundreds of billions of dollars worth of prospective Chinese exports to the United States , and that creates a dispute-resolution – system dramatically tilted in favor of the United States — you have every right to disagree with the direction of Mr. Trump’s policy changes. But you have no right to dismiss them as trivial or cosmetic.