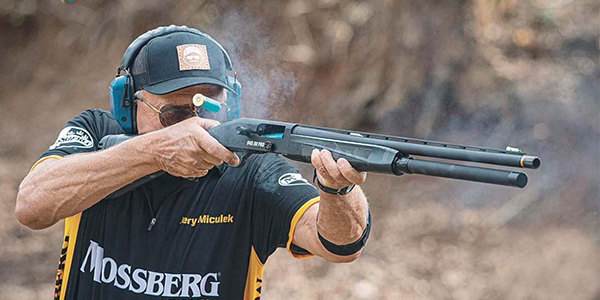 You don’t have to be a collector of Mossberg & Sons firearms to appreciate the craftsmanship and economy of each product. That’s not an easy balance to strike in even the most mundane of products. The fact that Mossberg has maintained its mantra of “More Gun For The Money” for more than 85 years clearly shows that it’s a company that knows how to keep a target set in its sights in every way.

Actually, there are thousands of avid Mossberg collectors in the United States and abroad, particularly in South America and Europe. But that by no means should suggest that Mossberg shotguns, rifles, pistols, scopes, cases, accessories and component parts are relegated to display cases in personal studies and museums. The fact is that there are many current Mossberg customers from a diverse cross section of American culture.

Picture a boy hunting with his father walking a field at dawn. A quail lifts into the air at his approach and the boy lifts his Mossberg 500‚ Pump Action Shotgun, takes aim, and squeezes the trigger. His first game bird drops out of the sky.

Or imagine a police officer holding a similar Mossberg 500 model. He and his partners must break through a door to apprehend an armed felon. He aims at the door lock, squeezes the trigger, and in a flash the door is open and the criminal in custody.

Soldiers in the armed services may carry the Mossberg 500, because it is the only shotgun to meet or exceed Military 3443 specifications. So hunters, law enforcement officers, and the armed forces all depend on Mossberg firearms, and the feeling is mutual, as Mossberg in turn depends on its varied customers for business and feedback about its products.

“Mossberg has a reputation for innovation, which means that we never rest with the status quo,” said Vice President of Sales and Marketing Mark Kresser. “Our men and women constantly strive to improve and update the capabilities of all Mossberg products. In accomplishing this goal, we recognize each improvement is a part of the ‘shooting system’ approach and most are designed to fit the shotgun you bought years ago. “Our design and innovative edge is truly changing the way shooters use shotguns and rifles. We are particularly proud that our Mossberg® pump shotguns are the only shotguns purchased by the United States government that meet or exceed Military 3443 specifications. It is this basis of unquestionable quality that drives Mossberg to bring reliable, well-built shooting systems to you at an affordable price.

Oscar worthy story
The company was founded by budding inventor Oscar F. Mossberg who emigrated from Sweden to the U.S. in 1886, settling in Massachusetts. According to the official “History of O.F. Mossberg & Sons, Inc.,” written by collectors Victor and Cheryl Havlin, Mossberg associated with fellow Swedes, first finding work in a boiler factory, then later joining Iver-Johnson Arms and Cycle Works in Fitchburg, where he was initially assigned to the bicycle department. Young Oscar didn’t stay there long because his ingenuity and ability to contribute to the design and production of handguns became evident.

According to the Havlins, Mossberg’s years with Iver-Johnson were critical to his development as an inventor and businessman. He soon played a key role in several patents at Iver-Johnson and, perhaps most importantly honed his attention to making guns more so for common citizens rather than the elite class. In fact, it’s quite possible that the corporate motto of Iver-Johnson “Honest Goods at Honest Prices,” inspired Mossberg’s “More Gun for the Money.”

Eventually in 1919, Mossberg set out on his own, launching O.F. Mossberg with the Brownie, the first of its kind 4-shot pistol, which “enjoyed evolutionary improvements in design, construction and cosmetics that led to a 13-year production run of 37,000 guns,” according to the Havlins. Worth about $400 today (in mint condition) the Brownie sold for about $10.50, finding solid sales in the U.S. and the South American market. Its success allowed Mossberg to move his company to New Haven, Conn. “For the first three years Mossberg… existed solely on the sales of the Brownie pistol, while this helped expand the business and increase staff, the company needed to expand its offerings, and in 1922, Mossberg added the first of a series of hammerless .22 rifles to their line. Mossberg’s first rifle was called the Model K,” according to the Havlins’ book.

War efforts
From then on, the company first under Oscar Mossberg’s direction then under his two sons, Iver and Harold, grew and expanded its products lines, becoming one of the foremost makers of firearms in the country. And when the country entered World War II, so too did the business of Mossberg. Its market shifted from 27 percent military to 100 percent and the company added 200 employees for a total of 500 working three shifts around the clock to meet the demands of the military.

“After Pearl Harbor, when it was evident that we were all in this war, we decided not to expend any effort or money for so-called commercial or institutional advertising, but decided then and there that all of our advertising effort should be devoted to a practical campaign that would aid the war effort,” stated Harold Mossberg in a letter published in The American Rifleman.

According to a letter from Harold Mossberg, the company initially provided the military with.50 caliber machine gun parts and .22 bolt-action training rifles. Production increased to offer a slightly revised Model 42M, the Model 44US, .22 caliber bolt action rifle especially designed for and approved by the War Department. This rifle proved popular and successful in military training and was later adopted by the Navy Department in a preliminary rifle training program, which was especially important since it was estimated that as little as 2 percent of inductees knew anything about rifles, Harold Mossberg is recorded as saying.

While soldiers and sailors fought a war overseas, Mossberg found itself in a battle of its own with well-known rival Remington, Inc. Years later, Allan Mossberg, Iver’s son and eventual president of the company, recounted the competition between the two gun makers during the war:

“The government came to Harold and said we want a survival barrel that will fire a 60 percent pattern at 30 feet, so he developed one that would do 70 percent. In the mean time, Remington came out with their second, improved cartridge and it also achieved 70 percent pattern in the standard pistol at 30 feet. The government wanted something better to justify purchasing smoothbores. They asked Harold for an 80 percent pattern. He went back to the shop and produced one that patterned at 85 percent, and then they asked for 90 percent, but by the time he could get to it, the war was over.” By the time Alan Mossberg assumed leadership of the company in 1967, the marketing emphasis shifted primarily from the military to hunters and marksmen, which now today accounts for 80 percent of its business (20 percent law enforcement and the military). Interestingly, to add star power Mossberg’s marketing, the company enlisted celebrities like Robert Stack, famous for playing Eliot Ness in “The Untouchables” television series and Roy Rogers the legendary cowboy singer, as pitchmen.

Family tradition and future
Led by Iver, a fourth generation Mossberg family member, the company now has 125 employees in its present facility located in North Haven, but has an additional 400 employees in its Maverick manufacturing plant in Eagle Pass, Texas, two hours south of San Antonio. The Maverick brand is a well-known brand of pump shotguns used primarily by members of law enforcement and hunters of upland game and water fowl.

Said Kresser, Mossberg’s longstanding reputation as a highly innovative shotgun maker is being further extended to a new rifle line known as the All Terrain Rifle. “We really saw an opportunity with capturing more shelf space from our competitors by entering the market with a product positioned above entry level but at a cost-effective price point,” said Kresser. Hence, the All Terrain Rifle, which Kresser credited with rave reviews for both durability and accuracy.

With a proud heritage emblematic of the American dream, Mossberg has been a leader in introducing important design breakthroughs to the firearm industry. Many product features pioneered by Mossberg are now the standards by which all modern firearms are judged.