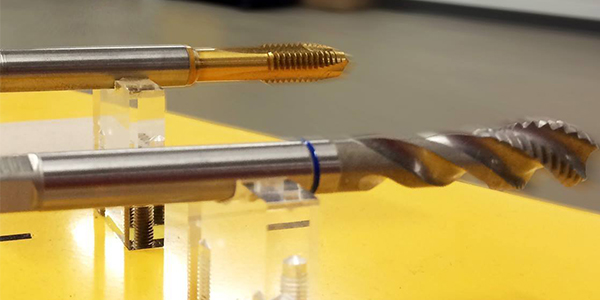 Guhring of Brookfield, Wis., has invested in technology and manufacturing to provide advanced cutting tools.

Guhring, Inc., the U.S. sub- sidiary of Guhring oHG of Albstadt, Germany, is using its strong sense of traditional manufacturing excellence to invest in the future. It has based its business here in the United States on what the company likes to refer to as “specials” – which, quite simply, are custom cutting tools designed and engineered for two purposes: to fit exactly the customer’s cutting-tool requirements; and to cut the customer’s costs in hole-making. To maintain this strong record with customers, Guhring challenges itself to keep itself in a leadership position in technology; and to do that – says Donald Jacquart, Guhring’s president – “we have to focus on investing in the future.”

There are several elements to “the future” for Guhring – and technology is perhaps the biggest element. With its recent launch of the SL CARBIDE™ line, the company now possesses the most advanced technology in cutting tools on the market. All of these products are made of the most durable, highest-performing ultrafine carbide substrate offered within the industry. They come with the highest-performing geometries. Seven out of the nine products in the group are made with Guhring’s proprietary FIREX™ multilayer hard coating, which increases heat resistance and toughness, and outperforms the more common titanium nitride coating by two to three times.

Maintaining the highest technology in products means maintaining the highest technology in manufacturing; and Guhring has invested in its machinery as well. The SL CARBIDE™ product family is produced on the company’s in-house, custom-designed, all-in-one grinding stations, described by Tim White, Guhring’s plant manager, as “the latest and the greatest. You can put a blank into these machines and just let them run. Five to 15 minutes later, you have a finished drill. Normally, that blank would have to visit 10 or more different manufacturing stations.” Guhring has invested more than $10 million in adding these new stations to both expand manufacturing capacity and drive down lead times.

The next element of future investment for Guhring is in marketing. The SL CARBIDE™ line has been launched under the marketing umbrella of the “Power of Five.” This catch phrase refers to the superior raw material the products are made of, their high- performance designs, the FIREX™ coating and the manufacturing efficiencies of the all-in-one grinding stations. The fifth part of the Power of Five is Guhring’s new reconditioning service. “If you’ve got a tool that needs resharpening and that has a complex geometry, the chance is you can’t duplicate the original design through your in-house sharpening or with sharpening by a small outside shop,” says White. “Last year, we started a dedicated reconditioning service, in which we have our factory regrind and recoat the tool. We are able to match original tool quality, condition and performance regrind after regrind.”

These “specials” fit into Guhring’s big-picture goal, which is growing in the U.S. market. More particularly, says Mark Megal, Guhring’s marketing manager, “We’re looking to market to any industry that can justify a custom-designed solution. As these companies streamline their production, they’re not carrying as much inventory, and they rely on companies like us that offer fast, value-added custom services.”

Company management believes that with its manufacturing expertise and forward view, Guhring is a natural to succeed at this endeavor. The concept behind this, as Megal explains it, is simple: “We show customers our knowledge on hole-making. We solve their problems and find ways to take cost out of their manufacturing processes. Then they come back to us with other applications and opportunities.”

However, as one old song puts it, little things mean a lot – and one example Megal relates shows just how valuable this simple approach can be to a customer. He recalls, “One customer out east was using seven different tools to make one type of hole. We came in and designed a ‘special’ which was a custom-engineered tool that could do the job of these seven tools in one pass. That tool took the customer’s average hole-making cost from $5.67 a hole all the way down to 33 cents.”

Performance like this comes from more than a progressive look down the road; it also comes from experience, and Guhring has that in truckloads. The U.S. operation has been in business since 1978, but the parent was founded in Germany more than 100 years ago, in 1898. The Guhring founding family still runs the operation, which is now in its third generation of ownership. It began as, and has remained, a privately held firm. “We’re in an industry that has seen a lot of consolidation and buyouts,” says Jacquart. “In the last five years, we’ve seen competitors gobbled up by conglomerates in the metal-working and machining industries. Sandvik in Sweden has done some acquisitions. Here, Greenfield Industries was a big predator, but then it was gobbled up by an even bigger fish, Kennametal from Latrobe, Pa. But we want to grow only through our own products, services and capital investment.”

The all-in-one grinding machines are just one facet of this capital investment. Guhring has furthered its U.S. presence on the facility end, too. Last year, the company completed an addition to its Brookfield, Wis., factory (also the company’s U.S. headquarters), which tacked on 31,000 more square feet of manufacturing space. Also last year, the company opened its new facility in New Hudson, Mich., a 12,000-square-foot location not far from Detroit – and the auto industry which constitutes a large portion of Guhring’s business.

Guhring’s view of the future is clear and totally focused, and stems from its strengths in technology and its tradition. Remarking on that first advantage, Jacquart says, “From our point of view, the investment in technology is not being replicated by other companies. They’re trying to find cost savings by other means, but to us, the true core of any cost savings has to come from the technology. With 102 years of background in the field, there’s no limit to what we can achieve in cost savings through technology.”