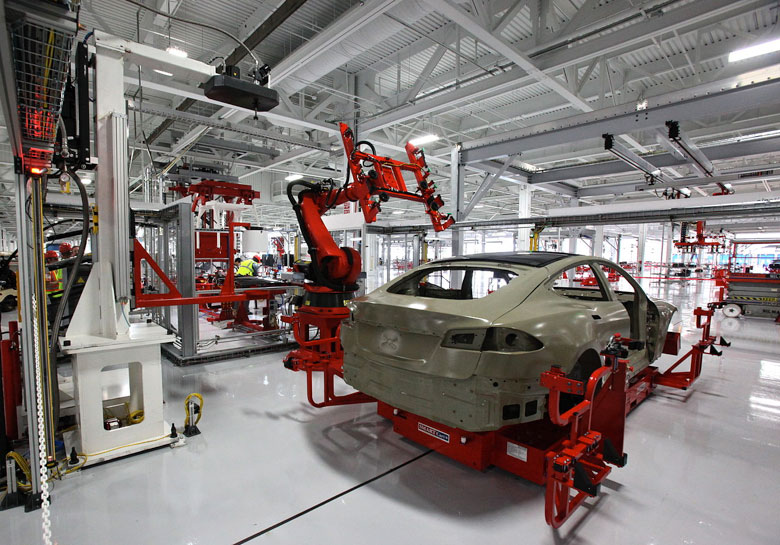 If you were to ask someone where the action in computing was in the 1950s, they might point to the US Census Bureau and the delivery of the first UNIVAC 1 or the University of Manchester, where Alan Turing famously asked, “Can machines think?” One place that might not spring immediately to mind is El Segundo, California, and yet that was, in a sense, the birthplace of the third industrial revolution.

It was there that Hughes Aircraft and Kearney and Trecker established the first automatic, flexible manufacturing line, consisting of three NC-machine tools—one for milling, one for drilling/tapping, and one for boring—each with an automatic tool changer. This marked the dawn of the machining center and the beginning of a market that is now worth more than US$ 106 billion.

Manufacturing is often overlooked when it comes to technological innovation, especially with the rise of software and consumer electronics, but the impact that new technologies have in manufacturing should not be underestimated. The automotive industry is a perfect example.

Automotive manufacturers certainly aren’t shy about innovation: the first industrial robot was installed on a GM assembly line in 1961. However, the automotive industry’s emphasis on reliability means that modern automotive technology advances cautiously. The basis for modern autonomous vehicles can be traced at least as far back as the Stanford Cart in the 1960s, but it’s taken half a century to see significant  investment in the technology from the global automotive industry. Electric vehicles, invented at the end of the 19th century, have taken even longer to catch on amongst automotive manufacturers.

To be fair, there are still a lot of unknowns around self-driving cars. That’s part of what makes them exciting, but it’s also a major red flag for an industry focused on reliability. Much the same can be said for artificial intelligence (AI), which is not only a key component for autonomous driving, but also for connected vehicles and automotive manufacturing. Indeed, these are the applications for AI where consumers, OEMs and tier 1 automotive suppliers will see the greatest impact in the near term.

AI in the Automotive Industry

There are a lot of definitions for ‘AI’ floating around the Internet, especially since ‘artificial intelligence’ became such a valuable keyword, but the simplest definition is that it’s the implementation of quasi-cognitive capacities in computers, most productively for completing discrete tasks in what’s known as ‘narrow AI’. Applying narrow AI to automotive technology typically comes in the form of machine learning (ML), where algorithms or statistical models perform a specific task without explicit instructions.

Modern automotive technology certainly sees ML used in self-driving applications, but with the commercialization of self-driving cars taking longer than expected, the opportunities for ML to impact the bottom line for OEMs and tier 1 automotive suppliers in the near term lies elsewhere. While vehicle connectivity is certainly one of the leading technology trends in the automotive industry, manufacturing connected cars still generates roughly ten times as much data as driving them. Fortunately, machine learning is very good at uncovering insights in big data, and automotive manufacturers are generating more and more each day.

In terms of automotive industry trends—and AI in particular—self-driving cars have seen the most hype but also the least impact. In fact, AI has implications for the entire automotive supply chain and throughout the entire product lifecycle. The insights that can come from applying AI-powered analytics to data generated during vehicle production and on the road open up new ways for OEMs and tier 1 automotive suppliers to collaborate.

Machine learning can identify anomalous manufacturing data, uncovering the earliest indicators of future product failures, reducing the costs of warranty claims as well as the time to conduct a root cause analysis (RCA). Detection models built with machine learning and applied to on-road vehicle data can identify potential failures at incredibly high rates of accuracy—100% in some cases—sometimes with zero false negatives.

Closing the loop between OEMs and tier 1 automotive suppliers, between the drawing board and the finish line—that’s the best use for global automotive industry data today. AI is the key, but it needs to be designed specifically for automotive data: we need Automotive Intelligence.

Despite the obvious potential benefits of autonomous driving, a healthy amount of skepticism from automakers seems warranted (or at least understandable). That’s why thinking about AI in terms of its manufacturing applications could help smooth the transition into broader adoption in the global automotive industry.

For automotive manufacturers and tier 1 automotive suppliers, automotive intelligence can demonstrate a more immediate return on investment at a much lower risk.

Greta Cutulenco is the CEO and co-founder of Acerta Analytics Solutions. She has worked at major OEMs and Tier 1s, including Bombardier and Magna, on system testing, monitoring, and analysis; and at AECL (nuclear) on testing processes. Prior to that, Greta worked for 3 years as a software engineer and web developer. Greta’s M.Sc research at the University of Waterloo focused on automatic analysis of data for testing and anomaly detection. For more information, visit us at acerta.ca or follow us on Twitter or LinkedIn.