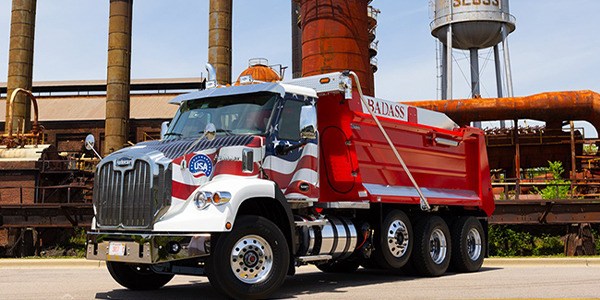 Autocar LLC is a company that manages to combine one of the most tradition-rich names in the history of the automobile industry with a flair for breeding 21st century innovations into conventional vehicle designs.

Indeed, the historic nameplate, which dates back to “horseless carriage” days of the late 1800s, is about the only thing that firm’s first gas-powered vehicles hold in common with the ultramodern version of its Xpeditor low-cab forward, or LCF, refuse trucks unveiled earlier this year.

The new Xpeditor models are available with a variety of engines, including natural gas powered devices that exceed strict new emission standards on the West Coast, ergonomic improvements that boost driver comfort and safety, and light-weight frames that improve stability.

“Our advantage is our flexibility and our ability to react to the market,” said Tom Vatter, the company’s vice president for sales and marketing. He said that for Autocar’s competitors like Peterbilt and Mack and Freightliner, refuse trucks are “a very small part of a very large company, and it doesn’t get the focus that the Autocar Xpeditor gets. That’s what we do – it’s the only thing that we do. I guarantee you that no other OEM could have made all the changes that we have and come to market in the same time frame.”

Pennsylvania roots
The resurgence of Autocar is the result of a July 2001 transaction that brought the Xpeditor truck line from Volvo Trucks North America Inc. to Grand Vehicle Works Holdings LLC (GVW), based in Highland Park, Illinois. In that deal GVW also gained the rights to the historic name of Autocar, the oldest vehicle nameplate in continuous production in the United States. The new subsidiary was christened Autocar LLC.

The original Autocar company got its start more than 100 years ago as the Pittsburgh Motor Car Company. Founded in 1897 by brothers Louis and John Clark, the company’s first vehicle was a gas-powered tricycle. Two years later, the Clarks moved the company to Ardmore, Pa., and renamed the firm Autocar. In 1905, the name Autocar became a registered trademark.

The company began focusing on trucks in 1907, with the introduction of a two-ton truck with shaft driven axle. Autocar was the first truck manufacturer to build wheels with wire instead of wooden spokes. It introduced its first commercial vehicle in 1908, and continued to grow throughout the years. Auto historians cite Autocar trucks as being instrumental, for example, to the Allied forces’ efforts in World Wars I and II.

In 1953, the White Motor Car Co. purchased a controlling interest in Autocar and moved the company to Exton, Pa. White primarily marketed Autocar trucks to companies in the construction, logging, mining, quarrying and oil industries.

Volvo purchased White in 1981 – renaming the company Volvo White Truck Corp. – and retained the Autocar name. After July 1995, Volvo continued to use the Autocar emblem on heavy construction trucks, and in 1997, Autocar celebrated its 100th anniversary.

A key step in the development of the new Autocar was the decision to locate in Hagerstown, Ind. The site offered a former Dana Corp. plant as well as proximity to several key suppliers and another GVW facility in Indiana. But the labor force was key. “That was definitely one of the strengths, that it’s a small town with a good work ethic, and people were looking for work,” Vatter said.

The new plant opened in the fall of 2003 with roughly 115 workers, and the number has already increased to 150. The company should continue to grow with all the innovations to the Xpeditor that it unveiled at the 2004 WasteExpo in Dallas.

11 different engines
One major development is the addition of a new alternate fuel, ultra low emission engine from Cummins: the new L-Gas Plus. The L-Gas Plus features increased displacement, which results in an increase in horsepower and torque ratings to 320 hp and 1,000 ft/lb of torque. The addition of the L-Gas Plus, brings to three the number of Cummins alternate fuel engines/ratings now available on the full range of Xpeditor models.

Those additions bring to 11 the number of Cummins engines offered on Xpeditor trucks, the largest choice of any low cab-forward manufacturer. Autocar also added the new Caterpillar C-11 engine to its expanding lineup of engine choices for the company’s Xpeditor trucks.

Bill Dolesh, vice president of engineering for Autocar, said the engine employs Cat’s new ACERT emissions control technology. “This is the replacement engine for the Cat C-10 and offers increased displacement for longer engine life, plus fuel economy is expected to be excellent due to variable valve actuation and the Cat MEUI fuel system,” he said

The retarders kick in automatically in a matter of milliseconds to start slowing the truck, much quicker than the driver can get to the brake pedal. The retarders can provide up to 85 percent of the braking power for the vehicle, keeping the brakes much cooler so brake lining life can be extended by as much as 10 times.

Interior improvements include a new dash and overhead instrument console design for Xpeditor WX models. The improvements result in significant gains in low-front visibility, knee room, and improved placement of controls and gauges “We’ve also lowered sound levels in the cab and given it a more ‘updated’ look,” Dolesh added.

He credits these improvements to the new vacuum-formed roof, rear panel and door panels that carry thicker, more efficient insulation. “These improvements not only make the Xpeditor more operator-friendly, they give the cab a more rugged, no-nonsense look both inside and out,” Dolesh noted.

In addition, Autocar Truck and Hendrickson International have announced a long-term agreement that would make Hendrickson’s new HAULMAAX heavy-duty suspensions the standard rear suspension on Autocar’s Xpeditor line. HAULMAAX suspensions are recognized as the lightest in their weight class and for the high degree of diagonal articulation they offer. Both characteristics are highly prized by refuse truck fleet operators.

But company officials are proudest of what they call Autocar Solutions, the premier heavy truck customer support program. This service now provides three customer service functions – emergency assistance, parts support and TRUCKSpeX. The 24-hour, quick-response down truck service is provided through emergency assistance, along with a number of other quick-response, direct-to-customer services.

From tricycles to refuse trucks, Autocar has been through enormous change in 107 years. But its commitment to quality and providing the highest level of service has never changed.