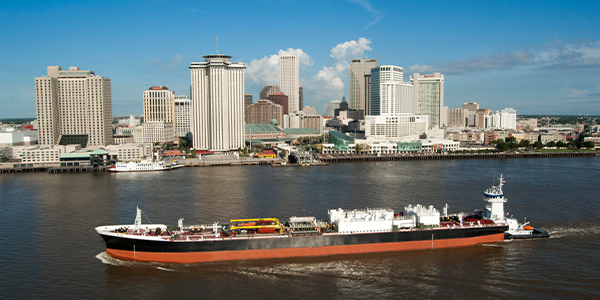 They say that what goes around comes around, and perhaps it’s that philosophy that’s propelling Kirby Corp. the nation’s leader in marine inland transportation, into new markets like containerized shipping, once again challenging rail and trucking for bigger share of the market.

After all, it was the construction of the Erie Canal in the early 19th century and other key shipping paths that first powered the Industrial Revolution. Now, with a surge in imports and consumer goods overwhelming the nation’s rail and truck-based freight infrastructure, low-cost and energy efficient barge transportation is looking more and more attractive.

“One thing to know about water transportation is that it’s really the only unconstricted mode of transportation,” said Joe Pyne, the president and CEO of the Houston-based Kirby. “Highways and rails and airports all have capacity constraints. The coastal business and the barge business do have some constraints, but these constraints can be fixed with minimal dollars.”

In 2004, Kirby spent $4.2 million to buy a one-third interest in the Osprey Line, a leader and innovator in the growing market for container-on-barge, or COB, transportation. After the COB service that Osprey launched between New Orleans and Houston in 2000 proved to be a success, the firm has been expanding the service up the Mississippi River to Louisville, Ken., and Memphis, with additional terminals along the Ohio, Upper Mississippi and Illinois rivers. Experts believe that by the year 2020, container-on-barge could increase marine transport’s share of the domestic freight market from 4 percent to between 15-20 percent.

Changing course
Kirby is also the North American industry leader in the transportation of petrochemicals, pressurized products, refined petroleum products, black oil products and agricultural chemical products by inland tank barge. The $700-million-a-year Texas-based company has experienced steady and solid growth since it decided to concentrate on its barge business in 1987, and is in the process of building 16 new petrochemical barges and 10 new tank barges that handle so-called “black oil” – products such as asphalt.

Along its voyage, Kirby has changed direction quite a bit from the original course charted by the company’s founder John Henry Kirby, a pioneer in the development of the Houston business community back in the relatively early days of the growth of the Texas oil patch. Kirby created an oil and gas exploration and development company back in 1921.

In fact, Kirby didn’t get into the marine transport business until 1969, the year that it acquired an established, Houston-based bargeline called Dixie Carriers Inc., that principally transported petroleum. Like many companies in the 1960s, Kirby grew during that booming decade to become a far-flung conglomerate, with units involved in everything from steel construction to automobile financing, although oil and gas exploration was its principal business.

Out of the blue, into the black
That changed in the mid-1980s, when the worldwide bust in energy prices that crippled the Texas economy caused the directors of the publicly traded corporation to sell off unproductive units and increasingly focus on its profitable marine business.

“They sold the oil and gas, and we took what was a $40-million-a-year company in 1988 and made it into a $700 million company,” Pyne said. “We did it primarily through acquisitions and some internal growth.”

Pyne said that while Kirby flirted with “blue-water” transportation business during those years, by the late 1990s the firm had decided to make inland traffic its main business. After that decision Kirby acquired Hollywood Marine, which was one of its largest rivals, in 1999, and in 2003, Kirby also acquired the inland tank barges of SeaRiver Maritime, the U.S. marine transportation affiliate of Exxon Mobil.

Today, Kirby employs roughly 2,400 people – all in the United States. In addition to the corporate headquarters in Houston, the company has a large training center in Channelview, Texas, with operations centers there and in Corpus Christi, Texas, Baton Rouge, La., and Greenville, Miss. Kirby has a number of other coastal facilities, and its diesel engine subsidiary also has facilities on the Gulf Coast, East and West coasts and in the Midwest.

Pyne pins the company’s hopes for future growth on the growing realization that “inland barges are probably the most efficient mode of transportation, moving 16 percent of the country’s freight at 2 percent of the cost.”

The nation’s inland and intracoastal waterways cover some 12,000 miles and a surprisingly large swath of the United States population, from Pennsylvania to Oklahoma and as far north as Minnesota, with a large network covering the Gulf Coast region from Texas to Florida. Currently, Pyne estimates that about two-thirds of the company’s business is related to petrochemicals, which are concentrated heavily in the Texas and Louisiana corridor.

“Our business is very much tied to the U.S. economy,” Pyne said. He broke it down currently as 65 percent petrochemical products, 20 percent black oil, 10 percent refined products and 5 percent agricultural. Pyne thinks that the move into container-on-barge will continue the company’s impressive growth, which has averaged about 18 percent a year. In addition to traffic and congestion relief, barge advocates note that reducing truck travel will significantly lower air pollution.

In the meantime, officials at Kirby are finding it a tad ironic to see barges as an alternative to rail and to highway, the shipping modes that largely supplanted them in the 19th century. Now, it seems as though American industry is jumping back into the water.