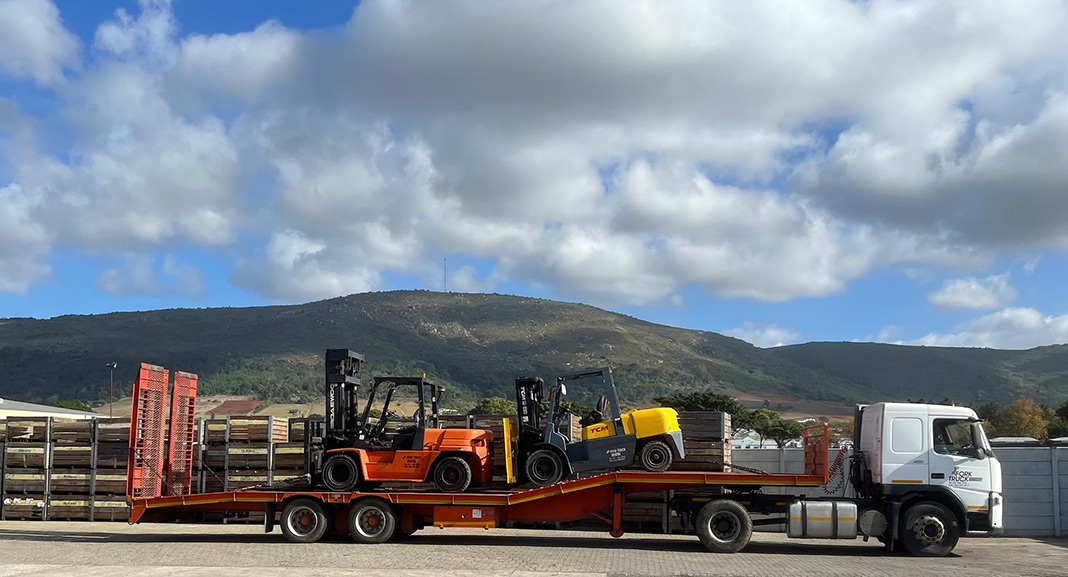 A forklift rental company in the Cape winelands, South Africa, is experiencing less downtime, expenditure and fewer equipment repairs thanks to the introduction of Vesconite king pin and thrust bearings on its forklifts.

This is according to brothers Jacques and Van Rhyn who, together with their father, Japie du Plessis, supply forklifts to clients in the agriculture, fruit and wine industry through JP Fork Truck Rental, a family-owned and operated company.

In the forklift hire industry, clients often say, “rev it like a rental”, indicating that rental machines are used intensively since maintenance and repair costs are allocated to the rental company.

In extreme cases, clients lift loads that exceed the capacity of the machine causing the rear wheels of the forklift to lift and then drop, often causing damage to the axles.

“It caused severe damage to the rear axles, and we would have to collect the forklift from our clients to do the repairs and send some of the parts to an engineering workshop to have them fixed,” describes Van Rhyn.

This was before the rental company moved to Vesconite low-friction wear-resistant king pin bushings and thrust bearings for the main pivot point on the rear axle.

The Vesconite parts replaced the conventional needle roller bearings for the king pin as well as the thrust bearings.

Van Rhyn comments that Vesconite king pin and thrust bearings do break in some instances but in most cases they only deform slightly.

If the part has deformed, it usually is an indication of impact, and the bushing is either replaced or shimmed and can be used again, he says.

Jacques, who has completed a PhD in mechanical engineering, comments that the rental company appreciates Vesconite’s hardness while still being ductile enough not to crack or shatter under impact.

“It can withstand a lot of wear. It is hard and, at the same time, it not brittle,” he notes.

The ability to withstand high axial loads and stress is particularly important in forklift thrust bearings due to the weight of the machine’s counterweight, which needs to be able to absorb impact and not crack or shatter.

The brothers explain that conventional thrust ball bearings were used before the introduction of Vesconite’s plain bearings.

Quantifying the savings from switching to Vesconite is difficult, but the downtime has been significantly reduced, which leads to savings in maintenance and transport costs.

“This has saved a significant amount of downtime and inconvenience for both our clients and ourselves,” he notes.

JP Fork Truck Rental is so impressed with the Vesconite parts that it has installed Vesconite mast liners and trunnion bearings in addition to king pin and thrust bearings in about 80% of its fleet of more than 80 forklifts.

It also expects to have all of its machines fitted with Vesconite parts by the end of this year.

“Clients are happier when you don’t have downtime on your machines,” says Van Rhyn.

“This is not an issue anymore,” he notes.