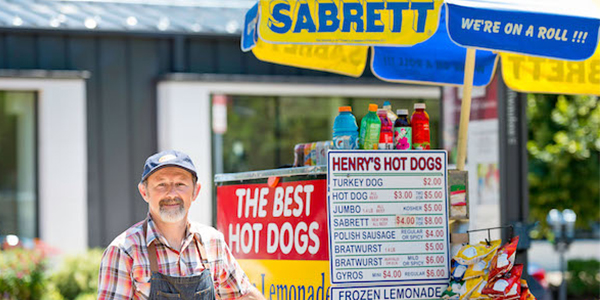 Sabrett is the Rolls Royce of frankfurters according to Mark Rosen, vice president of Marathon Enterprises, the family-owned company that produces the brand. Fortunately, you don’t have to pay $300,000 for a hot dog. It’s is one of life’s little luxuries that anyone can afford. For a few pennies difference (and the company runs regular sales promotions), your customers can enjoy hot dogs made with beef, spices, and.well that’s it. The quality of the brand is assured not only by the best ingredients but also by what’s not in it.

“All domestic meats, nothing imported, nothing frozen. No fillers of any kind. No additives. The label speaks for itself,” Rosen stresses, noting that competitors typically add soya, wheat gluten, additives, and phosphates. “It’s not a sales pitch. We go the extra step to make sure that what the family takes home for itself is what we feed every person who ever buys a Sabrett hot dog. Nothing more and nothing less.”

This approach has built an enviable reputation for taste, quality and service dating back to 1916. Sabrett natural casing frankfurters are the original New York pushcart-style frankfurters that are famous for the snap they produce when you bite into them. These are the franks sold on the streets of New York under the famous blue and yellow umbrellas.

Although Sabrett is best known for all-beef natural casing as well as skinless frankfurters, the company also manufactures a wide variety of meats including hot sausage, kielbasa, salami, pastrami, corned beef and garlic rings. In addition, Sabrett offers many classic condiments and a full line of quality hamburgers.

Sabrett skinless frankfurters are perfect for a roller grill, barbecue, camping or for pan frying. They are available in sizes ranging from cocktail size to foot-long franks. The skinless style franks are the ones enjoyed at stadiums, movie theaters and most amusement parks.

In addition to selected cuts of beef, Sabrett hot dogs are made with all natural spices and special cures. (The company has used the same spice supplier and proprietary special mixes for nearly 80 years.) The hot dogs are put in smoke houses where they are fully cooked to a delicious hickory smoked flavor.

On top of a growing trend toward quality ingredients with no additives, a big priority in the food industry is bacterial elimination. Marathon Enterprises is ahead of the pack here, too, with its futuristic production equipment and processes. Sabrett has implemented the HACCP plan that governs all aspects of food production as required by the USDA. Critical areas are checked and inspected, cleaned and sanitized daily according to the HACCP plan supervised by on-site inspectors. The raw materials, the process, the environment, personnel, storage and distribution are all carefully controlled. The company already meets and exceeds the proposed even stricter USDA guidelines.

“We try to do the things better than anyone else such as using ingredients in our product that brings us to `alternative one’ compliance, which very few companies in the country want to use because it’s so expensive,” Rosen says of the highest level of USDA protection assigned to a food product. In fact, meeting the lofty standard adds about five cents to the cost of a pound of product, which adds up for a company that produces 50 million pounds of frankfurters each year. “It’s voluntary but what we do for our customers is guarantee that you can never have listeria. We’ve found that nobody in the country has come up with a sausage-related product with anything that will give more protection for the company and the consumer from a health standpoint.”

The company has just invested $18 million in the expansion of its 80,000-square-foot Bronx, N.Y., factory. “Why the Bronx? We could have moved the factory anywhere for half the labor costs,” Rosen notes of the more than 300 top-flight workers. “But here we analyze every batch of meat that comes in from the Midwest. Although our suppliers are long-term suppliers, every batch is tested by the family. We know what we’re turning out. We can track any lot, any package, anywhere.”

Placing production alongside the distribution warehouse reinforces quality controls. “The reason we keep it next to our production facility is because the product is in the same building at all times. It just goes from the factory right into the warehouse with no chance of outside influence.”

The factory expansion will vastly increase production capability. Once limited to “only” about two million pounds per week, the company is now capable of turning out 10 million pounds of frankfurters per week.

The factory’s state-of-the-art continuous smokehouse includes high-speed packaging machines capable of 8,000 pounds an hour. “We manufacture pastrami the old fashioned way, smoked at 160 degrees,” Rosen says of the popular sandwich meat favorite. “When we put 100 pounds of meat in, we get back about 70 to 75 pounds of pastrami.”

Marathon Enterprises, which also owns Tremont foods, makers of a wildly popular onion and sauce combo, is poised to expand its markets now that production is so capable. For example, the company is adding a consumer brand of franks in the blanket, an appetizer previously produced only for the wholesale trade. Other new items include party packs and a dinner frankfurter.

Perhaps most exciting, the company will soon launch a Kosher frankfurter brand and look to expand market penetration and reach for its classic Sabrett brand, which is not Kosher but New York deli style.

“Up until recently we couldn’t make enough frankfurters to meet the demand that we had so we tried not to venture too far outside of the U.S.,” Rosen says, “but now we’re in a position to actively go out, market the name and look for new business.” Potential new markets include the Far East.

By the way, you can call it a frank or a hot dog – it makes no difference. But please don’t smother it with too many condiments, unless of course you’re using Sabrett brand mustard, sauerkraut, barbecue onions, and toppings. “Even if someone picks up our hot dog and doesn’t put all the stuff on it, it would still be delicious,” Rosen assures.