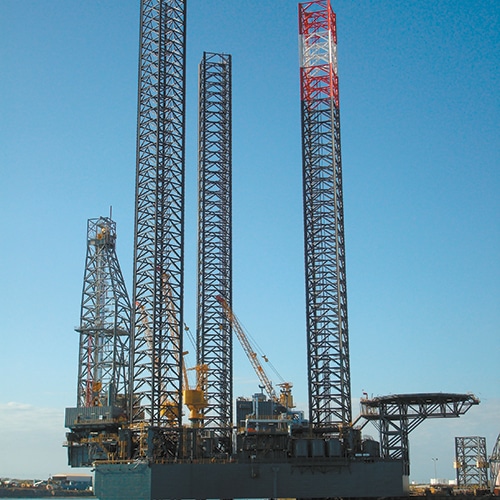 What do you do with a US Navy dry dock that’s being transported back to the states after admirable duty in Europe before and after the Cold War?
You manage to get it to your shipyard in Brownsville, Texas. That way you can boast ownership of one of the largest dry docks in the industry and use that to advance your place as a reliable and good business for the Port of Brownsville and for the energy companies across the globe that depend on your expertise.

The company – and its dry dock – is Keppel AmFELS, a business unit of Keppel Offshore & Marine (O&M), one of the world’s largest offshore and marine groups with a global network of 20 yards and offices. Keppel AmFELS, officially established only 22 years ago, has built up its facilities to become a well-equipped offshore shipyard, engaging in the construction, refurbishment, conversion, life extension and repair of a complete range of mobile drilling rigs and platforms.

Facilities – including a dry dock capable of docking the largest semisubmersible drilling units, and a modern steel processing plant – are first class. The company draws from the expertise of Keppel O&M’s global operating and engineering network in the design, construction and repair of all types of mobile offshore units. Headquartered in Singapore, Keppel O&M has set forth across the globe to acquire new shipyards to further a “near market/near customer” strategy.

RIGGED FOR LEADERSHIP
As part of Keppel O&M, Keppel AmFELS shares the prestigious position of being the world’s largest oil rig builder. Between the shipyards in Singapore and Brownsville, the companies have constructed 60 percent of the world’s rigs over the past 10 years.

Recognizing its important role as a contractor for the energy industry, Keppel AmFELS is set to deliver two rigs, one in January 2013, and a second just started and targeted for completion in 2014 – both going to PEMEX. Rig construction typically falls in the $220 million range. The two newest rigs can dig deep, enabling operators to drill to depths of 25,000 feet for oil.

The company’s equipment defies expectations. “A rig is designed for a lifespan of 20 to 25 years,” notes Keppel AmFELS President and Chief Executive Officer G.S. Tan. “We have rigs out there that are 35 to 40 years old and can be retrofitted for current technologies, reinforced with stronger steel and refitted with newer equipment.”

In the United States, Keppel AmFELS is the only shipyard left building new rigs, says Tan, adding that “it is very difficult for us to compete against Singapore and Korea.”

Indeed, when you compare the welders’ pay rates ($25 an hour for one in the US versus $25 a day for the Vietnamese counterpart) it’s amazing that the company has been able to compete at all from its Brownville base. And while the company is off from its peak of building four rigs at one time with an employee base of 3,000 (now down to 2,500) it nonetheless has been able to weather the economic storm, having secured another major project valued at $250 million, entailing the major upgrade of what Tan describes as a “very big rig.”

In addition to the fact that the Brownsville channel offers a depth of 42 feet as well as advanced infrastructure and other 21st century capabilities, its primary feature is its former Navy dry dock, the envy of other shipbuilding facilities, and a coup scored not only by Keppel AmFELS but by the Port of Brownsville.

COLD WAR ARTIFACT – NOW VIABLE
The dry dock had been operated in Europe to service nuclear submarines. “After the Cold War, the Navy didn’t need it anymore and moved the dry dock back to the United States,” Tan relates. Former Congressman Solomon P. Ortiz brought the situation to Keppel AmFELS’ attention, and the company, along with port administration, managed to get the dry dock towed to the Port of Brownsville from Virginia at a price tag of $1 million, which represents considerable savings (a new dry dock would have cost $50 million).

The dry dock, with a length of 513 feet – and a draft of nine-feet, three inches – was tagged “Los Alamos” (AFDB-7) and initially handled FBM boats before it was converted for use by submarines on Holy Loch, Scotland. In December 1994, Los Alamos was decommissioned and stricken from the Naval Vessel Register. Disassembled into sections and returned to the United States, the remaining six original ABSD-7 sections were transferred to Brownsville in August 1995. Today, it’s known as the Solomon Ortiz Dry Dock at Keppel AmFELS Shipyard. “This is a big asset that enabled us to grow,” Tan said.

Overall, Keppel AmFELS, with 2012 sales of $300 million, has invested more than $60 million in its facilities since moving in, including investments in manufacturing and fabrication shops.

Other capabilities placed Keppel AmFELS on the map. The Brownsville location also was the birthplace of Keppel’s hallmark jack-up design, the KFELS B class, which is today the industry standard for non-harsh environment jackups. Chiles Galileo, the first KFELS B Class jack-up, was completed in 2002.

RULES OF THE ENERGY GAME
“We understand that this business is fundamentally an energy business,” Tan says. The company continues facing challenging EPA regulations as well as new regulations in the oil and gas sectors. One of the reasons oil companies have decided to depart the Gulf of Mexico has been the increase in regulations following the BP oil disaster. Nevertheless, Keppel AmFELS has charted a steady course when it comes to servicing clients.

With an eye on the offshore wind farm industry, whose rig production would fit nicely into Keppel AmFELS’ capabilities (as well as its portfolio), the company has also maintained a leadership position abiding to core values related to health, safety and environment. As far as safety, Keppel AmFELS’ ongoing effort to improve its safety culture has paid dividends, with a recordable incident rate a 10th of the industry norm. The yard was recognized as the best large shipyard in safety management by the Insurance Underwriters, one of the largest US marine workman’s compensation insurers in 2007, 2009, and 2010.

“As a shipyard, we’re consistently number one in the industry,” Tan points out. “We have an open door policy that translates into value for our customers. It comes down to doing what you promise: on time, on budget and on schedule. In the last 22 years, we have a 100-percent record of delivery.”

The company also gives back to the community, contributing more than $1.5 million to improve the lives of families and children in Brownsville through the United Way of Southern Cameron County, awarding thousands of dollars in education scholarships and donations to local charities.

So it would seem that Keppel AmFELS, both in its construction of rigs and its attitude toward the port and community in which it resides, doesn’t do anything in a small way – and that’s a big deal to the companies operating rigs around the world.