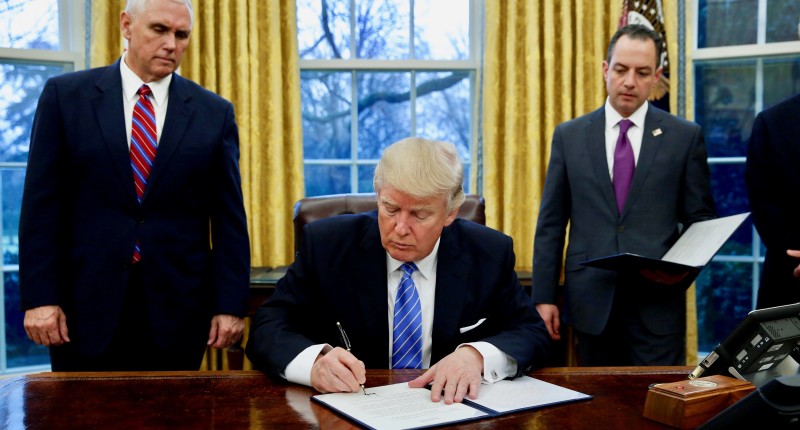 July 17, 2017 — During World War II, the United States and the United Kingdom launched a massive multi-day strategic bombing campaign against Nazi Germany called “Big Week.” The stakes are considerably less apocalyptic, but Sunday began a period for U.S. trade policy that qualifies as a big week, too. Here’s why, and what to look for.

First, Sunday marked the deadline for the 100-day plan announced at the summit between President Trump and his Chinese counterpart Xi Jinping to start bringing down America’s immense trade deficit with the People’s Republic.Some near-term deals were announced in May, and the Chinese seem to be playing along, to at least some extent. But even the American offshoring lobby, which has greatly soured on China since its full-court-press lobbying campaign convinced Washington to expand U.S.-China trade exponentially, has been complaining that agreements of this scope are way too small to solve their own problems with Beijing in the Chinese market. These deals have even less potential to stop most of the damage still being inflicted on the American domestic economy from wide-ranging predatory Chinese economic practices.

The results are due to be announced this week – and may be delayed to take into account whatever can be accomplished by a new high-level economics dialogue that will hold its first session in Washington this week. Will they produce some big wins for the administration and the domestic economy? As I see it, reasons for pessimism outweigh reasons for optimism.

The former include the president’s continuing statements about the threat posed by China’s imports (in this case, of steel), and the awareness demonstrated by his campaign of how varied and unconventional (meaning they went far beyond tariffs and quotas) China’s trade and trade-related transgressions have been. Among the reasons for pessimism, though, are intra-administration divisions that entail both economic issues (with the administration’s economic populists arrayed against what’s been called the pro-free trade “Goldman Sachs” gang comprised of top economic adviser Gary Cohn and Treasury Secretary Steven Mnuchin) and security issues (pitting the populists against traditional foreign policy thinkers like national security adviser H.R. McMaster and Defense Secretary James Mattis, who would sympathize with notions like the claim that China should be courted to enlist its help in sitting on North Korea). In addition, the kinds of staffing woes still dogging the administration typically make sharp departures from a policy status quo difficult to engineer.

In fairness, Commerce Secretary Wilbur Ross, who has forthrightly described the China economic challenge, acknowledged when announcing the 100-day trade plan’s first results that three months worth of talks couldn’t possibly be a game-changer precisely because China’s mercantilism was so pervasive. But in so doing, he unintentionally made the argument – which I support for U.S. trade policy generally – for dispensing with talks altogether and capitalizing on China’s urgent need to export to the United States by addressing this issue unilaterally.

Certainly, this kind of course change would be much more consistent with the president’s numerous campaign statements emphasizing the destructive effect of Chinese predation on America’s economy and working class. It’s also the kind of strategy you’d expect from a chief executive whose non-trade agenda is almost completely stalled in Congress, who’s under intense political pressure, and who could badly use a big economic win in order to prevent major Congressional losses in the next off-year elections – whose campaign cycle will be here before he knows it.

Another big (self-imposed) administration deadline fell yesterday, Monday July 17. It marks the date by which the White House said it would submit its detailed plan to renegotiate NAFTA – the North American Free Trade Agreement. In May, U.S. Trade Representative Robert Lighthizer sent Congressional leaders a brief letter alluding generally to some objectives, but by Tuesday July 18 he needs to fill in critical details. Many might have been contained in a draft letter released March 30, and that plan looked pretty impressive. The big question of course is which ones will wind up surviving – and whether the administration is open to other ideas.

As I’ve written, the most important issue concerns the treatment of “rules of origin” – the provisions of NAFTA aimed at ensuring that any goods sold in the three signatory countries (the United States, Canada, and Mexico) are overwhelmingly made in some combination of those countries. The deal that’s currently in place specifies North American content levels that need to be met to qualify for duty-free treatment inside the free trade zone. But the tariff penalties for goods not meeting these standards aren’t nearly high enough to achieve the goal of increasing the entire region’s competitiveness.

The March 30 letter suggested that the administration would seek origin rules that promote U.S. production and jobs more effectively, but it didn’t say how. If much higher external tariffs aren’t proposed in the plan due tomorrow, it’s doubtful that any reforms will result in any of the non-NAFTA countries making more of their products inside the NAFTA zone. Moreover, it’s of course going to be easier for Washington to persuade Canada and Mexico to go along if it re-emphasizes what President Trump has been saying since his meeting last summer, before the election, with his Mexican counterpart: NAFTA should aim to boost the competitiveness of all three countries.

The brief May 18 Lighthizer letter also suggested obliquely the need to change NAFTA’s dispute-resolution procedures, and the March 30 draft discussed the issue at greater length. But even its recommendations to strengthen America’s authority both to respond to import surges from its NAFTA partners (called “safeguards”) and to apply its own Buy American government procurement rules to intra-NAFTA trade may not go far enough.

As I’ve explained, the fundamental problem is that the current dispute-resolution process treats the three NAFTA countries as legal equals, even though the U.S. market is nearly 90 percent of the total NAFTA market, and clearly remains the most valuable prize for all three signatories. Without closing or somehow changing acceptably, the yawning gap between the NAFTA legal regime and the economic facts on the ground, it’s hard to imagine the system serving U.S. interest on net.

At this point, you might be wondering why I haven’t mentioned NAFTA’s labor and environmental provisions. The reason? Although they’ve been major objectives of Democratic party and other left-of-center NAFTA and broader trade policy critics, as with their counterparts in the Trans-Pacific Partnership (TPP) deal, they’re largely unenforceable. As I’ve asked before, how many American bureaucrats will be needed to run around how many factories in a signatory country (in this case, Mexico) to ensure that companies aren’t abusing workers or dumping sewage into nearby streams? With more effective rules of origin, however, producers in Mexico will feel less pressure to remain competitive versus rivals in China and elsewhere in Asia by offering the worst possible working conditions and ignoring environmental considerations completely.

Finally, there’s the steel tariff issue. The administration has delayed announcing its decision to impose national security-related tariffs on U.S. steel imports, but is expected to reveal its intentions this week. For what it’s worth, the president sounds determined to approve some levies on some countries’ steel. The main question is who the main targets will be. It will also be crucial to see whether and how prominently the announcement emphasizes the need to deal decisively with the underlying problem – the ocean of subsidized steel from China that has flooded and distorted world markets in recent years.

At the same time, there’s a reason for Mr. Trump to punt – or to punt for the most part: At their summit earlier this month in Hamburg, Germany, the leaders of the world’s twenty largest economies (the “G20”) agreed to require an international commission on the subject to deliver a report by November containing “concrete policy solutions that reduce excess steel capacity.” Postponing unilateral action until this mandate is fulfilled could prove a tempting option for a president who doesn’t exactly need to come under fire from new fronts.

Moreover, if the commission’s ideas don’t pass U.S. muster, Mr. Trump would be in a much stronger position to slap the tariffs on everyone, and vow to maintain or even increase them until meaningful, concrete agreements are reached.

President Trump has been sending surprisingly (at least to me) mixed signals on trade since his Inauguration Day two-step – killing the TPP but refraining from labeling China a currency manipulator. Big Week in trade isn’t likely to clarify the picture fully, but we’re bound to know more at its end than we do here at the beginning.