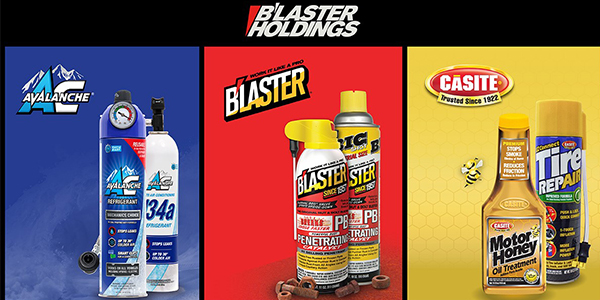 ‘Blaster Chemicals Cos. is marking its 50th anniversary in 2007, and to celebrate it’s hard to imagine anything more appropriate than the prize that it’s giving away to a lucky customer this year: an authentic 1957 Ford Thunderbird in good working condition.

In many ways, the classic car is a perfect metaphor for the Ohio-based company, which for five decades has adapted to numerous twists and turns along the road of commerce. For example, in the last couple of years, B’laster Chemicals, a leader in consumer-based chemical products like nut unfasteners or engine additives, has had to deal with a sharp downturn in spending on automobile maintenance, the consequence of sky-high prices for gasoline.

“You’ve got this lag,” explained William Matthews, the CEO of B’laster Chemicals. “Think of who your customer is: it’s a guy with a family income of maybe $30,000 or $60,000 who’s now spending more out-of-pocket money for gas. He’s not going to spend that money on parts. He’s going to spend it on gas!”

And yet, B’laster Chemicals has seen continued growth in sales in recent years. That’s because the company has long been diversifying its product lines, and has been successful in placing some of its household products with retail giants Home Depot and Lowe’s, a boon to the company’s bottom line. What’s more, B’laster has increasingly looked to a new line of industrial products geared towards plant maintenance, a promising area as plant managers spend more on productivity.

Eye for detail
“We’re still of the size that we’re able to change course very quickly, and respond to marketplace changes, and anything that might affect the customer, in a short period of time,” said Matthews, in explaining B’laster‘s philosophy for success. “Any opportunity that comes along, we‘re going to take advantage of, because of our response time.”

The company also has an eye for detail and marketing. Consider that contest for the 1957 T-Bird, which the firm is currently advertising on special, oversized anniversary containers of its top-selling PB B’laster product for loosening nuts and bolts. Matthews said the company spent over a year making sure it found the perfect model, and in perfect condition.

“We didn’t want to get caught in the trap of looking for a car after somebody had already won it,” said Matthews, chuckling as he recalled how other companies found themselves exactly in that dilemma.

In looking back on the 50 years of B’laster Chemicals, it is almost as if the company has had two distinct lifetimes. In its early years, the company was marked by the invention of its colorful founder, while the second half has brought the marketing savvy to take the ingenuity to customers across the nation.

The tradition of innovation starts with legendary founder William K. Westley, a World War II Marine veteran from the Cleveland area, with a remarkable gift for inventing products, including one chemical that removed lipstick from wall paint and others that revolutionized the car-wash industry and are still well-known today as Blue Coral whitewall tire cleaner and car polish.

Bathtub chemistry
The invention of PB B’laster was almost a labor of love for Westley, who sold his original companies in 1955 and became obsessed with his hobby of boating. Aboard his yacht, Westley, who’s been described by company officials as “a bathtub chemist,” developed a special lubrication product to deal with mechanical problems on the head of marine engines. His best-selling product in the line that became known as PB B’laster was actually invented to help a friend who owned a phosphate mine in Florida, and was unable to loosen nuts in his machinery because of the corrosion problems.

Although the PB B’laster products developed a popular following, especially in the Midwest where the company has always been based, the firm’s era of growth really dates to 1980, when the firm was purchased by Cleveland area investment banker Bernard I. Porter, who later gave B’laster Chemicals its current name.

The company, which is headquartered in Valley View, Ohio, a suburb of Cleveland, is still small, with just 30 employees. Yet it continues to introduce innovative new products to the marketplace, thanks in large part to a successful alliance with a firm called Chemical Solvents that Matthews said “really is like an extension of the company.” Last year, according the executive, the privately held company brought in roughly $20 million in sales.

Matthews said that B’laster Chemicals is looking to continue to grow its revenues in several ways. One of those is to expand its geographic reach. While sales have always been strong, appropriately, in the so-called Rust Belt, B’laster is now looking to increase its name recognition in California and other regions of the West and Southwest where it’s not as well known.

“We’ve done a marketing study to find out where our name is not as well known as we would like it to be, and we will be targeting areas in Texas, in Arizona, and California and right on up the West Coast,” Matthews said. “That seems to be the area where we need to do the most work on our name recognition.”

Indeed, the company did very little advertising until the late 1990s, but in recent years it has greatly increased its marketing efforts both on the radio, where well-known sportscaster Jim Rome has been a spokesman in past years, and with some selected advertising on cable TV.

Now, B’laster Chemicals is growing on a couple of fronts. That includes selling its products in giant hardware retailers like Home Depot, which is now selling four B’laster products, and Lowe’s. One product that is doing particularly well there is its LMT, which stands for Lawn Mower Tuneup, an additive that greatly improves performance every spring.

Fighting rust
Matthews said that one reason for B’laster’s growing success in the retail market is that it has now positioned itself as the alternative to the industry leading WD-40. “We’re more of a product for a guy who’s taking apart nuts and bolts – that’s what we say that we’re for, while WD-40 is for a range of general uses across the board,” he explained. He said growth in the hardware sector added about 10 percent to B’laster Chemicals’ sales last year.

B’laster Chemicals has also continued to roll out a number of new products in recent years, such as its new Corrosion Stop, which allows customers to store items such as snowplow blades outdoors without worrying about damage from rust or corrosion. Matthews said that one reason for the focus on product development has been new California regulations on VOC, or carbon emissions.

Now that B’laster has reached those goals ahead of time, Matthews said more energy would be spent on spreading the word about existing product lines. In addition to its growing number of consumer-oriented retailers, its industrial products will now be listed in the influential Granger catalogue.

So forget about slowing down after a half-century. At B’laster Chemicals, the company that was founded by a bathtub chemist is still having a blast.