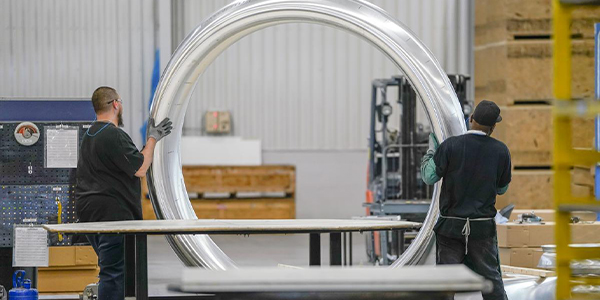 At Spincraft’s Wisconsin location there is an old picture that employees are quite fond of.

It shows Ronald Reagan in the 1960s, when the future president was governor of California, standing in front of a Christmas tree with a popular tree base that for years was a cornerstone of Spincraft’s product lineup. The rotating metal base, 19 inches in diameter, has switches that not only control the tree’s lights but also played tunes such as “Jingle Bells” or “Silent Night.”

Ironically, right when that picture was snapped, Spincraft, an industry leader in metal spin forming and other types of fabrication, with roots going all the way back to 1918, was already launching into a new orbit, one that was propelled by the rise of NASA and the American space program. Even today, Spincraft is a leader in aerospace projects, including titanium fuel tanks and many of the rounded dome caps that are clearly visible on the shuttle and its launching stages. What’s more, the Standex unit is launching headfirst into new space projects, including an evacuation vehicle for the shuttle and the private Space Exploration missions.

Indeed, the motto that is constantly invoked around the Spincraft office carries echoes of the American space program: “pushing the envelope.”

Pushing the envelope
“You’ve probably seen a lot of businesses that are set in their markets but Spincraft is the antithesis of that,” explained Alan Mandell, the sales manager for Spincraft, with headquarters in North Billerica, Mass., and another plant in New Berlin, Wis., less than 20 miles west of Milwaukee. “We’re wide open as to how we want to grow the business. Our success is driven by our ability to push the envelope in the things that we do.”

Today, Spincraft isn’t just a leader in aerospace but also in aviation, where it holds a considerable number of commercial and military contracts, as well as military work on missile parts and components for land based gas turbines. Its impressive customer roster of Fortune 200 companies includes such well-known names as Rolls-Royce, Boeing, Bell Helicopter and Goodrich.

Indeed, one of those top-shelf customers, defense contractor Lockheed Martin, decided to put on the record what many of Spincraft’s clients already know about the firm’s commitment to excellence. At a recent ceremony, the division was awarded the STAR Supplier Award by Lockheed Martin, which recognizes quality, on-time delivery, cost reduction, technical competency and responsiveness. The award covered a three-year time period.

“Spincraft joins an elite group of companies in receiving this award,” Scott Arnold, Director ATACMS Program, Lockheed Martin Missile and Fire Control Division, said in announcing the award. “Lockheed Martin is committed to building a strong supplier base to provide the best value to meet the needs of our customers. We consider our company fortunate to have Spincraft as a Lockheed Martin business partner.”

Like many Space Age companies, the roots of Spincraft are more down to earth. The company was founded in 1918 in Milwaukee. Interestingly, its main process of metal spin forming has been the company’s focus then and ever since, but its product lines have evolved dramatically. At first, Spincraft manufactured almost exclusively consumer products like cookware and stemware, reflectors for streetlights and early types of microwave dishes, as well as its legendary Christmas tree stands.

A merger in 1969
However, the 1960s would prove to be an era of great change at Spincraft. As its product lines moved into the ultramodern world of space, jet aircraft and missile defense, it also attracted the attention of Standex, which bought Spincraft in 1969, the same year that America landed on the moon. A year earlier, Standex had bought a Massachusetts-based rival called Torngren Engineering, and the new parent company merged both operations under the Spincraft name.

Today, Spincraft still operates primarily with its two facilities. Although the plants have somewhat different capabilities, they are roughly the same size at close to 100,000 square feet, and the unit’s 200 employees are evenly divided between the two sites. Mandell said that the division’s annual revenues are in the $50 million range. Spincraft has some of the largest, most powerful, up-to-date conventional and CNC forming equipment in the world. It is capable of forming diameters over 16 feet in Massachusetts and up to 10 feet Wisconsin. In addition, Spincraft’s plants can form materials from light gage to over four inches thick.

Parent company Standex is a multi-industry manufacturer in three, broad business segments: food service, industrial and consumer. Mandell said that Standex, which is based in New Hampshire, not only has been a major supplier of capital, legal and technical expertise, but with operations globally in Europe, Canada, Australia, Singapore and Mexico, it has played a role in helping Spincraft expand its global reach.

“The opportunity is there for Spincraft to take advantage of the Standex family,” said Mandell. Although Spincraft’s main focus has been here in North America, because of its defense work and aerospace expertise. The division also sells considerable product in Europe through its aggressive diversification program and relentless pursuit to become a world-class supplier of some of the most complex fabrications in its markets. The company is well insulated against sudden downturns because of the diversity of its customer base.

Some of the company’s most exciting work continues in the area of space exploration. Most recently, Spincraft Massachusetts contributed to The Boeing Company’s all new Delta IV rocket by building the largest single-piece fuel tank domes in the space industry today and the copper thrust chamber liners for the RS-68 engine (built by Pratt Whitney/Rocketdyne) the only large-scale production liquid fueled engine developed in the last three decades. The Delta IV rocket powered by the Rs68 engine recently lifted a W5 communications satellite owned by Eutelsat S.A. of France into geosynchronous transfer orbit. Spincraft continues to be called upon by the aerospace giants and start-ups alike to develop new forming fabrication technologies “to push the envelope” in support of NASA’s new space initiatives, “The Mission to Moon Mars and Beyond”.

Replacing the shuttle
Furthermore, Mandell said that the company is heavily involved in two major space projects. One is NASA’s Crew Exploration Vehicle, slated for an initial version by 2008. It will be capable of ferrying astronauts and scientists to the Space Station after the shuttle is retired and eventually traveling to the moon and beyond.

“We were actively involved with the space shuttle, and this is the replacement and Spincraft is one of the key suppliers on the launch side,” Mandell explained. He also noted that Spincraft is manufacturing both the first stage and the upper stages for Space Exploration, the private space firm.

In the area of aviation, Spincraft routinely spins jet engine nacelle lipskins with eccentric diameters. This process is used on several aircraft including Canadair’s Regional jets, Gulfstream V, Falcon 2000EX, Lear Jet and Hawker aircraft, to name a few. Other aviation products include combustion liner assemblies, aft centerbodies, engine cowls, exhaust components, cases and support rings, as well as a unique particle separator assembly made from C.P. titanium for Bell/Boeing’s V22 Osprey. Mandell said that reason that Spincraft is able to attract so much work has been its record of innovation in the area of developing new fabrication processes and working with all types of metal. “The spinning process that we’ve developed for aerospace and aviation allows us to offer more robust components, reduced part count that have few welds and less assembly manufacturing time,” Mandell said.

And that is no fabrication.