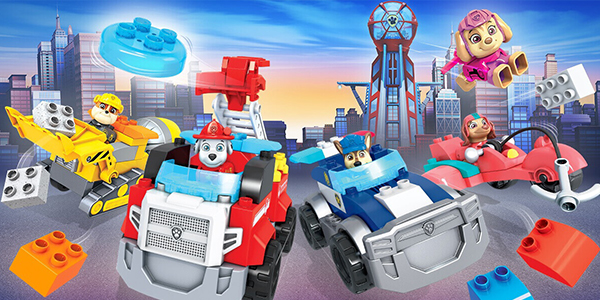 Flash: little girls want construction toys as much as little boys. This change in demographic, part and parcel with a media culture that has increased its scope to broaden the range of choices for little girls, is one reason why leading toy manufacturer Mega Bloks has seen double-digit growth in its pre-school sales over the last several years. “There is a rise in girl building activity – an activity that traditionally appealed more to boys than girls,” notes Director of Marketing Communications Andrew Witkin. “In response to this trend, Mega Bloks has introduced themed-building sets that incorporate girl-preferred role-play elements into classic building blocks.”

It is just another way in which Mega Bloks serves the creative needs of children, by providing toy-building sets that spark the imagination and also aid in other factors of cognitive development. “Mega Bloks is about entertaining children and stimulating their development with building blocks that are fun and educational,” Witkin notes. “Our innovative products offer myriad developmental benefits for young builders.”

Such creative advances in toy making have given the company an enviable industry position; Mega Bloks at present is the world’s second largest manufacturer and marketer of construction toys and the largest Canadian toy company, based on sales. “We believe two companies – Mega Bloks being one of them – account for approximately 80 percent of global annual sales in the construction toy category,” Witkin says, adding, “Mega Bloks has seen a growth of 250 percent since 1999.”

The company got its start as Ritvik Toys Inc. in 1967 and was founded by Victor Bertrand Sr. and his wife Rita Bertrand. Its operations consisted primarily of light assembly and sub-contract injection molding to third party manufacturers. After becoming a leading toy distributor in Canada in the early 1980s, the company reoriented its strategic direction in 1985 when it developed and marketed its first building blocks, MEGA BLOKS®. This achievement brought about the creation of Mega Bloks Inc., which has since manufactured and marketed a broad line of construction toys under the MEGA BLOKS brand name that incorporates a system of interlocking plastic building blocks.

With more than 20 years of consecutive growth, Mega Bloks has grown its operations to include approximately 1,100 employees worldwide. The company, explains Witkin, began its international sales efforts in 1997 and 1998 when it established Mega Bloks Latinoamerica and Mega Bloks Europe respectively. “Mega Bloks’ products are currently sold in over 100 countries either through distributors or through the company’s own distribution network,” Witkin notes.

Innovative leader
A key motivator behind its product success is its penchant for innovation, what Witkin describes as the main driver of the company’s 20 years of organic sales growth. “Mega Bloks delivers added value to retailers and consumers through ongoing innovation, R&D, and vertical integration,” he explains. “Continuous investments in the latest design and prototyping technologies accelerate new product development.”

In manufacturing, he explains, the company achieves the highest efficiency by benchmarking every product on the basis of best cost between its Canadian plant and overseas suppliers. Mega Bloks’ Montreal facility is equipped with the latest technology to optimize productivity while achieving high quality and quick production turnaround. It is complemented by outsourced production in Asia of labor-intensive products with electronics, intricate decoration or other special effects. “This is the Mega Bloks winning combination for speed and value,” he says.

In addition, all product development activities are managed through an internal process, termed the ‘Mega Process,’ designed and implemented in 1999 in conjunction with the Institute of Concurrent Engineering. The company’s in-house research and development team oversees the product development process and works with marketing professionals in a systematic fashion to create innovative new products. The process divides product development into five key steps: concept preliminary design and investigation, detailed design and investigation, development and pre-production and launch. Senior management executives review progress and allocate personnel and financial resources. The ‘Mega Process’ allows management to streamline the development of new products and manage a large number of different initiatives simultaneously.

This activity takes place in Mega Bloks’ 820,000-square-foot facility in Montreal; capabilities include multi-product integrated assembly lines, plastic injection-molding machines and specialized automated counting systems. The facility includes a mold repair and maintenance shop, which enables Mega Bloks to modify and maintain molds for greater efficiency and longevity. Also, Mega Bloks owns all of the molds it uses in its manufacturing process and its “high cavitation” injection molding technique produces a much greater number of parts per mold cycle than the process utilized by its major competitor.

In February 2002, the company entered into a 10-year agreement to lease 437,200 square feet at a facility located in Montreal; this currently serves as the primary distribution center.

Seasoned veterans
Of course, what most drives the sale of toys is the holiday shopping season; explains Witkin, a majority of retail sales occur from September through December. In 2004, approximately 76 percent of Mega Bloks’ sales were made in the third and fourth quarters.

Altering these figures have been major changes in the toy retail landscape over the last decade as larger retailers gained market share from specialty stores. The top four retailers have increased their share of total U.S. retail toy sales to 50.1 percent in 2000 from 41.2 percent in 1991, Witkin points out. “As mass-market retailers have increased their market share, they have demanded an increasing degree of logistical support and sophistication from their suppliers and as a result now use fewer suppliers,” he says. “Mega Bloks is at a competitive advantage as it is efficient in its manufacturing and distribution efforts. Through its ability to efficiently serve its retailers, Mega Bloks has successfully forged long-standing partnerships with retailers.”

The preschool products consist of larger blocks and less complex elements suitable for younger children and are sold under the brands MY FIRSTTM MEGA BLOKS, MAXITM MEGA BLOKS and MINITM MEGA BLOKS. The MICROTM products consist of smaller pieces, require more complex construction and are sold under PROBUILDER®, DRAGONSTM and COMMAND OPSTM. The MICROTM products are primarily marketed to boys. “Mega Bloks’ products are compatible with each other based on the company’s interlocking plastic block system,” Witkin says. “The company’s products are also compatible with products from other construction toy brands. Currently, we manufacture over 125 products that are sold in over 100 countries.”

And to satisfy a growing demand for girl construction products, Mega Bloks has introduced items such as Block Buddies Pony Stable, the Disney Princesses and the Cinderella Pumpkin Carriage. Its gender-neutral preschool products include Block Buddies® Musical Farm, 123 School Bus, Maxi Bags and Mini Buckets. Boy related products include Block Buddies Pirate Ship and TNT Fast Tracks.“We’ve also developed our figurines styling and features making them more visually appealing to boys and girls,” Witkin says. “We have animated our kid favored Dragons product line (5-plus category) and have brought the Dragons universe to life in our Dragons Fire & Ice‘. feature film (in co-operation with BardelEntertainment). The has helped establish Mega Bloks Dragons as a trend setting entertainment and lifestyle brand for today’s boys and the most successful brand in Mega Bloks’ history.”

Mega Bloks also attributes its strong operating performance to the following core strengths:
• Single brand focus with strong brand recognition: Mega Bloks sells substantially all of its products under the widely recognized MEGA BLOKS brand name. In 2004, management estimated that MEGA BLOKS was ranked among the 10 largest toy brands in North America along with Barbie, Fisher Price, Lego and Leapfrog.

• Low cost manufacturer: Mega Bloks achieved gross margins in excess of 45 percent in each of the five years ended Dec. 31, 2004, 2003, 2002, 2001 and 2000. The company’s low cost model enables it to deliver products at a compelling value to both the retailer and consumer. Mega Bloks has a significant cost advantage over its primary competitor due to its use of relatively low cost plastic resins and a high cavitation injection molding process that produces a greater number of parts per mold cycle.

• Strong relationships with the largest retailers: Mega Bloks’ four largest customers, Wal-Mart, Toys “R” Us, Target and Woolworth, together accounted for approximately 49 percent of Mega Bloks’ worldwide sales in 2004. Over the last few years, Mega Bloks has successfully increased retail sales while reducing average inventory balances of its products held at retail. “Mega Bloks’ success at retail lies in its ability to understand retailers’ needs along with the needs of their customers,” Witkin says.

• Licensing: Mega Bloks has fostered longstanding relationships with licensed partners, and has captured incremental growth by complementing original product lines with new themes based on stable properties with lasting appeal. The company has introduced toys based on licenses from Bandai, Disney, Marvel and Nascar. In 2002 Mega Bloks signed a multi-year agreement with Disney and successfully launched products featuring Winnie the Pooh, Princess and Power Rangers. In 2004 the company introduced toys based on new licenses with Marvel, NASCAR, and Teenage Mutant Ninja Turtles. “Among global toy brands, very few have been able to establish the wide age reach of our product lines,” Witkin says. “MEGA BLOKS preschool, which appeals to boys and girls under 5, is the leader in the construction category. Micro MEGA BLOKS is a growing force in the 5-plus segment with an expanding selection of play sets, characters, and themes featuring hybrid design. Our vertical integration and global sales force enables us to develop and distribute popular and timeless toy brands to a world-wide market in short period of time.” He adds: “We have a sound strategy, solid relationships with the world’s leading retailers and licensing affiliates, and experienced teams to execute our plans in every market. Based on the strength of our brand, innovative product development, our creative merchandising initiatives and our expanded retail channels, we are well positioned to achieve sales growth and market leadership.”