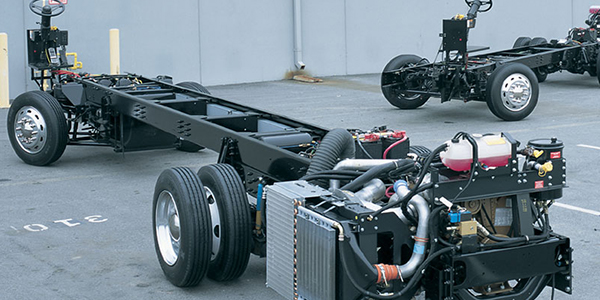 When you send your kids off to school every morning, there’s a good chance that the big yellow bus they board doesn’t look much different from the one you rode when you were growing up. But that’s about to change, with a big assist from a South Carolina-based company, Freightliner Custom Chassis Corporation (FCCC).

FCCC has begun building a new, state-of-the-art chassis for the new Saf-T-Liner C-2 model from Thomas Built Bus. The C2 looks like a cross between a conventional school bus and a jetliner, with its low sloping hood and wide curved windshield that will allow the driver far better visibility than on any rival model. The C2 was engineered with a 55-degree wheel cut that allows the bus to perform unlike any before. It also offers softer springs for improved ride comfort and exceptional maneuverability. The other distinctive feature will be its sleek lines and smooth body panels built by Thomas Built Bus in its High Point, N.C. plant.

“Everything we’ve done at the plant is geared toward improving technology and growing our market share,” said Jack Conlan, the president of Freightliner Customer Chassis, a unit of heavy-duty vehicle icon Freightliner LLC, which in turn is owned by global automaker DaimlerChrysler.

School bus chassis are an important part of what FCCC makes, but the corporation is also an industry leader in manufacturing chassis for recreational vehicles, or RVs, and in the fast growing market segment of delivery vans, where expansion has been fueled by the strength of overnight services and Internet retailing.

100,000 and growing
In October 2003, FCCC celebrated the 100,000th chassis to roll off the assembly line in Gaffney. The unit has come a long way since its more modest start in 1995, when Freightliner purchased an existing manufacturing plant from Oshkosh Truck Corp. In its first year of operations, FCCC produced just 3,800 chassis.

“The Freightliner CEO at the time was looking to expand Freightliner’s presence in the commercial vehicle market, for both school buses and walk-in delivery vans,” Conlan said of the 1995 purchase.

Today, not only does the company employ more than 800 people, but it has continued to grow its workforce in the face of the overall economic slowdown of the early 2000s. FCCC has joined with the nearby Spartanburg Technical College to launch a new, specialized program for motor home technicians as well as a branch of the school where students could receive on-the-job factory training, scheduled to start up in late 2004.

That announcement came as it was hiring 100 new employees to begin a new third shift. Currently, FCCC produces nearly 100 chassis every working day at the 282,780-square-foot plant.

Conlan and Dean Schaper, the director of sales and marketing for the unit, believe that improvements in technology are among the main reasons why the firm has been so successful this decade. They said that school bus chassis are about 40 percent of the company’s output with the rest evenly divided between walk-in vans and RVs.

“From a technical standpoint, we have been the industry leader,” said Conlan. He cited work on improving the wheel cut – the angle that the front tire of the vehicle makes when the driver turns sharply to fit into a parking space – on its latest generation of RV chassis. He said the work by company engineers now allow an RV, in its high-end coach models, to obtain a 56-degree angle. “Our standard wheel cut of 50 degrees results in an amazing turning circle, so you can imagine what a 56-degree wheel cut can provide,” he adds.

FCCC has also been selected to provide chassis components for Fleetwood RV’s new Liberty chassis, a modular chassis specifically designed for Fleetwood’s American Tradition and American Eagle models. Conlan noted that the market for RVs has been booming the past two years and the outlook is bright due to the maturing of the large baby boomer market and low interest rates.

“Our claim to fame is having a durable chassis,” said Conlan, who noted that the current model it sells to FedEx for its growing ground-delivery operations has a lifespan of roughly 20 years. Last year, FCCC announced the launch of the MT-45 straight rail chassis, a new version of the MT-45, the most popular diesel chassis in the walk-in van industry. Schaper said the MT-45 SR was developed as a direct result of customer input. The significant difference between the MT-45 and MT-45 SR is in the new chassis straight rail chassis frame. The eight-inch steel straight-rail frame is designed to enhance the chassis’ overall strength and reliability.

In recent years, Freightliner has not just focused on growing through top-notch technology but also through customer service. After-market customer support is important to all the markets served and the company is constantly searching for ways to improve it.

The Freightliner Oasis Network, launched over the last couple of years, is made up of more than 50 select dealerships that cater to the motor home user. Each service location will have a dedicated motor home facility with trained service technicians, a motor home service area, secure parking for motor home customers and additional amenities specifically for motor home owners. It will complement a larger service network of some 350 dealers.

“We’re committed to providing a level of aftermarket support, and Oasis is a step in the right direction,” Conlan said. The Oasis project is typical of the thinking at FCCC, where officials are constantly looking at ways to take a basic American industry, and make it better.

“Our culture,” Conlan said, “is that we’re not satisfied with where we’re at.”