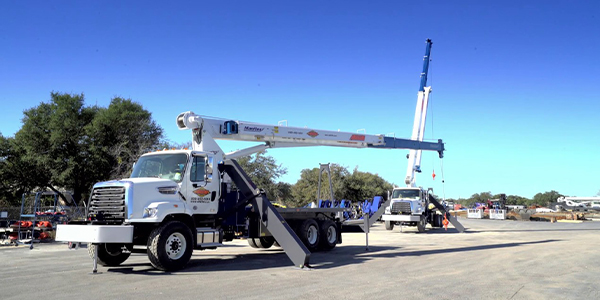 What goes up must come down, but in most cases, it’s best to control when and how it comes down. Georgetown, Texas-based Manitex provides just such control with reliable, high-capacity lifting equipment and aerial platforms mounted on a commercially available truck chassis. Manitex lifting solutions offer a range of capacities from 17 to 50 tons that can be raised as high as 166 feet for use in commercial and residential building, roads and bridge construction, oil fields, refineries, truck services, sign erection, and retail rentals. Anywhere something might need to be lifted up high; and, of course, stay there.

What makes Manitex unique is that all this heavy lifting is done off of a commercial truck chassis. “Back in the `50s, a lot of crane work was done with block and tackle and a winch,” explains Randy Robertson, director of sales and marketing. “Then about 20 years ago, what’s commonly called a `boom truck’ became a standard kind of small crane.
What differentiates us is that we’ve developed lifting tools that can be put on a normal truck chassis. The advantage is that with such a standard chassis, you have more mobility.
Our trucks can travel down a highway without permits and escorts for oversized loads as would be required for other types of cranes.”

Founded in 1986, Manitex today employs about 140, and this past July became a public company as the result of its acquisition by Veri-Tek International Corp. It sells products through a nationwide distribution network which, while located mostly throughout North America, has developed business in Mexico and South America. Robertson characterizes the relationship between Manitex and its distributors as “strong and loyal. This is a relatively small industry with a small circle of manufacturers and users. If someone gets mistreated, word gets out pretty fast. So, as good as your machines are or as cost competitive as they might be, it’s all about taking care of the customer.

Once we make the sale, it isn’t over. Customer service picks up from there. And we do a lot of aftermarket business, selling attachments and options to existing fleets. We strive to make a better machine than the next guy, but we also work harder to help customers use our better machines in ways that improve their business.”

Manitex maintains a 150,000-square-foot facility to manufacture proprietary parts of its equipment and assemble final products with outsourced components. “We started out as a fully integrated manufacturer,” Robertson points out. “But today it’s more economical to outsource.”

High Growth
Manitex has experienced exceptional growth, as evidenced by the increase in its revenues from approximately $38 million in 2003 to approximately $62 million in 2005. This has resulted in a backlog for many of its products. “This last year has been the strongest, with a lot of sustained business; and it’s not just for us, but throughout our industry. Right now what we’re dealing with is how do we meet capacity without having to pour more concrete.”

Part of the answer, Robertson explains, is to “get more efficient. Not just our manufacturing practices, but those of our suppliers as well as how we work together.” This is complicated somewhat by the rise and sometimes availability of raw materials. “We’ve seen a 40 percent increase in materials. You can’t expect to pass all that along to customers. On the other hand, we’ve had to raise prices to offset at least some of those costs. It’s a balancing act.”

Even as Manitex is strained to meet existing demand, Robertson is “cautiously optimistic” about the future. “Everyone is talking about the housing industry declining and of course that’s a big part of our business. But what we’re seeing is more regional. Things may be flattening out in some parts of the country, while others are still expanding. Here in central Texas, for example, the housing market is still booming at something like a 27 percent growth rate. Also, I think that we’re not really seeing a bottoming out as maybe a lowering of expectations. Housing has been expanding at something like 40 percent annually, and I think for 2007 that’s going to drop substantially, to maybe only 5 to 7 percent. But, it’s still growing, maybe not as much as it has been, but certainly not to the point where there isn’t any business.”

Indeed, Manitex recently announced that Cropac, a premier Manitex boom truck dealer that retails and services cranes across eastern Canada from Manitoba to the maritime provinces, placed a $6 million order for heavy lift models in the 26-to 38-ton range, to begin shipping in the second half of 2007. In another significant announcement, Manitex introduced at the Global Petroleum Show held last June in Calgary, Alberta, the largest boom truck mounted on a conventional truck chassis. The 4596T possesses a base rating of 45 tons at an eight-foot radius and can lift 96 feet, as you might surmise from the model number. (According to Robertson, “Our model numbers actually mean something: they tell you what the machine can lift and how far.”) In addition, the lower frame is configured for a fifth wheel attachment and trailer applications.ÿDual stage rear outrigger jacks provide significant penetration and improved ground clearance.ÿThis tractor mount configuration is suited for remote oil industry applications.ÿThe taxi crane version, more common with other Manitex S-series boom trucks, will be introduced later.

Pulling in Business
“We’re the only company that offers the capabilities of this product,” Robertson says.
“We developed it in response to a customer request for us to build a pull trailer for use in oil fields in northern Alberta and British Columbia. Although we’re primarily in the business of providing standardized products that can be customized with options, sometimes a customer approaches us with a list of needs and if we think there’s sufficient market opportunity, we’ll go ahead and develop it. Indeed, we’ve had a tremendous response and we’ve sold a number of these machines already, sight unseen.”

Another area of opportunity is at the lower end of the market. “There’s a lot of demand in the rental industry for smaller, low-cost machines. This is a highly competitive market that’s very cost conscious, but we feel we have the product line that can meet the needs of this segment.”

Robertson notes that the basic lifting technology hasn’t changed much, but there is a greater interest in electronic features such as radio remote controls. And while it isn’t a significant part of its business, Manitex also sells used equipment. “We’re happy to provide our customers with whatever it is that helps them do the job they need to get done.”
This is why Robertson is confident that the business trend for its lifting equipment and aerial platforms is on an upward trend. “We expect significant growth for the next few years.”

That’s a lot of heavy lifting to do. But Manitex has what it takes to stay up there. 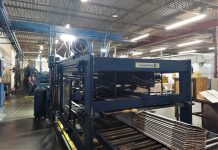 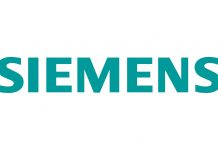