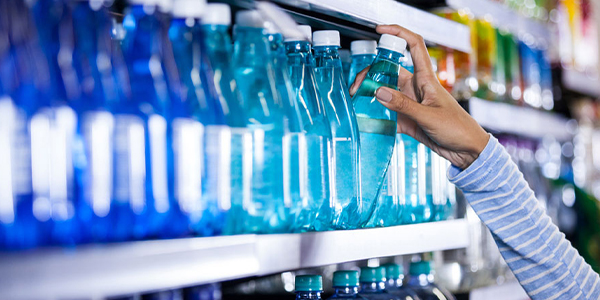 It’s bigger than beer. It’s more popular than milk. It’s hotter than coffee. Measured in volume, bottled water has emerged as the second largest commercial beverage category by volume in the United States – and it continues to get bigger.

For several consecutive years, bottled water volume growth has accelerated, and per capita consumption has enlarged significantly. The bottled water market is growing forcefully around the world, and the size of the leading markets gives some indication of the opportunities for further growth in the United States.

In 2005, total U.S. bottled water volume exceeded 7.5 billion gallons, a 10.7 percent increase from 2004’s volume level, according to the latest edition of Beverage Marketing Corporation’s “Bottled Water in the U.S.” report. That translates into 26.1 gallons per person.

U.S. residents now drink more bottled water annually than any other beverage other than carbonated soft drinks (CSDs). The gap between the two top categories is narrowing as bottled water ceaselessly advances and CSDs either barely grow, as had been happening in recent years, or decline, as was the case in 2005. Average intake of bottled water has been growing by at least one gallon annually. Per capita consumption of CSDs has dipped slightly for several consecutive years.

While CSDs still have volume and average intake levels more than twice as high as bottled water, the soft drink market has been struggling recently, in no small part because of competition from bottled water. Moreover, bottled water’s share of the U.S. beverage market is poised to grow, while CSDs’ will likely continue to lose ground.

The U.S. bottled water market reached new highs not only in volume but also in wholesale dollar sales, which surpassed $10 billion in 2005. Sales grew more quickly than they did grow in the previous two years, but did not advance at as fast a rate as volume. This reflects the impact of price promotions, especially on multi packs of single-serve bottles, which are increasingly the focus of such promotions.

Weather always affects the beverage industry, and disasters such as Hurricane Katrina contributed to demand for bottled water in 2005. Barring a repeat of such events, volume is likely to grow more slowly in 2006. Preliminary numbers suggest that volume could approach 8.3 billion gallons and that producer revenues will advance at a slightly faster rate than in 2005.

No other commercial beverage is as closely associated with the package it comes in as bottled water. Different segments are also defined by their package type. Bottled water comes in a variety of packages, ranging from small bottles made from crystal clear polyethylene terephthalate (PET) to the 5-gallon units used with water coolers. Certain segments have been growing much more than others.

Domestic non-sparkling water is the largest and strongest part of the U.S. packaged water industry, consistently outperforming the others. Domestic non-sparkling water’s 7.2 billion gallons represented 95.1percent of total volume in 2005. The segment, which comprises diverse components with very different performances, grew at a faster rate than the overall market in 2005.

The retail premium PET segment, which includes plastic packages in sizes of a few ounces up to 1.5 liters, is driving overall category enlargement. The amount of water sold in PET bottles increased from 1.4 billion gallons in 2000 to almost 4 billion gallons in 2005, boosting its share of industry volume from 29.0 to 52.8 percent. The segment is on track to increase share again in 2006.

As consumers increasingly opt for convenient PET multipacks in large format retail channels instead of larger (1 to 2.5 gallon) sizes, retail bulk volume has slowed. Its share eroded from nearly one-quarter of category volume in 2000 to less than one-fifth by 2005, largely as a result of competition from PET.

The home-and-office delivery (HOD) market has also been unable to match the forceful expansion of the PET segment. After declining in 2003 and 2004, HOD volume was essentially flat in 2005. The segment accounted for approximately 18 percent of bottled water volume in 2005.

Domestic sparkling water has revived, with solid 10.9 percent volume growth in 2005, which was the first year the segment achieved double-digit growth since 1990. Leading brands such as Aquafina now offer sparkling versions along with their still waters.

Imports had seen some renewed vitality in recent years, but declined recently. Imported water’s three-year streak of double-digit annual volume growth came to an end in 2005, when volume plummeted.

Nestl‚ Waters North America (NWNA) remains the largest bottled water company in the country, with $3.1 billion in wholesale dollar sales. The purveyor of major regional brands such as Poland Spring, Arrowhead and Zephyrhills accounted for more than 31 percent of total bottled water sales in 2005. The United States-based subsidiary of the Switzerland’s Nestl‚ derives significant revenues from its HOD business, as well as retail bulk water, while also focusing on its retail PET water business. Poland Spring remained the third largest selling brand in the United States, and several of the company’s other brands, such as Deer Park and Ozarka, achieved strong double-digit sales growth. Its Nestl‚ Pure Life brand saw sales increase by nearly 50 percent.

The leading CSD companies have the top two bottled water brands, as measured in producers’ revenues. In 2004, Pepsi Cola’s Aquafina, which has reigned as the number-one brand for several years, became the U.S. bottled water business’s first billion-dollar brand. The brand sustained strong growth in 2005, when wholesale dollar sales for the trademark neared $1.3 billion. In 2005, Coca-Cola’s retail PET brand, Dasani, joined Aquafina with sales greater than $1 billion. Both companies now offer flavored iterations of their brands. Currently, these account for a small part of their sales.

The characteristics driving bottled water’s growth are as clear as the water itself. Many consumers perceive it to be healthy, safe and, in some instances, of superior purity to alternative sources of water. It’s a versatile product, suitable for consumption at any time of day and does not need to be kept cold (like soft drinks or juice) or warm (like coffee or tea). As far as ready-to-drink commercial beverages go, it’s relatively inexpensive, and with competitive pricing it is becoming increasingly affordable for consumers. Various packaging types, ranging from bulk to single-serve, facilitate a variety of uses. Consumers’ growing interest in healthy, low-calorie products that confer benefits above and beyond refreshment also contributes to the quintessential hydrating beverage’s performance in recent years. As concern about obesity grows more widespread and intense, bottled water’s calorie-free contents appear that much more attractive to consumers.