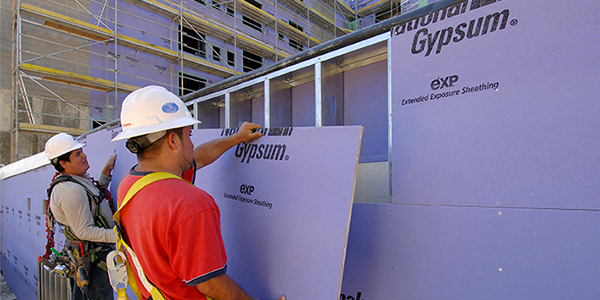 While the residential housing market shouldered the U.S. economy in recent years, National Gypsum was positioned to serve that market and grow with it. Producing enough gypsum wallboard to circle the globe 14 times annually, the company is the number two manufacturer in the United States with 20 wallboard plants strategically located near major metropolitan areas.It recently announced its intention to partner with Duke Energy Company to build its 21st wallboard plant, using byproduct gypsum. Duke will scrub emissions from four of its coal-fired plants near Charlotte, N.C. The scrubbing process will produce byproduct gypsum, which National Gypsum will use to produce wallboard in a new high-speed plant. When the plant goes into operation in late 2007, it will serve the Southeast including the growing Atlanta market, Tennessee, and Alabama.

“It’s a win-win situation,” said Nancy Spurlock, director of Corporate Communications for National Gypsum, headquartered in Charlotte, N.C. “The atmosphere will be cleaner; Duke does not have to landfill the byproduct gypsum and we have a raw material to produce our product.”

National Gypsum has a successful track record of using the gypsum produced by power plant scrubbers at its wallboard plants just outside Pittsburgh and Tampa. Each of these plants is capable of producing 800 million square feet of wallboard annually. The Shippingport, Pa., plant won the Pennsylvania Governor’s Award for Environmental Excellence in 2002, and its Apollo Beach, Fla., plant was a finalist in IndustryWeek Magazine’s Best Managed Plants Competition this year. The judges were impressed with product quality and the company’s ability to get this plant operating at top efficiency in less than three years. In fact, the plant has shipped 42,423 truckloads as well as railcars without a single error in 32 months.

In fact, the company in 2002 opened a 30,000-square-foot Technology Innovation Center down the road from the Charlotte headquarters that has already led to the introduction of drywall products that contractors are finding better and much easier to use than older products. The new site has complete analytical capability for wet and dry chemistries, as well as X-ray diffraction and scanning electron microscopy.With all of the exciting things happening at National Gypsum, you would never know that the company, for all intents and purposes, has only been around since 1998. That was when a private investment group purchased some of the assets, including the name, of an earlier version of National Gypsum Co. that had been based in Buffalo, N.Y., but filed for bankruptcy in the 1980s.

The new company very quickly established itself as the number two player in the nation’s large market for wallboard and related products. With some 45 operating locations, including paper mills and gypsum mines around the nation, the company employs some 2,800 people.

Its timing could not have been better. Beginning around the time that the new National Gypsum was created, the nation started undergoing the biggest boom in residential housing construction in its history. Spurlock said a huge source of growth has been the repair and renovation market. “That goes back to the low interest rates, and people pulling equity out of their homes for renovations,” she said.

“The largest demand for our products is in the Southeast and the Northeast,” Spurlock said. “The market can’t sustain the current pace and we do think it will fall off slightly next year – but that’s what we thought last year.” She noted that commercial construction, which is another large segment of National Gypsum’s business, has lagged during the early years of the decade but is beginning to show signs of a comeback. The same is likely true, she added, for manufactured housing, which is finally also bouncing back after a decade-long slowdown.

In addition to its geographic strength, another advantage that National Gypsum has over most of its competitors is that it’s vertically integrated. This means it not only produces wallboard and other products such as ready-mix drywall plaster and cement backing for tile floors and walls, but also mines much of the gypsum it produces and also makes its own paper. The company owns and operates the largest gypsum quarry in the world, located near Halifax, Nova Scotia, which supplies the National Gypsum plants on the East Coast.

No matter what the future of the housing market holds, the company expects to flourish because of its new product innovations, which are being released to the market at a rapid rate. One of the most popular is the new Gold Bond Brand GridMarX Wallboard, which comes complete with guide marks, and increases productivity during installation and makes inspections much faster. GridMarX allows contractors to quickly find the location of framing members behind gypsum wallboard without having to pre-draw the lines.

Spurlock said that National Gypsum does an extensive survey of its customers every three years and in the most recent survey, which took place in 2003, the company bettered its competition in every category, including customer service, quality, innovation, and over-all product value. “We believe we have raised the bar on our competition. Now, we need to stay focused to maintain our position,” Spurlock said.

With National Gypsum’s recent accomplishments, it should have no problem.