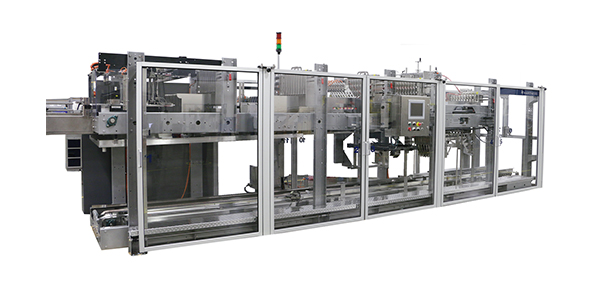 When things go awry in a bottling operation, it can resemble the famous conveyor-line scene from “I Love Lucy.” But when life imitates art on your production line, it is no laughing matter. Troublesome labelers break, run out of glue or run out of labels. When this happens and the filler continues to operate, what happens to your production?

Motivation: Mother of Innovation
Tom Hartness is a man of vision bent on making things work optimally. Just after World War II, when he was in his early 20s, Hartness and an uncle purchased a Pepsi-Cola bottling company in Greenville. He quickly recognized that the equipment available for packing the bottles of soda into crates was quite crude. So he invented “plastic fingers” designed to ease the descent of the bottles while positioning them precisely within the crates’ partitions.

Prior to this, fingers had been made of metal and were welded into the grids. They created a lot of problems, breaking regularly as they became bent or jammed. “When one broke, they had to be deriveted and welded back in place, and that was very time-consuming,” says Bogardus. “The plastic fingers were far superior because they didn’t damage the bottles and they were easy to replace because of the way they were affixed into the grid.” This invention was the first of many new engineering advances for Hartness, helping bottlers and crating businesses save time and money.

Hartness soon decided to change direction from a bottling company. He established Hartness International as an engineering, research-and-development company to manufacture superior packaging and bottling equipment. The family-owned company is now run by Tom Hartness and his two sons, Pat and Bob.

“Because of our background as a bottler, we quite naturally started by serving the needs of the beverage and bottling industry,” says Bogardus. “Over the years, we have expanded our product line to handle a huge diversity of industries, cases, container types, shapes and materials, virtually any rigid container that needs to be packed in a carton.” Today the 120,000 square-foot Hartness facility employs 330 dedicated and inventive people who each carry on the tradition by creating superior packaging solutions for their customers.

Downstream Trouble
“The heart of the line is the filler, whether you’re producing salad dressing or beer or wine, and you want to keep your filler running continuously,” says Bogardus. If the filler is down, so is productivity. The choreography in a bottling operation must be absolutely precise, as the filler depends on upstream machines to feed it bottles in a precisely timed fashion.

The filler also depends on downstream machines to move the filled product to the labeler in a precise and timely fashion. When a downstream system turns troublesome and threatens to sabotage the production line, what then?

The solution to this problem for years was the accumulation table. “In the early days when line speeds were relatively slow, people would actually pull bottles off the line behind the filler and place them on an accumulation table,” explains Bogardus. While this was going on, other workers would work frantically to fix the downstream problem.

The Mighty Dynac Dynasty
“The Hartness Dynac 7000 mass-flow series conveyor system totally eliminates all of that,” says Bogardus. “It’s an advanced design: an expanding loop conveyor.” Once a product moves onto the system, there is absolutely no pressure on it. Each of the bottles has its own space because they are metered in and moved along in a fully sequential first-in, first-out loop.

Accumulation can occur on a constant basis, so the machine is designed to read the product pressure ahead or behind a product. “This means you can have these massive and catastrophic problems with a labeler and the machine will automatically accumulate the product coming out of the filler in a completely pressureless, non-damaging fashion. No breakage, no label damage, none of the problems that currently exist in the high-pressure systems,” says Bogardus.

Dynacs are designed to run empty or full. “So you can put an empty Dynac behind a filler and a full Dynac ahead of a filler. This means that you have completely isolated the filler from any kind of problems,” explains Bogardus. “The operating concept of our Dynac is so unique and revolutionary that few customers have a frame of reference with which to define it. Even with Dynac’s dramatically superior product handling, getting a customer to make the leap of understanding is sometimes difficult.”

Compact Manufacturing
One of the advantages both Dynac systems offer is their compact size. The compactness of the Dynacs means that product lines can be made smaller, allowing greater production potential from a fixed amount of floor space. In addition, when lines are more compact, systems can be coupled closer, requiring fewer operators.

The single-file Dynac series 6000 conveyor system is designed primarily for use with non-round and sometimes rigid containers. The system is particularly effective in handling “brick” packages, gable-tops, blow-molded containers such as shampoo bottles, trigger sprayers and salad oil, margarine, yogurt and pudding cups as well as stand-up pouches.

The Dynac single-file conveyor system also operates on a sequential first-in, first-out basis. It provides each container its own space, it meters one container at a time and it totally eliminates product damage. “We can take about 220 linear feet of conveyor and put it in an area of only about 25 square feet,” says Bogardus. The conveyors resemble parking garage spirals and they are primarily four levels, although six- and nine-level machines are also available.

On the Case
Hartness’ traditional business is the manufacture of vertical-load case packing equipment. Bottles are moved in mass quantities onto a low-friction conveyor, then onto lanes. They are pushed out over shift plates that release the bottles down through the grid into a case, which then moves along the system. Bogardus says, “We make some basic as well as highly sophisticated vertical load packers that operate at high speeds and are servo-driven and precise.”

The two newest Hartness systems are the OctoPack Case Packing System and the GlobalPak. “Both systems use gripper technology and are designed to serve global needs,” says Bogardus. “They are engineered for simplicity, making them highly efficient machines with tremendous longevity. A major brewing company challenged manufacturers to produce equipment for their lines that would continuously run 20,000 hours without major service. These Hartness machines are designed to do just that. We have an OctoPack here that has been running for over a year and a half and not a single part has had to be replaced on it.”

Global Growth
Hartness anticipates enormous international growth potential in its new Dynac division. “We recognized right away that Dynac was going to introduce us to new industries throughout the world,” says Bogardus. “Dynac fills a need not filled in the past and can grow dramatically.” This is evident in Hartness’ sales, which doubled in just the last two years during which Dynac was introduced to the market. “Any manufacturer of packaging equipment or packaging solutions that does not offer a Dynac system would experience serious problems. The Dynac concept offers industries a major breakthrough in the way lines are designed and operated,” concludes Bogardus.

Not often does a single product take a manufacturer to market dominance. But when that one product does come along — as it has for Hartness International and Dynac — it truly feels like success in a bottle.