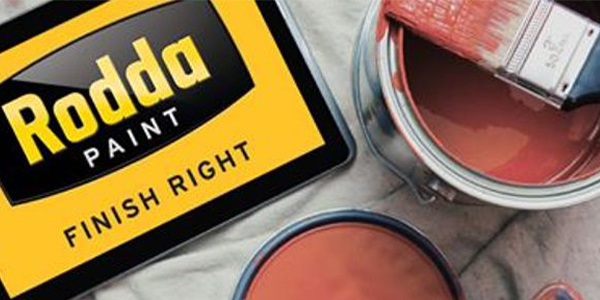 What results do you achieve when you mix two premier privately owned paint manufacturers, each with a long history of providing quality products with outstanding service to industrial and commercial accounts in their respective regions? Answer: Wider coverage without diluting two leading brand identities that looks to finish better than the competition.

Rodda Paint Company was founded in 1932 and today is the largest paint manufacturer in the Pacific Northwest. Headquartered in Portland, Ore., Rodda employs some 350 people and operates a total of 69,000 square feet of manufacturing and warehouse space, with 44 stores located throughout Oregon, Washington, Alaska, and Idaho that sell thousands of coatings under the Rodda name as well as several private label products. Revenues for 2003 were reported as $65 million.

Cloverdale Paint is younger by one year, having been founded in 1933, and is headquartered in Surrey, B.C. It sells primarily to the western and prairie provinces of Canada, as well as Washington state through 65 corporate locations. It has 650 employees. Manufacturing is conducted in Surrey; Edmonton, Alberta; Winnipeg, Manitoba; and Seattle, Wash., in the U.S. In 2003 it reported $87 million in revenue.

What both companies share is a broad base of industrial and commercial end-users with specific paint needs that must not only properly withstand the weather conditions of the Pacific Northwest and Canadian regions, but fully respond to the custom requirements and demands of the particular application – without, however, much overlapping coverage.
“Out of about 2,500 active customers between the two companies, there’s only 250 duplicate accounts,” explains Rodda’s vice president of sales, Bill Boone. “So it’s not like we’re merging with a competitor just to reduce the costs of selling against each other. It’s more a merger of equals that strengthens our capabilities as a combined company while continuing to serve customers in the region with the same level of quality service and product innovation.”

Indeed, the intention is to maintain Rodda and Cloverdale as distinct brands. “For the most part, Cloverdale products are sold in Canada and Rodda paints in the northwest U.S.,” Boone notes, “Though there will be instances where a Rodda store may carry some Cloverdale lines and vice versa.” Each operation will continue to be operated by its existing personnel and respective management teams.

The merger of the two companies took place in January 2005 and Boone points out that while details of the new combined venture are still being worked out, the initial intention is to focus on serving and expanding the customer base within the two companies’ combined regional coverage areas. “We do compete locally with the national brands such as Sherwin-Williams and Benjamin Moore,” Boone says. “While it’s currently not our intention to become a national brand ourselves, the new relationship with Cloverdale does provide opportunity to expand into new markets. We could, for example, follow Cloverdale’s markets as they extend across Canada and open Rodda stores in contiguous regions below the border across the U.S.” He adds that while Rodda traditionally hasn’t sold much to retail outlets, the combined company might consider penetrating opportunities for “do-it-yourself customers” more fully in the future.

Largest selection by far
For now, though, the companies are concentrating on “business as usual,” with the “usual” being defined as superior products backed by outstanding customer service and capabilities. “We have five primary industrial market segments along with our core architectural business,” Boone explains. “Heavy duty industrial, light industrial, wood coatings, floor coatings and water-repellant coatings. Because we have a loyal customer base, diversity of products further helps us retain and develop that base. In fact, we have the largest selection of product offerings in the Northwest. Now, in combination with Cloverdale, that selection is even bigger.”

Boone notes that as a regional manufacturer, Rodda and Cloverdale specialize in high performance products formulated for the extreme climatic conditions of the northwestern part of the country. “We offer paints designed to withstand harsh chemical, physical abuse, heat cold and moisture, basically any weather condition that can easily degrade average paints and stains,” Boone says. “You find our industrial coatings in food processing plants, pulp and paper mills, hydroelectric dams, manufacturing plants, sports stadiums and high tech facilities throughout the Pacific Northwest. “He adds that while Rodda paints are price competitive, industrial and commercial customers are also looking for the high product performance and excellent service that is Rodda’s hallmark. One way in which Rodda stands out from the national brands is its willingness to provide custom formulations. It currently offers over 1,000 of these products developed for small, special applications. “We have a paint laboratory with a technical service staff that welcomes any opportunity to meet a challenging new application,” Boone boasts. “I guess you could say they really look forward to ‘mixing it up’ in ways our national competition isn’t interested in. We market to a niche, and that requires us to be more responsive to the needs of that niche. It’s the kind of thing our customers expect from us, whether it’s high gloss water-borne enamels for use on railroad cars, specialized marine coatings, or ultra fast-drying traffic line and striping paints, Rodda can help develop just about any finish for any need. This commitment is reflected in our small batch capability where quick turnaround times are required for smaller projects.”

Green Seal of Approval
Also, both Rodda and Cloverdale are committed to environmentally friendly coatings, which in most cases exceed regulatory requirements. One example is Rodda’s Green Seal(r) certified Horizon paint line. This is the first and only exterior paint line to be Green Seal(r) certified, and both the interior and exterior Horizon coatings qualify for LEED(tm) (Leadership in Energy and Environmental Design) points established by the Green Building Rating System of the U.S. Green Building Council. Both interior and exterior versions have low Volatile Organic Compounds (VOCs) and no harmful chemical components. At the same time, they meet all performance standards for scrubbability, hiding power and washability, and contain agents that inhibit the growth of mold and mildew.

Perhaps best of all, as Boone points out, is that, “Horizon paints have almost no odor. They’re perfect for situations where painting is going on where nearby other people still have to work. It’s the future of paint.”

As for the future of Rodda and the relationship with Cloverdale, Boone thinks that the company is well positioned to roll up increased sales. “Cloverdale has four manufacturing plants. Right now they’re close to being maxed out in terms of capacity. In contrast, one of our Rodda plants is producing at a third of its ability. We built our capacity looking ahead, and we have that added manufacturing ability already ‘in-the-can’ so to speak will help further broaden our combined coverage to meet and exceed customer expectations.”