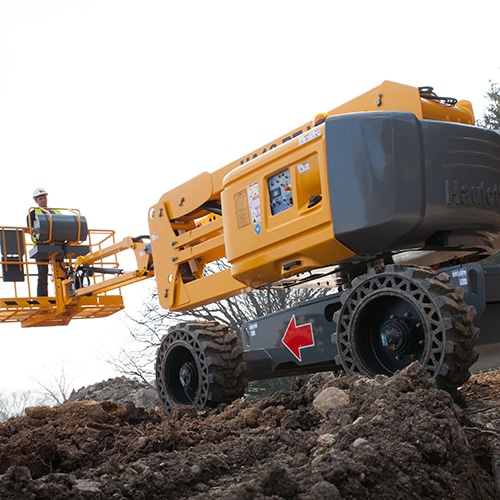 Buddy Dieter, Vice President of AWP Sales and Service for the company’s North American operations, sits down to talk about how Haulotte has slowly but steadily fostered success across the United States, and why an unmatched commitment to both product innovation and safety has their reputation soaring to new heights. Steve Engelhardt reports.

1985 was an important year for Haulotte, whose original roots stretch all the way back to 1924, when Arthur Haulotte first founded the company. It was at this time when Pierre Saubot took control of the board and made the instrumental decision to invest fully into the business of designing and manufacturing aerial work platforms. “There was a void in the European market at the time, and he saw an opportunity to bring quality and safety to an industry where such factors today are paramount,” Dieter says, adding, “It began with the purchasing of the remaining assets from a local. France-based manufacturer called Condor, and has evolved to the point where, thirty years later, Haulotte is the third largest producer of aerial work platforms and related equipment in the world.”

North American Presence
Almost exactly in the middle of the 30 year period (2001) was when Haulotte made the initial decision to open up a distribution facility in Frederick, Md., as a way of feeling out the North American market and their potential place in it. “We ran distribution for about seven years and saw a lot of early success and room to grow, so much so in fact that we decided to take the leap in 2008 and open up manufacturing in the country as well,” he says.

The move, which represented a significant chapter in Haulotte’s modern identity, was done through the company’s acquisition of Biljax, the largest manufacturer of scaffolding in the U.S. at the time. “In acquiring Biljax, we were able to have an official U.S. manufacturing presence in Archibald, Ohio, but beyond that it allowed us to greatly expand our overall product offering, including scaffolding, trailer-mounted boom lifts, and event staging and seating that enabled us to ultimately bring much more dynamic solutions to the market.”

And when you take into account the company’s dedication to quality and innovation in each of their products, Haulotte’s global success quickly becomes apparent. “When it comes to towables, we are the industry leader in terms of the features, capabilities, and range of motion offered,” he says, adding, “We manufacture four different models of them right here at our site in Archibald, and they are considered as the number one option in the market today with respect to overall performance.”

Performance is, after all, what drives Haulotte’s success and Dieter says you can find it in each and every one of the company’s products. “We have a full range of battery powered scissors, from 19-foot platform height to a 39-foot platform height. Our 3947 and 3347 models are the narrowest machines in that platform range. We offer a full line of rough terrain scissors from 26 to 53 feet that also have hydraulic outriggers. We also produce electrical, battery powered articulating booms, from 32 to 43 feet. The diesel powered articulating booms range from 46 to 130 feet, while the telescopic booms range from 44 to 135 feet.”

Annual Innovation
Behind Haulotte’s extremely diversified and performance-driven line of aerial lift platforms and equipment is their commitment to displaying innovation on an annual basis. A majority of the company’s formal research and development efforts are conducted at their headquarters in France, but the progress and solutions achieved are done so to benefit their global platform. “At Haulotte, it’s our goal to introduce at least four new upgrades to our existing products each and every year, not only because of the competition our markets provide, but because we believe that constant improvement is our duty to the end user.”

This year, the company unveiled a number of new upgrades to their existing models at INTERMAT 2015, a world-class international exhibition held in Paris every year for the showcasing of civil engineering and construction equipment and techniques. “We unveiled major improvements related to our products, including upgrades to our range of STAR vertical masts and HA-series of articulated booms, as well as new technologies like our ACTIV Shield© Bar, which was created to respond to demands from the industry to protect operators from the risk of overhead trapping/crushing, further highlighting Haulotte’s uncompromising stance towards worker safety.”

Specifically regarding their big booms, Haulotte unveiled a new version at the show called HT43 RTJ PRO that Dieter says now provides a superior equipment level unmatched by the competition. “With our improved big booms, users now have a new generation of modular baskets that provide a protective cover over the upper control box and a tool tray with ultra-high resistance plastic, a secondary guarding device in the form of our ACTIV Shield© Bar, compatibility with advanced diagnostic features, and, finally, an assortment of new performance-driven aesthetics and parts like swinging doors, glazier packs, and a 3.5 kW hydraulic generator.” They also revealed a new HA20 RTJ model that has a sleeker, longer design than Haulotte’s HA16 RTJ, and provides an even more ideal combination of weight dimensions and power performance, increasing the overall comfort and ease of use.

“When we innovate and develop new solutions, we are doing so with the end goal of creating a machine or piece of equipment that is ultimately ‘made for your business,” Dieter says, while adding that the company has new products upgrades already developed and ready to be introduced each year through 2018.

Looking Ahead
Never satisfied with the status quo, Haulotte is one of the top aerial equipment providers in the world for a reason. However, Dieter says that despite their global renown, they still are working hard to penetrate the North American market even more, gaining a bigger share amidst competitors like JLG and Genie.

“It’s our goal to gain a significant market share here in North America and while we certainly have the end product and technology to do so, we just need to get our name out there a little more and show some of these business—who may currently be committed elsewhere—just what exactly Haulotte products can accomplish,” he says, adding, “However, I look around and I see us already in full snowball mode, gaining more market traction each year and I’m excited as our name continues to grow here.”

It appears as though the writing is on the wall for Haulotte to eventually become one of North America’s leaders in aerial lift platforms and equipment, it’s just a matter of when it will happen. But with consistent innovation, a far-stretching reputation for quality, and an everlasting commitment to their customers, it appears as though it will be sooner rather than later, and that’s something end-users and industry in general can benefit greatly from.