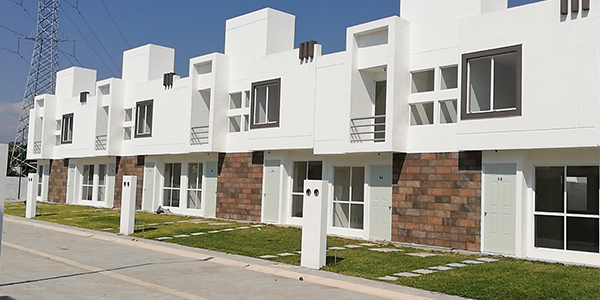 With a deficit of six million houses, an average yearly marriage rate of 700,00 new weddings and 200,000 to 300,000 units built a year, Mexico was falling behind in bringing in the necessary remediation to its lack of housing. During the 2000 presidential campaign that brought President Vicente Fox to office, candidates were competing in promises about the number of units they would build.

“President Fox’s new policies allowed companies such as Tecno Urbe to develop in a more dynamic market because of credit availability, which motivates people to buy and choose their new homes and neighborhoods from an ample pool of options,” said Salvador Aguilera, engineer, president and owner of Tecno Urbe Construcciones S.A. de C.V., a company he started in 1978.

A former worksite supervisor for the INFONAVIT, Aguilera was deeply in tune with the requirements and conditions of the low-income housing developments when he left the federal agency to open his own business. A graduate from the Instituto Politécnico Nacional in Mexicali, state of Baja California, Aguilera founded in Morelos a local construction company that has evolved into a regional developer producing an average of 400 units a year. Expansion plans for Tecno Urbe include developments in localities such as Acapulco, Los Cabos, Punta Peñasco and Cancún.

“We are pretty consolidated in our home state of Morelos, and we are now looking at other options in the surrounding states. We have enough land reserved in Morelos to carry us through a couple of years in case prices skyrocket. We are now planning new developments in areas with high tourists’ affluence,” said Aguilera.

OVERCOMING DIFFICULTIES
Confronted by President Fox was a multi-layered problem in the way housing was dealt with by federal agencies. On one hand, the federal government used to build and administer lending and purchasing of housing through its different organisms, mainly INFONAVIT. However, the system was slow and bureaucratic, and only allowed fully employed contributors.

On the other hand, the lending system, which basically applied long-term savings from salary contributions to the purchase of a new home, was plagued with corruption at many levels, and the funds were often not used for legal purposes. Fox’s administration cleaned house and transformed the system to an open, free market participation that motivates construction companies, developers and builders to compete in the massive production of low-income housing. New sources of funding were created, and new entities were given the opportunity to participate in this market, offering loans from private sources such as banks and SOFOLES, or non-bank institutions licensed to lend money for specific purposes such as housing, small business lending or automobile financing. Moreover, the new regulations allow self-employed and under-employed workers to contribute to the system in order to achieve the dream of a new home.

As for Tecno Urbe’s role, Aguilera believes his company’s competitive advantages are based not only on the technology the company handles, which allows cost reduction, but also in its strict administration and its excellent sales team. “During the crisis of 1995, I realized I was in need of additional business background. As a professional engineer, I had expertise in construction, project and worksite problems but business and personnel management required additional skills,” Aguilera explained. He immediately enrolled in an MBA program at the Instituto Tecnológico de Monterrey, and later on, he pursued a PADE, an executive business management program at the Universidad Panamericana (UPAM) in Mexico City.

This professional knowledge gave Aguilera an edge in the way he pursued his business. He commenced putting together a team that would make instrumental decisions related to market studies, processes, sales, prospective sites, financing and technology.

The company’s structure was divided in several departments. The technical construction department consisted of an engineers and architects team with ample experience in the field of low-income housing. Another principal department was financing management, dealing with paperwork from government and private banks that offered loan opportunities to potential customers. A third crucial department was sales. “Three or four year ago, sales did not require a lot of effort in the construction business. Customers would simply come to us. However, since the competition has increased, marketing efforts have become a fundamental tool in pursuing our business,” said Aguilera. Tecno Urbe has a team of 15 salespersons that perform their duties at the complexes or look for clients through associations, unions, and the general public. Potential buyers also come through the company’s Web site, which Aguilera believes is the way business will be done in the future.

Competition has increased to the point at which INFONAVIT statistics show an average of 1,000 houses presented to new homeowners daily. The number of homes bought through this and other agencies has reached record highs in Mexico’s history. Competition also motivates companies to offer added values to its developments, such as basic services and social infrastructure that create neighborhoods with higher economic values.

DEVELOPMENT CHARACTERISTICS
General characteristics of Tecno Urbe developments take into consideration the low-income housing surface requirement of 40- to 70-square-meter lots. For instance, on a lot of 4.50 by 14 meters or 63 square meters, Tecno Urbe develops a duplex home of 65 square meters with three bedrooms, one- and a-half bathrooms with the possibility of expansion. Such is the case with Los Manantiales, a development that the company recently ended close to the Sol parkway, near Acapulco. In addition to individual parking space and guard booth, the complex also offers a swimming pool for common use.

Units at Los Manantiales command prices of M$400,000 – these are easier to sell, explained Aguilera. Units such as the ones in La Arboleda, a luxury apartment complex in Cuernavaca, Morelos, with a surface of 103 square meters that offers integral kitchens, three bedrooms, two full bathrooms and two-car garages, are sold at M$800,000. “Low-income housing represents 70 percent of our production, while we build another 20 percent for medium-income families and 10 percent at a residential level,” said Aguilera. The development consists of only 72 units with two swimming pools and additional services.

Tecno Urbe uses pre-manufactured concrete elements in combination with traditional construction systems. The reinforced concrete technology is of Italian origin, but Aguilera’s team has adapted it to the use, conditions and materials of the region. The external design, including materials and colors, are determined by the company, and alterations are not allowed. “We try to keep the stability of the neighborhood’s economic value with maintenance consistency,” Aguilera explained.

KEEP IT SIMPLE
Aguilera’s philosophy regarding the way business is conducted has kept the company in a steady, solid 25 percent growth in the last several years. The company’s credibility is related to the quality of its construction and the excellent sales and service support. Even INFONAVIT recommends people to Tecno Urbe as a reliable company in pricing, quality and delivery time.

“Maybe companies such as ARA or GEO build more units nationwide, but they have financial resources we don’t have because our growth has been organic as the result of profit reinvestment. Our company’s expansion is uncomplicated and healthy,” Aguilera concluded.