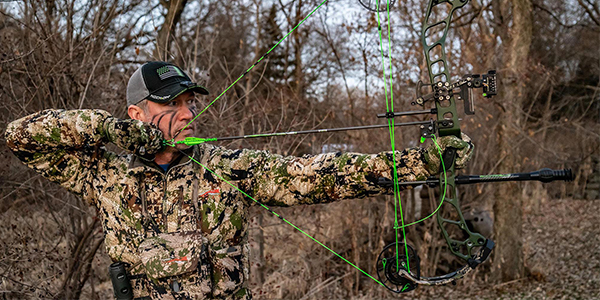 Pete Shepley has always defied the proclaimers. As a youth in 1950s rural Illinois, he ignored the advice of counselors who encouraged him to pursue a career in farming. Instead, true to his desire to aim high, Shepley earned a bachelor of science degree in mechanical engineering, became a successful inventor of archery accessories and is now a self-made entrepreneur and owner of the world’s largest manufacturer of archery equipment. So much for free advice.

While managing government missile programs for Magnavox, Shepley substituted lunch breaks for tinkering in its Tinker Shop, a virtual playground for engineers to work on their pet projects. Here, he invented archery accessories for his own use. Shepley quickly realized there was a lucrative market awaiting his innovations; thus Precision Shooting Equipment (PSE) was born in 1970 in an old hog barn behind the Shepley home.

Promoting the Sport of Archery

The success of the Tucson, Ariz., company is probably the result of the revolutionary marketing strategies of Shepley, PSE’s president, who has earned his reputation as an innovator. What other company would operate as many as three 18-wheelers – the PSE Archery Express fleet – crisscrossing the country to more than 175 appearances annually at consumer and trade shows? The trucks also promote archery tournaments and visit PSE dealers as they stimulate interest in PSE products. More than 1 million people each year get a hands-on experience aboard these trucks, virtual PSE factory showrooms. “Pete believes this is good for the sport of archery as well as for the industry and PSE,” says John Groff, executive vice president of the company that employs about 400 people in a facility covering 300,000 square feet.

The man on the street does not normally consider archery as a tournament sport outside of the Olympics. However, on any given weekend, there are up to 20 archery tournaments held around the country. Groups such as the National Field Archers Association and the International Bowhunters Organization keep this thriving sport active and flourishing.

“We primarily manufacture bows. They drive the business,” explains Groff. The archery market is segmented, but there is a lot of cross-over. Before 1970, all bows were either longbows or recurves. That year saw the emergence of the compound bow, a more powerful design utilizing cams or eccentrics and introducing the concept of let-off. Let-off allows the archer to hold the bow on aim at a considerable reduction of the peak weight or draw weight. Today, most bows are compounds.

PSE offers compound bows, recurves and longbows to the youth market. Summer camps, YMCA and Boys and Girls Clubs are often the first experience people have with archery. It’s important that these bows are not perceived as toys, or young archers will lose interest.

PSE has pioneered the practice of machining extruded aluminum to produce the risers or handles for bows. It’s lighter, stronger and allows more design possibilities. The company has brought this technology into the traditional recurve arena. While these bows are used by many for hunting, the majority are for tournament competition. PSE is making steady inroads into the European market, where hunting is relatively rare.

The bulk of PSE’s output is earmarked for hunters in the United States. It is estimated that there are more whitetail deer in America today than when Columbus landed, and more deer hunters than ever. The International Bowhunters Organization has sparked interest in archery year-round by promoting three-dimensional tournaments where competition simulates a hunting environment. “Archers shoot at full-sized, three-dimensional, animal-shaped targets from unmarked distances,” explains Groff. “Hunters have to shoot uphill, downhill and contend with prevailing weather conditions, making it a bit more challenging.”

PSE offers 3,200 SKUs and has about 50 bow styles from which to choose. Most bows are offered in a range of draw lengths from 27 inches to 31 inches and a peak weight from 50 to 80 pounds. “Each bow has to be built and sized for the archer,” says Groff. “It’s not like a tennis racket or a gun where one size fits all.”

PSE’s Mach-10 is the company’s high-end bow, a culmination of the best features PSE has developed over the past 30 years. “It has a fully machined aluminum riser with compression-molded fiberglass limbs, precision-toleranced pivoting machined pockets and fully machined Teflon™-coated aluminum cam wheels,” says Groff. “Machining is the process of shaping metal parts on a high-speed, computer-controlled multibit router.”

“We devised a patented process for the Mach-10s Magnaglass™ limbs,” says Groff. “We believe they are the best limbs in the industry and our warranty statistics confirm it.” As the bow is pulled back, the limbs are compressed like a tightened spring, and as the bow is released, the string is pulled back into position propelling the arrow forward. Other limbs on the market are typically pultruded fiberglass, cut and ground to final shape. “Ours are compression molded both for strength and to avoid exposing any fiberglass ends. We are confident advertising them as the most reliable in the industry.”

Another patented feature, the Mach-10’s machined pivoting pockets, provides a wide range of adjustability as the limb is secured firmly to the bow. The pocket is the interface that holds the limb to the riser. Its main feature is that it reduces stress on the limb. That’s significant over the life of the bow. The fully machined aluminum riser featured on the Mach-10 is far stronger than its predecessors, which were made of castings or forgings. “By utilizing 6061 T6 aluminum, we can make the bow more skeletal and decorative without sacrificing strength,” says Groff. “It’s a lot more visually appealing.”

“Experienced hunters who appreciate a well-designed and meticulously crafted bow will purchase the Mach-10,” says Groff. “Of course, we offer a full range of bows, and we’re proud that you’ll find PSE quality in every bow we make. But the Mach-10 is special. The Mach series is Pete’s signature line. Reminiscent of the old Tinker’s Shop, Pete designs them and refines the details. Archers appreciate the attention he brings to this bow.”

PSE annually publishes about 250,000 copies of its sales catalog, which is sent to both consumers and dealers. The company sells only to dealers through 18 regional sales managers. “Ours is the only factory-direct sales force in the industry,” says Groff. “These managers are exclusive to PSE. They aren’t promoting other products as well. PSE’s Dealer School was established to give authorized dealers a week-long training session on all aspects of bow technology and retail marketing. They can also earn a Tech-Certification allowing them to service the bow or make warranty repairs, earn an Instructor Certificate or attend a session of PSE’s Shooter School.”

The vertically integrated company manufactures everything it possibly can on site. “We purchase raw materials rather than components. We machine the aluminum, we mold the plastic parts, we compression-mold the fiberglass parts. We also do our own painting and anodizing. We do our own marketing, including design and photography for catalogs and packaging. PSE produces a full line of hunting and instructional videos, with all the scripting, shooting and editing done in-house. We can respond to a changing marketplace very quickly,” says Groff.

Annually, Americans purchase approximately 400,000 bows from 30 different manufacturers. PSE is responsible for about 35 percent of the market. An impressive record of continual growth has been spurred by innovative products with price points that make the sport available to everybody.

The company’s engineering department constantly develops and tests new technologies. “They are working to take us to that next level,” says Groff. What would that be? “Faster, stronger, lighter, more aesthetically pleasing, more accurate and more user-friendly are the directions we are pursuing.”As a leader in the archery industry, PSE feels its role will be to continue to help grow the sport and to get more youth involved. “Pete is an avid archer and bowhunter – he isn’t just some corporate guy owning a diversified company,” concludes Groff. “We are a company in control of our manufacturing processes. We do everything internally and we don’t leave anything to chance by subcontracting. We are not just an assemble-to-order factory. As Pete says, “We want it done right so we do it ourselves.”