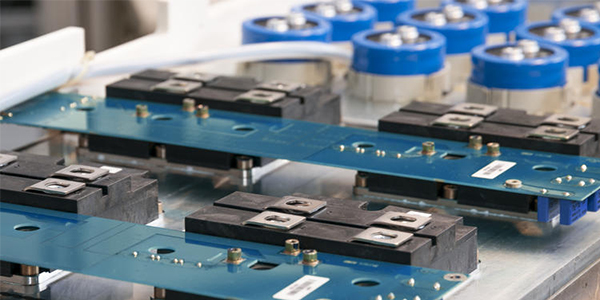 Tugboats may invoke romantic images of seafaring vessels but in the 21st century their practice of guiding ships into port has nearly become a thing of lore.

That’s due in part to technology developed by ALSTOM Power Conversion Inc. (APCI) a Pittsburgh-based leading producer of marine, offshore and industrial power solutions. The company’s dynamic positioning system (DPS) has been widely employed in areas such as the Gulf of Mexico, where the tedious job of cable laying demands that ships maintain their exact position for long periods of time under sometimes adverse weather conditions. Here, the role of the DPS is critical: It automatically keeps ships, workboats, or offshore drilling structures at a fixed position with the thrust of a propeller or thruster and without using such fixing devices as anchors.

In addition, where tugboats traditionally directed ships into a port or narrow channel, the DPS now allows these vessels to plot their own direction, by reading information off of satellites to control the ship’s propulsion.

But don’t write off tugboats completely; historical societies across the country have been quick to preserve their memory, with various areas valuing their importance as vessels of historic and educational importance. Their utilitarian use, however, has greatly diminished in a world that is increasingly more complicated, particularly in the area of offshore marine activities, which requires more finesse in technological innovation. Since the early 1970s ALSTOM has been at the forefront of dynamic positioning technology, with over 300 systems installed.

In particular, the company’s A-Series range fulfills the exacting requirements for vessel operations, from basic joystick systems through to full triple voting/Class III systems. A modular and flexible approach is the basis of the A-Series, offering either full vessel management or partial facilities. The distributed control system is based around a redundant network, with outstations located close to the plant and the HMI in the central control room and engine rooms. Standard control modes have been developed over the years to cover most scenarios, including cable ships, dive vessels, PSVs, AHTS, drilling vessels, shuttle tankers and FPSOs, to name a few.

ALSTOM’s capability as a single system vendor (SSV) for power and propulsion, automation and DP systems, goes hand in hand with its extensive system integration experience. System commissioning, after sales service/maintenance support and spare parts support is provided from regional sites in Pittsburgh, Pa.; Miami, Fla.; Houma, La.;, Houston, Texas and Seattle, Wash. APCI’s Technical Training Center in Houston is one of only three in the U.S. that is Nautical Institute approved for the training and certification of DPS operators.

As APCI guides the industry away from the days of the tugboat the company is also leading in other areas as well. Says President & CEO, Shoun T. Kerbaugh: “We are a systems solution provider for advanced automation concepts and a complete systems integrator. Our capabilities have evolved from companies within ALSOM that have specific technical expertise and many decades of experience.”

Power at sea
APCI was originally established in Pittsburgh to support the steel industry and from that small beginning has grown into becoming a premier supplier to the marine and offshore industries. “The marine and offshore industry has grown substantially,” notes Kerbaugh, adding the company has won numerous contracts with the U.S. Navy to supply electric propulsion and auxiliary propulsion systems for a wide variety of vessels.

One contract entails work on the U.S. Navy’s DD(X) Program, the centerpiece of a family of ships that will operate within the purview of the Surface Combatant Navy to deliver a vast range of warfighting capabilites that will maximize and revolutionize the combat capability of the fleet. For this ship ALSTOM has developed an Advanced Induction Motor with higher power density that meets the Navy’s requirements.. With manufacturing of the propulsion motors taking place in the U.S., and the high technology drives in Pittsburgh, the project itself is now in the first phase of equipment and component testing. “We’ve been working for several years on continuously improving the technology,” Kerbaugh says. “The technology is now being tested at the Navy’s Land Based Test Site in Philadelphia and is being optimized for DD(X).”

The expertise in the marine arena goes back decades; APCI’s parent in Europe has been actively involved in shipbuilding and is responsible for the creation of luxury liners such as the Queen Mary 2 as well as ships for all the major cruise lines.

“Our role is on the electric propulsion side,” adds Joe McGrath, Director of Legal and Commercial Operations, as opposed to gas turbines, which inherently add to fuel consumption costs. Diesel electric propulsion enables new technologies such as podded electrical propulsion and dynamic positioning systems to be implemented on board merchant ships, strengthening the “electric ship” concept. And there have been many recent advances, including the development of a “silent” propulsion system developed for cruise liners, oceanographic research, and other vessels, where low underwater noise is needed.

One of the pioneer projects under APCI’s belt is the U.S. Coast Guard Healy, the largest ship in the Coast Guard fleet at 435 feet long. Based in Seattle, Healy is an icebreaker and research vessel designed to conduct a wide range of research activities, providing more than 4,200 square feet of scientific laboratory space, numerous electronic sensor systems, oceanographic winches, and accommodations for up to 50 scientists. For this unique vessel ALSTOM provided an integrated power plant arranged in a “Centralized Power Station” configuration, which supplies both the propulsion system and the ship’s service load from a common 6600V AC switchboard. APCI now helps maintain the Healy’s power, propulsion and automation systems through a sophisticated remote diagnostics system and a condition based maintenance program.

Enabling the company’s involvement in such important projects is APCI’s ability to perform a complete factory acceptance test on drives and systems before shipping these to the site. “We’re able to execute complete projects from a strong U.S. base in Pittsburgh,” McGrath says. “You don’t find that a lot in this industry.”

With sales in the $100 million range, APCI offers a portfolio of services and technologies that make it an established player in the area of marine electrical power and propulsion.

Its product lineup includes a wide range of variable speed drives, which comprise PWM, cycloconverter or load commutated inverters, over a broad power range. This ensures that during the design phase, the most appropriate solution can be chosen for each particular application.

Utilizing a central power plant concept, when combined with variable speed drives, has distinct advantages: the number and size of the prime movers can be optimized; flexibility of equipment layout can provide better use of available space; prime movers can be operated at optimum loads, reducing carbon build up and maintenance costs; reduced fuel consumption; reduction in noise and vibration compared with conventional diesel mechanical arrangements and reduced NOx emissions, benefiting the environment.

Besides the propulsion and thruster systems, APCI provides drives suitable for other areas, such as fans, cargo pumps, compressors and AC or DC drilling systems.

‘Steeling’ the show
APCI is also extensively involved in the control and automation of metals production and processing for steel, aluminum, copper and brass manufacturers. The business serves all process sectors in the metals industry, including steelmaking, section mills, mini mills, hot strip and plate mills, cold-rolling mills and processing lines. Since 1970, more than 2,000 major references have been acquired worldwide by ALSTOM.

Lately the company has been involved in a number of revamping and upgrading projects, including the upgrade of drives and automation systems for better gauge control and improved quality control. “A lot of mills we work on are from the 1960s,” Kerbaugh says. “Making these enhancements allows production to increase on tons per hour by as much as 50 percent.” Recently completed projects include a U.S. Steel tandem cold mill in Serbia and work on several cold rolling mills for U.S.S. – Kosice in Slovakia, as well as system upgrades and modernizations at ISG (Mittal Steel), Rouge Steel (Severstal NA), Dofasco, WCI Steel, Ispat Inland, Duferco and multiple domestic U.S. Steel facilities.

With all of these projects under its belt, it’s no wonder APCI can lay claim to being one of the foremost in its industry; by land or by sea, the company has become one of the most diverse total solutions providers in the world.