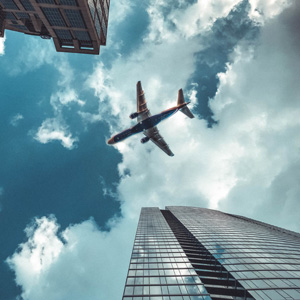 It may seem incredible these days, but early aircraft were made of wood. It did not, however, take long for the aerospace industry to work out that metal was a better choice and aluminium quickly became the metal of choice for many reasons. In particular, it’s very light and does not rust.

Sometime later, the aerospace industry realised that it was possible to create composite materials, which combined the best properties of its components (meaning best from the perspective of aviation) to produce a new material which was (for their purposes) superior to anything its constituent parts could offer.

Here are the five qualities the aerospace industry prizes in composite materials.

Lightness on its own is not enough for the aerospace industry. If it were, aircraft would be made of paper. Materials used in aviation must balance lightness with strength. That said, when two materials have the same degree of strength, then, in principle, the lighter is always to be preferred (assuming it is fit for purpose in other ways and economically viable) as it reduces the fuel requirements for flight, which brings (significant) cost savings as well as being good for the environment.

Even though aircrafts may look like they are gliding, seamlessly, through the air, in reality they are creating massive amounts of friction and the faster they go, the more friction they will create. The more friction they create, the more heat is generated and hence the more important it becomes that the materials used in aviation are capable of resisting it.

Lightweight materials with extreme heat resistance have been around since at least the 1970s. They made Concorde possible, but Concorde was anything but a typical passenger aircraft. In fact, it was essentially a scientific experiment, financially backed by the UK and French governments.

It’s also worth remembering that Concorde was notorious for the fact that its length increased over the course of its flights as a direct result of the heat it generated. If supersonic air travel is to become a practical reality (thus massively cutting down long-distance flight times), then aircraft need to be able to maintain their shape from one airport to another and so it is imperative that the aerospace industry has access to ultra-heat-resistant materials and at current time glass- and carbon-fibre based composites look like the most promising options.

Then, finally, it reaches London and descends to a place where surface temperatures are around 5°C. These extreme and repeated temperature changes can have a significant impact on certain metals, causing them to expand and contract. This can have very serious safety implications, which is why materials which resist thermal change are so highly prized by the aviation industry.

Corrosion is the name given to the process by which a refined metal becomes converted into a more stable form of metal, typically a hydroxide, oxide, or sulfide.

In daily life, probably the most visible form of corrosion is rust (Iron Oxide), which is what happens when unprotected iron comes into contact with water and oxygen.

Aluminium is very resistant to rust, which is why it is valued in many industries which have a need for weather-proof material. Unfortunately, aluminium has poor resistance to galvanic corrosion, which is essentially a form of corrosion which happens when metals are brought into electrical contact with one another.

This is the type of corrosion typically seen on car batteries and it is a major issue for the aerospace industry since modern aircraft require masses of electronics in order to function. Prior to the introduction of composite materials, galvanic corrosion was the major cause of structural issues in aircraft and hence was a very expensive problem for the aerospace industry.

In addition to generating significant quantities of heat, the speed at which an airplane travels also magnifies the effect of any form of impact. This means that tiny hailstones, which would be a minor inconvenience to someone on the ground, can actually be a major challenge for the aviation industry.

To make matters worse, the height at which an aircraft cruises makes them more susceptible to being hit by hail as hail is, essentially, ice and therefore can only exist where temperatures are at or below freezing, such as high up in the atmosphere.

Composites of various sorts can add massive strength to aircraft without significantly increasing weight and have therefore delivered huge safety benefits even for standard, passenger aircraft and especially for specialist airplanes such as military aircraft.