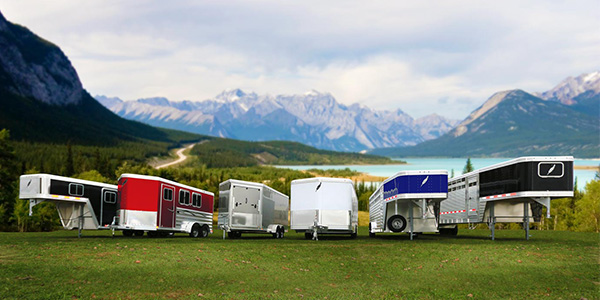 Featherlite, Inc., a premier name in the trailer and coach business, is taking its dramatic growth in sales, and the attendant challenges, in stride. The Cresco, Iowa-based company is introducing new models (the model count is now in the hundreds), and is implementing a strategic plan to carry it into the new century.And there’s an exciting twist to the company’s expansive product line. It’s called mobile marketing.

“We’re very excited about mobile marketing trailers,” says Featherlite Vice President Eric Clement. “They’re now part of many companies’ communications mix. They’re the new buzzword in several industries. These units give consumers a chance to see and feel a new product.” And they’re all part of the track record that Featherlite has established.

Besides its home base in Cresco, the 1,600-employee company has operations in Mocksville, N.C., Pryor, Okla., and Sanford, Fla. Featherlite’s near- and long-term growth strategy is reinforced by several priorities, as outlined by the company’s president and chief executive officer, Conrad Clement:

The Featherlite brand name has been around since 1973, when the company introduced the innovative all-aluminum trailer. The Featherlite brand represents a high standard of innovation and craftsmanship. Featherlite-made trailers and transporters carry everything from horses and other livestock to vehicles from snowmobiles to race cars.

Indeed, if you’re a racing fan, you’ve undoubtedly seen the Featherlite brand name at the track. The company’s marketing partners include NASCAR, Championship Auto Racing Teams (CART), the National Hot Rod Association (NHRA) and others. It has a line of transporters for hauling high-powered racing vehicles to race day. In fact, Featherlite is the “official trailer” of NASCAR, CART, the Indy Race League, the Automobile Racing Club of America and others. Featherlite even has its own V.I.P. Club, which offers luxury coach owners a variety of special events plus trip packages to key auto racing and other leisure events.

The luxury coach field is one of the company’s newer endeavors. The VantarŽ and Vogue (Mitchell Motor Coach Sales) divisions were acquired in 1996 and 1998, and combined in 1999 to form the Featherlite Luxury Coach Division.

“We recently launched the Vogue 6000LX luxury motor coach,” says John Hall, the company’s director of communications. “It incorporates features found in Europe’s luxury vehicles and yachts. The entire coach, from its aerodynamic exterior to its chassis, has been redesigned for the new century.”

The much-heralded 6000LX, like the Featherlite VantarŽ, features a parade of technological innovations, including in-motion satellite systems, a 42-inch plasma TV, fiber-optic lighting and state-of-the-art security.

The Featherlite Luxury Coach Division “is the largest Prevost bus conversion and custom luxury coach manufacturer in the world,” Hall says. Headquartered in Sanford, Fla., it has four company-owned sales and service centers and 16 authorized service centers strategically positioned throughout the United States to service owners of any coach brand.

And while Vogue has made plenty of news since the spectacular 6000LX launch late last year at the NASCAR NAPA 500, the Featherlite VantarŽ H3-45 Prevost Conversion and other models have come to represent a new industry level. They’re built to custom specifications, are computer-designed and are constructed using state-of-the-art components – everything from a choice of floor plans and seating to sound systems, closed-circuit TV, keyless entry, voice intercom, Corin navigation systems and more.

The luxury coach division figures mightily in Featherlite’s ongoing corporate strategy. The company is in the process of consolidating the Prevost conversion manufacturing operations from Pryor, Okla., to its Sanford facility. “We will manufacture the Prevost conversions in Sanford, where our VantarŽ H3-45 coaches are now produced,” according to Eric Clement. “The Pryor facility will focus on the development and production of the Vogue series.”

Interestingly, Featherlite, which has annual sales in excess of $240 million, has seen a significant shift in its business. “More than 75 percent of our revenues are from end users in the motor-sports and leisure/entertainment categories, including horse trailers,” according to Eric Clement. “Combining that with our solid position in horse, car and livestock trailers, we are strategically poised to benefit from growth in these markets.”

Featherlite has recently introduced several new models of horse and livestock trailers. “Last year, we saw continuing advance in several arenas, including the horse and stock industries,” Clement says. “We also added a record number of new dealers.” That dealer network now numbers more than 250 full-line operations in the United States and Canada, plus a number of dealer outlets that handle only snowmobile, all-terrain vehicles and other small utility trailers.

Specifically, “last year we introduced 24 new and enhanced trailer models, and we have unveiled more this year. Featherlite quality is accessible to every market niche,” Clement says. “We’ve also announced new feature enhancements in our horse trailer line that are unique in the industry.

The company’s line of horse trailers includes the 9900 series gooseneck trailer with stainless steel exterior skin; the all-aluminum 9000 and 8500 series; the 8400 “combination trailer” series, for use with both horses and other livestock; and the 5000 series steel trailers. Stock trailers include the 8200 series with a variety of custom features; the 8100 series of economical, standard models; and the 5000 steel trailer series.

Besides the Featherlite line of custom and standard specialty trailers and the luxury motor coach division, there’s also the Diamond D Division, which produces steel trailers for a variety of uses. In the commercial sector, the company’s products range from dry freight haulers to flat-bed and truck-bed trailers. The Featherlite Aviation Company offers professional aircraft brokerage and consulting services, specializing in Beech and Cessna twin-engine and turbine-powered product lines.

On top of that, “we’re very excited about our line of mobile marketing trailers,” Eric Clement says. He notes that they’re being used for everything from display units to mobile classrooms, hospitality trailers, kitchens, offices and vending services.

“When companies want a powerful tool for niche marketing that travels to the customer, they come to us,” Clement continues. “Our specialty trailers have eye-popping graphics and custom interiors. They are put to work for everything from television studios, product demonstrations, mobile billboards, museum displays, brand marketing and interactive experiences.”

That includes classroom experiences. “We can incorporate anything from laptops and multimedia technology to high-tech equipment for a specific industry to turn a trailer into a classroom on wheels,” says Clement.

“When it comes to diversification, we put the customer in control,” he adds. “The specialty trailer is that which the customer creates. Our engineers and sales staff sit down and listen to the customer’s ideas and incorporate them in the design process.”

Processes for the Future

As for the future, “we’re focusing on efficiencies and improving manufacturing operations in all areas,” says Conrad Clement. “In the specialty trailer division, for example, the impact of our new manufacturing processes and efficiencies will mean a lowering of retail costs on certain trailer models without an adverse effect on margins.
“All of that, combined with our reputation for product innovation, quality and attention to our customers drives Featherlite,” he continues. “Our business segments are well-positioned to benefit from continuing growth in the leisure, recreation and entertainment categories, and we expect to continue to strengthen all of our product lines.
“With improved manufacturing processes, a solid dealer network, and talented and motivated people throughout our company,” Clement concludes, “we are confident in our ability to continue to achieve success.”