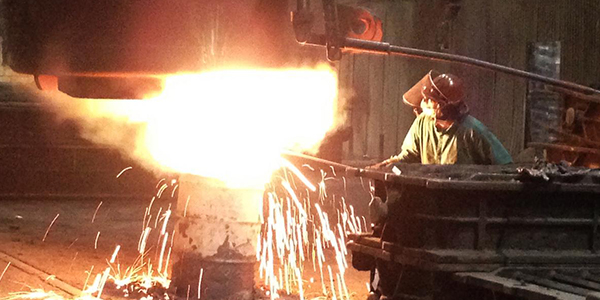 There are few companies that have been around as long, have endured ups and downs in their respective markets, and yet still have come out on top as a leader in their industry today like Columbus Castings.

Columbus Castings took root as a company back in 1881, beginning as a small iron foundry and operating under the name Murray-Hayden Foundry. Over the years it changed its name to Buckeye Steel Castings, then later to Columbus Castings, and shifted its focus from iron to steel in the process. Throughout the last century, in addition to becoming a trusted brand by rail and mining businesses, the company has also served an integral role for the U.S. government in World War I, World War II, the Korean War, and the Vietnam War by providing castings for a variety of military needs, ranging from bailey bridges to tank turrets.

“We’re very proud of our history and how far we’ve come to get to where we are today,” says McCuan, adding, “the fact that we’re an American company, with American employees, and hold deep ties to the our country’s history over the last hundred years, it’s something we definitely strive to encompass and reflect in our company’s values each day.”

Today, Columbus Castings serves a multitude of industries, designing and manufacturing a variety of high- quality steel castings and earning the trust and approval of countless businesses along the way. And yet, for as deep-seeded as their history is, it wasn’t easy getting to where they are today.

In 2002, the company was hit hard financially due to a weak freight rail market and the subsequent effects of the post-9/11 economy. They were forced to file for bankruptcy, and it seemed as though that was the end of their story. However, at the last moment, Don Malenick, a former president of Worthington Industries, recognized the significance of the company’s history and its potential impact on other industries and stepped in to provide the spark and direction the company needed.

Twelve years later, Malenick’s devotion to Columbus Castings has proven to be well-founded, as the company recently wrapped up a $70 million contract with Amtrak in November of last year, is adding 50 additional jobs as a result of the deal, and is staring down a new year that is characterized by a significant amount of exciting new business avenues. “Last year, with the Amtrak contract as well as the unveiling of a new product development plan, had us feeling very good about our position as a company in terms of revenue and growth,” McCuan says, adding, “but 2014 looks like things are going to get even better, and we’re very excited about it.”

So how has Columbus Castings risen from the grave over the last decade to become a leader and the go-to choice for businesses requiring large-scale steel castings? “One of the things that is unique about our company compared to our competitors, is that, due to our physical size of our production facility and its capabilities, we are able to manufacture steel castings to a size that no one else can match,” says McCuan.

Headquartered in Columbus, Ohio, Columbus Castings’ sole manufacturing facility spans 90 acres, including nearly a million square-feet of floor space (22 acres), and is run by nearly 750 employees whose roles range from senior executives and sales personnel, to engineers and crane operators. In terms of production, Columbus Castings manufactures all types of castings, including bolsters, side frames, couplers, yokes, and knuckles, and have supplied such parts to industry giants like Caterpillar and Hensley. In addition to offering a variety of different parts, Columbus Castings’ has a production capacity that starts at 90 pounds and goes all the way up to 70,000 pounds.

That 70,000-pound figure is what elevates Columbus Castings above other steel casting manufacturers, and has also opened the doors to business in plenty of new areas as well. “We currently do most of our business in mass transit, as well as freight rail, and provide parts to the mining and oil industries,” McCuan says, adding, “but lately we’re expanding more and more into the power generation industry and are in talks with a major automotive company as a result, and this is all because of our ability to produce up to 70,000 pounds.”

McCuan says that while the rail industry has ebbed and flowed quite a bit over the last few decades, their business arms in both freight and mass rail have allowed them to stay afloat and remain competitive. “Between the industrial and mass transit markets, while these markets do go up and down, they tend to do so opposite of each other,” says McCuan, adding, “so where one market is down, the other will be up, and we’re able to use this balance between them to continue to churn business forward. I think that’s a testament to our current leadership and their oversight.”

Because of the potential size of scale of their production, the manufacturing process that goes on inside their facility is a bit different than a typical assembly line-like process. Where forklifts and flatbeds are sufficient in moving the smaller products like knuckles to and from production stations, Columbus Castings uses actual rail cars to move their bigger products from place to place. McCuan says that the company has recently invested heavily in lean practices, and it has improved their manufacturing process significantly. “We’ve implemented lean manufacturing in our facilities here in Columbus, and the effect has been great in that it takes a long time to make these castings, but now we are ensuring that everything is moving as efficiently as possible,” she says, noting, “and this allows us to be extremely confident in our lead times and the quality of our product overall.”

And that’s where the true value lies. While other companies could easily purchase steel castings from countries like China and India, between the actual production process and then shipping the products to North America, lead times can take as long as 12-14 months, with no guarantee of quality. Columbus Castings, on the other hand, produces and ships average-sized components in a little as 12 days, with larger components taking only nine weeks. Faster production and supreme quality, it is just the name of the game.

Columbus Castings has taken their improved production process and higher standard of product quality and used it as fuel to charge full-steam ahead into 2014. With a storied history, a dedicated workforce, and a river of business flowing through their doors, Columbus Castings has set itself up to be an impactful player in the mining, freight and mass transit rail industries for many years to come.