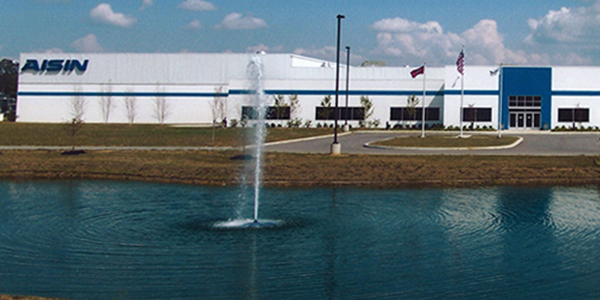 When you call Aisin Automotive Casting in London, Ken., don’t be surprised to hear a snippet of country music on hold: Well, I miss Mayberry; sittin’ on the porch drinkin’ ice cold Cherry Coke…

It is the fusion of cultures in today’s global auto market that enables one to call a subsidiary of a major Japanese auto parts maker and be greeted with a ditty from a band named Rascal Flatts, whose song, Mayberry, laments modern progress and longs for the good old days of “watching the clouds roll by.” Fortunately for the economy in the Southern U.S., cars are rolling off assembly lines instead at Toyota, Honda, and Nissan plants. While the big three U.S. automakers are outsourcing some of their operations, these three big Japanese automakers continue to expand.

Aisin (EYE-shin) Automotive Casting (AAC) supports the auto giants. AAC is a division of Aisin Seiki Co., Ltd. of Japan. The parent is a privately held Fortune 500 international company and world leader in production of auto parts and systems with 44,000 employees and more than 100 facilities worldwide. Its North American operations, Aisin Holdings of America, Inc. include more than a dozen subsidiaries in the U.S., Canada and Mexico.

AAC was established in Kentucky in 1996; a year later, it was shipping parts. Mass production began in April 1998. In July 2000, AAC completed construction of a second facility on the London site and production there began in March 2001. Both plants were further expanded in July 2003. The total capital investment exceeds $170 million. AAC sales are projected to top $200 million by 2005.

State of the Part
AAC’s 600 employees and high-tech facilities are perfectly positioned to serve customers throughout the Eastern U.S., extending into the Midwest.

The company’s turnkey process, from die cast to component assembly, is meeting its customers’ increased demands for parts for vehicle production in the U.S.

“Most product that we ship is ready to install in the vehicle,” says spokesman Bruce Daeger. “For instance the water and oil pumps include all the components contained to make an operational pump. All the auto makers have to do is install it on the engine when it’s received.”

Despite these impressive numbers, the real story of Aisin Automotive Casting is one of quality, not just quantity. AAC is a brand leader in engine-related functional parts and die cast parts that are essential to a vehicle’s functioning and reliability.
“In older die casting processing, aluminum was hand-ladled into the molds but we have robots to do that and much of the trimming,” Daeger says. “It’s more precise and not as labor intensive as older processes.”

“If you’re drilling 50 holes in a part, how do you know those holes are there? Number one, a sensor confirms that the drill is doing what it’s supposed to do. Then, before the part finishes that process, it goes into a testing machine that probes to make sure the hole went all the way through the part if that’s what it was supposed to do, or goes to a particular depth,” Daeger explains. “When the customer receives the part, they know it’s ready to install and tested many times for functionality and consistency. Our business has been growing and we believe it’s because we focus heavily on quality and giving the customer what they want.”

Meeting Specifications
AAC can engineer original parts or use designs provided by its customers. “We have both cases – we may use customer specifications to make a part, or design and engineer a functional part with the customer,” says Executive Vice President Hisashi Hatta. “As a supplier, we are experts in our field for our customers, and we expect suppliers to provide the best product available to us.”

Environmental production is another priority for AAC. Aluminum metal is recycled as part of ongoing environmental improvement programs.

In addition to the Kentucky operations, the company has just broken ground for construction of a new plant in Clinton, Tenn., slated to be operational in August 2005. The expansion responds to increased regional production by Toyota and other customers. The two locations will plan operations together to maximize efficiency and expertise. Kentucky will specialize in aluminum casting, including manufacturing large casting parts and molds; Tennessee will operate a full-process, die-casting facility to include casting, machining and assembly of aluminum engine components such as pumps and pistons.

An enlightened, community-oriented company, AAC’s philosophy is to “Always Respect and Appreciate.” The company seems to have a sense of its place in the global market and also its down-home roots in the local community. Events like picnics and cookouts are almost as important as parts testing procedures.

“It’s not only the internal relationship among our employees that counts, but externally with customers, suppliers and the community,” Hatta says. Maybe Mayberry isn’t so far away after all.