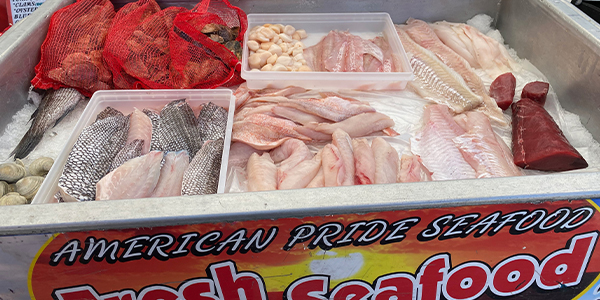 Six-hundred-million pounds of Alaska Pollock is a lot of chowder flowing into the stomachs of Americans. Keeping our sated palates for seafood at an all time high, as the demand for fresh fish also rises, is American Pride Seafoods, a company within the larger umbrella of Seattle, Wash.-based American Seafoods Group, one of the largest integrated seafood companies in the U.S. in terms of revenue.

It is a company in which the word “largest” is used frequently. Consider: In the U.S., American Seafoods Group is the largest harvester and at-sea processor of Alaska Pollock and hake and the largest processor of U.S. farm-raised catfish at its Southern Pride Catfish plants in Alabama. In addition, American Seafoods Group harvests and/or processes additional seafood, including cod, scallops and yellowfin sole.

With all of these notably large and efficient operations, it is the company’s goal to redefine the industry “by bringing together resources, people, ideas, and quality seafood products” under one brand called American Pride Seafoods. The Southern Pride and Frionor brands represent the best in aquaculture and ocean harvest, with years of experience in the business selling seafood and U.S. farm-raised catfish to the consumer, to large food brokers, and to other food service institutions.

Traditions from north to south

Catfish is a tradition deeply ingrained in the culture of the Southeast and is taken very seriously by the people of Southern Pride Catfish LLC of Greensboro, Ala. Starting at the farm, brood fish are carefully chosen for rapid, healthy growth, and processing characteristics. The catfish are raised in a quality-controlled environment of pure spring water pumped from underground wells, feeding on high-protein floating food pellets consisting of soybeans, corn, wheat, vitamins and minerals. And because the pellets float on top of the water, the fish feed on top of the water, unlike wild catfish that feed on the bottom of the river or pond.

Two of Alabama’s largest catfish processing plants are operated by Southern Pride in Greensboro, and Demopolis, Ala. They also operate one of the largest in-house harvest and live-haul departments in the United States. With most of Southern Pride’s harvesting ponds located within 60 miles of the processing plants, catfish often are processed less than one hour after being harvested. Fresh products are delivered within two to three days of processing. This guarantees that customers have the freshest products on the market.

American Pride is an innovative company, having installed quite a number of technologies to computerize and automate in order to perfect quality control issues. Indeed, since the brand’s beginning in 2002, American Pride has been dedicated to comprehensive quality control, strict safety standards and meeting customer needs for popular seafood products. By maintaining a steadfast commitment to quality, the company has grown and prospered. As far as Pollock and cod fishing in North America, he explains that this catch is monitored very carefully by the government. Pollock is the most stable catch in the world because of quotas; it’s the same with scallops on the East Coast. The government makes very certain that there is no over fishing. Also, the Alaska Pollock Fishery has been approved by the Marine Stewardship Council (MSC) as a sustainable fishery to promote the responsible management of our ocean resources and the marine eco-system. Any company that meets the chain of custody requirements and is approved by the licensee, the At-Sea Processors Association, is eligible to display the MSC logo. American Seafoods Group meets all of these criteria.

At present, the company processes up to 10 million pounds in gross weight of scallops a year and up to 100 million pounds of catfish. In its pond-raised operations it raises between 50,000 to 100,000 pounds of catfish per acre, which are then hauled live to the processing plant where they are processed. “There’s no middle man; we are the first handler for the fish so we are able to watch the quality from the beginning of the catch to the end user.”

Such attention to freshness also applies to the Frionor brand name, which means “frozen of the north” and represents the premium-quality frozen fish fillets and value-added seafood products the company has produced for more than half a century.

This facility also produces quality sea scallops from the New Bedford plant under the American Pride Seafoods brand name. Here the company processes everything from fillets to fish sticks and a number of specialty items geared towards the nation’s school, health care, senior care, college and university, hotel, fast food, family, cafeteria and buffet, and business and industry sectors of food service.

Something to cheer about

In spring 2004, American Pride Seafoods and Disney Consumer Products developed a plan to offer quality frozen seafood products to consumers. After months of product research and development, four new breaded, frozen seafood products were developed to offer to the general public. The new items were all created using premium quality Alaska Pollock, harvested in the cold waters of Alaska and frozen at sea for maximum freshness.

Pizza Fins, featuring Lilo and Stitch. These are pizza flavored, crunchy breaded fish wedges with the taste of real pizza;

Dip Sea Dooz, featuring the Little Mermaid and Friends, are crunchy bite-sized seasoned fish nuggets, perfect for dipping in a variety of sauces.

There are other ways in which American Pride Seafoods is keeping up with consumer demand, particularly in the way of healthful products, an area in which the company has aggressively acted on by removing trans fatty acids from its existing par fried products.

The company now par fries its products in non-hydrogenated canola oil, which enables it to eliminate trans fatty acids, or trans fats, in its breaded seafood products while maintaining outstanding flavor and taste, according to Margaret Malkoski, director of research and development for American Pride Seafoods.

Trans fatty acids, or trans fats, have been shown to increase the risk of coronary heart disease by increasing the level of LDL, or “bad” cholesterol in the bloodstream and reduce the level of HDL, or “good” cholesterol.

In a new set of dietary guidelines released in 2005, the U.S. Department of Agriculture recommended that consumers limit the amount of trans fats in their diets as well as increase the consumption of fish to at least twice per week as part of a healthy diet. However, trans fats are found in certain breadings and vegetable oils. By eliminating trans fats from the equation, American Pride has made it easier for consumers to enjoy breaded fish products regularly.

“We understand the importance of promoting a healthy product for our consumers and will continue to research and develop new ways of improving the quality,” Malkoski said at the time of the announcement. “We strive to develop seafood products that consumers find appealing, products that provide good value, good taste, and better nutrition at a competitive price.”

Because of these measures, combined with the care and attention to every detail that has become the company’s hallmark, American Pride Seafoods will continue to deliver the freshest seafood to the dinner plate serving you with pride in its quality and taste.