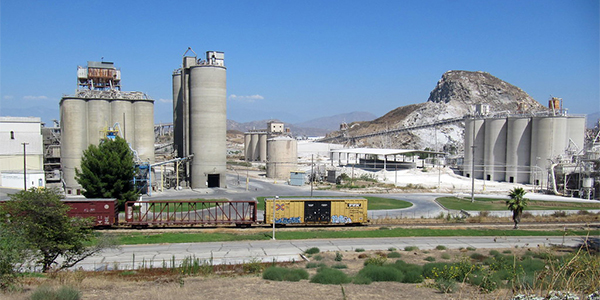 California built its reputation as the “land of opportunity” where people sought their fortunes prospected for gold. At about the time that the dream was getting a bit shaken, particularly with an earth moving event in San Francisco, a business set up shop with a less glittery material, but with better long lasting results. The Southern California Cement Company opened in Crestmore, Calif., in 1906 and in 1910 purchased a six-kiln plant in the gold mining town of Oro Grande. “Oro” is the Spanish word for gold and one might say that the company has had the golden touch since.

Further proof of its site’s importance can be found in a narrative by Joyce Wade, writing for Route 66, the Web site dedicated to the history of the old national interstate highway that passes a few miles beyond Oro Grande, who notes: “Using cottonwood from the riverbank as fuel, a crude lime was used in mixing the mortar. Today, the cement plant in Oro Grande had its origins from that frugal beginning. It was this plant that brought people to the community. Who would have thought that British pound sterling helped to develop the plant? Mrs. Potts, the original owner, was able to prove to English investors that in quarrying limestone for the cement plant, rich deposits of gold ore would be uncovered. Therefore, the investors would reap a double return on their investment; gold and cement.”

Gold prospecting isn’t much of a, well, prospect, these days, and the English investors have long since taken whatever profits out without further returns. But the cement company remained and has had many years of concrete success; in fact, this year marks its centennial celebration. Renamed in 1910 the Riverside Portland Cement Company, it since has been shortened to simply Riverside Cement after the nearby city. Today the company is an integral business unit of Texas Industries, Inc. (TXI), a leading regional building materials supplier specializing in cement, concrete and aggregate. TXI acquired the company in 1998, increasing its cement production capacity by 60 percent and expanding its operations to the West Coast region.

From Riverside’s perspective, the acquisition brought in capitalization to fund a doubling in production capacity from the 1.2 million tons of cement per year to a projected 2.2 million tons in a highly automated plant that Riverside expects to go on-line next year, according to Tina McIntyre, marketing manager. “Together with out general contractor Zachary Construction, we’ll have a complete plant redeployment right next to the existing plant.” Perhaps even more important than the doubling of capacity is newer technology that will be cleaner and more efficient than the old kilns. Productivity gains are expected to be significant. The Portland Cement Association reports, for example, that “the average kiln in use today produces over 60 percent more cement than an average kiln produced 20 years ago.”

The Next Century
“Modernization is how we can best respond to the competition,” McIntyre explains. In fact, Riverside will retire the old plant completely. “We’ll sell or recycle what equipment we can, and there may be some things we can still use, but it’s a case of out with the old and in with the new,” she points out.

As an historical footnote, the Oro Grande plant was shut down previously, back in 1928, but that was because it was unprofitable. It was re-opened again during World War II to support the war effort and its seven kilns continued to support the economic prosperity and growth that followed. The new facility positions the company for the opportunities of the 21st century throughout the region, in addition to Las Vegas, Nev. and Phoenix, Ariz., as well as northern California.

With 400 employees, Riverside has the advantage of an established brand identity, now backed by the considerably corporate resources of TXI, marketing its cement products through a direct sales force to two kinds of markets: bagged and ready-to-mix. “Our primary market is the ready mix,” McIntyre points out.

For its other market segment, Riverside is unique in that it is the only cement company in the region that also has its own bagging operation. “What makes us stand out is our customer support. That’s always been a firm foundation of the business. No one can match the technical knowledge and experience that we offer
our customers.”

Riverside also offers some unique product line variations, such as plastic cement that can be used to make stucco, a popular building material in the region. It is also one of only two manufacturers of white cement. “One of its applications is for swimming pools because when you add color to it you get something more vibrant than you would with typical gray cement,” McIntyre says. “It’s an aesthetic option.” She adds, however, that white cement is primarily a bagged product. “Ready-mix so far hasn’t embraced it, largely because of the extra cost. To make cement white, you have to remove the contaminants that make it gray.”

Cement, like that of most of the other building materials, is closely tied to that of the construction industry. From Riverside’s viewpoint, a slight softening in the construction sector notwithstanding, the overall road ahead is paved with success. “We’re doubling our manufacturing capacity to keep up with demand, and we foresee continued sales growth.” That’s a mixture that will yield some hard results.