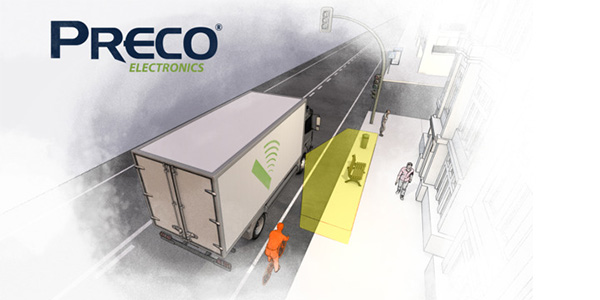 Preco, Inc., of Boise, Idaho, is the recognized market leader in industrial safety products. Thanks to its high-quality production of alarms, visual warning systems, strobe lights and rotating lights, Preco has built and maintained strong relationships with many of the top original-equipment manufacturers of computers, instrumentation and commercial vehices. On the walls of its headquarters rest plaques honoring Preco as Supplier of the Year from customers such as Caterpillar, CaseNewHolland, PACCAR, FreightLiner and John Deere; in several of these cases, Preco has had relationships of more than 25 years’ standing.This is not only a solid customer base, but it serves as a strong foundation for Preco’s next giant step forward. The company believes that with new developments in wireless communications technology it can expand its scope into the growing field of commercial-vehicle electronics. This involves equipping trucks and vans with computerized, wireless devices that allow drivers to communicate with their home offices from inside and outside the cab, and for the vehicles themselves to inform the drivers of engine problems (information which could also be received simultaneously by the home headquarters via the World Wide Web).

The Preco product line utilizes numerous technologies including SAE J1708/J1939, pulsed-radar, GEO satellite modem capabilities, wireless sensors, and 802.11 high-speed wireless communication protocols. With its on-staff engineering expertise and the strong relationships it has built with its customers, Preco believes that it can further boost its already strong business and become a forerunner of this new product wave.

Out of the Shed

This is heady stuff for a company that got off to a humble start. Founded in 1947 by Ed Peterson, who began by building automobile alternators and starters in his metal shed, over the next 53 years, Preco Electronics added new products, eventually becoming the market’s chief manufacturer of industrial safety products. It also grew through acquisition: In 1981, the company acquired SCP Global Technologies, a leader in the semiconductor fabrication industry, and in 1996, it purchased Ampro Computer, known for its embedded PC technology.

Despite growth, the company remains true to its mission statement, “to be recognized as a world-class innovator, designer and manufacturer of electronic products providing products and services that exceed its customers’ expectations. The company has backed its innovative reputation over the years with several safety-product developments, including the first electronic backup alarm, sensors and strobe lights, dash instrumentation and intelligent gauges and control systems.

Preco’s growth in the commercial-vehicle electronics field is a vivid illustration of how it adheres to the letter of this statement. Bill Powell, Preco’s strategic marketing manager, calls commercial-vehicle electronics “the real growth opportunity” for the company. “There is a strong trend in the transportation industry to expand in this field, and we’re talking about a multibillion-dollar industry,” Powell says. “The opportunity is there to place this technology in all types of transport vehicles. Because of our established credibility in the industry, we already have strong relationships with the large truck and truck-equipment OEMs.

As Powell explains it, the technology allows a transmitter on a trailer to communicate with the truck itself. It provides a secured technology for information on-vehicle, which, for example can say, “Hey, your truck is overheating.” Plus, through additional communications technology such as cell, wireless area network or satellite, this information can even be transmitted to the Web where any authorized person may view it.”

Preco’s chief product in object-detection systems is its PreView system. Russ Fulcher, the company’s vice president of sales and marketing, explains, “This device is mounted in the “blind spot” areas on a vehicle and it uses pulsed radar technology. The system allows vehicles to detect nearby people or objects to avoid hitting them while backing up or making a lane change. PreView could help reduce crashes and fatalities. ”

The system remains effective regardless of weather conditions. Pulsed radar, explains Fulcher, detects stationary or moving objects. “It will detect out to 26 feet.This extends our safety line into a higher technology area.”

In addition, Preco’s Precise(tm) asset management and tracking system enables companies to save time and money but alerting a central operator to potential problems while the vehicle is on the road. “We feel from a management standpoint this is important,” explains Powell. “A manager can work to pull up information on the vehicle, from the engine control module, such as how fast is it going? What is the fuel consumption? What is the oil pressure? He can detect a vehicle that may have left its defined area (‘geo fencing’). You can take this information and transmit it back to fleet headquarters.” This technology also enables the truck the ability to store information – if the vehicle is broken down 200 miles outside of headquarters, information on the problem can be transmitted back to the systems manager who then will be able to dispatch a technician with the right parts to fix the problem.

“From our research,” he adds, “a top concern among operators is scheduled maintenance.” Being able to fix a potential problem before a breakdown saves companies downtime, which ultimately effects the bottom line.

Myriad opportunities exist for Preco because of both its manufacturing expertise and its already-established technology leadership, says Powell. The company’s facilities are in the Boise headquarters and in Morton, Ill.; the combined manufacturing space measures 100,000 square feet. Preco currently employs about 500. Among its impressive list of capabilities are extensive circuit board-level assembly, double-sided mixed technologies, aqueous or no-clean soldering, fine-pitch component placement, ball-grid-array (BGA) placement and Xray inspection.

“We have state-of-the-art facilities,” says Powell. “We use surface-mount and through-hole technology. We’ve also created a small-company atmosphere in which people know each other and can walk into the executive offices any time. We have meetings in which we share successes. Our people feel involved and take pride in our successes.”

The technology leadership is evident in one of Preco’s most recent introductions. Preco has established a firm foothold in the market for object detection systems for buses, specialty vehicles, construction equipment, commercial vehicles in trucking, delivery vans and large on-road trucks – ranging from 10,000 pounds to 33,000 pounds.

Although the potential for new growth in the overall safety-products market is limited, Powell says the PreView system could bring new life to the field. He says PreView is an example of a product that falls within the scope of the recent Intelligent Vehicle Initiative, a policy formulated by the U.S. Department of Transportation that calls for such products from the industry.

“We can jump in there and help vehicles meet these objectives,” Powell says. “The Federal Motor Carrier Safety Administration, formed in January 2000 by DOT, reported that businesses spent more than $9.5 billion in 1998 on crashes involving combination truck units, and $5.4 billion on crashes involving single-unit trucks. This money went to the costs of these accidents to equipment, and costs in terms of injuries and saving lives.”

Both commercial-vehicle electronics and intelligent safety products should take Preco far as it attacks the international market. Powell says, “We see the European trucking industry as a big opportunity for both trucking and off-highway equipment, as well as for public-transit vehicles, and we’re building our presence there through distributors. Asia is a large opportunity, too, both in transit and off-highway equipment.”

Between its open culture, its technological leadership and the opportunities it is embracing in end uses, Preco is well prepared for growth in the near and far future. Already, it is one of the 10 largest privately held companies headquartered in Idaho – and its sights are set even higher.