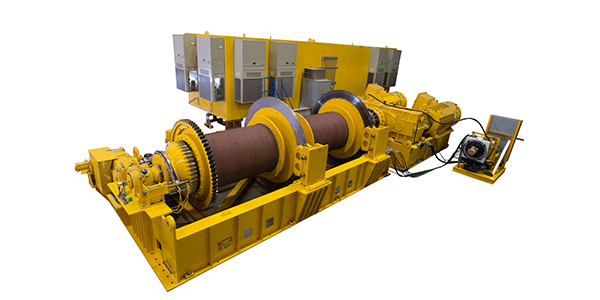 It is well known throughout the industry that equipment produced by Timberland Equipment, Ltd. complements the intrepid visions of men leaving very large footprints on the face of our planet. Where a tough project requires specialized offshore mooring equipment, derricks at construction sites, tugboat winches, such as those at the Panama Canal, or electric conductor handling equipment in some of the largest electrification projects, Timberland is there with custom-designed, custom-engineered solutions helping achieve the Herculean goals of these demanding projects.

Timberland enjoys worldwide recognition as a leader in winching and hoisting technology, first applied to logging equipment more than 50 years ago when the Woodstock, Ontario, company first opened its doors. “Our name, Timberland, comes from those beginnings in 1947 as a leader in the logging industry with our timber tossers, rope blocks, sawmill power units, yarders, and logging winches,” says Brad Vollmershausen, general sales manager and grandson of company founder Wes Magill.

Once skidders were invented, Timberland looked beyond the world’s forests. Today, the ISO-9001-certified company successfully has transferred that repository of winching and hoisting technology to four thriving business segments within worldwide construction, marine, electric utility, and mining industries.

Power to the People

Timberland garnered much of its global name recognition and engineering respect through its presence in the electric utility industry. “This is the product line we are best known for throughout the world,” says Vollmershausen. Timberland pullers and tensioners are used to install or replace new conductors for electrical distribution and transmission lines. “We were a pioneer of this type of equipment in the 1960s and 1970s and we began exporting these products in the 70s, particularly to China through the efforts of our current owner Walter Booth.” The company’s success in the China market continues today through the leadership of company President Mark Gabourie, he adds.

Electric conductor lines arrive at job sites coiled on wooden reels. “So it has to be uncoiled, but you can’t drag the conductor on the ground when you are installing it, or you will damage it,” Vollmershausen says. Conductor is run through tensioners that maintain tension on the conductor to keep it off the ground as it is pulled through pullers during the installation process.

One of the company’s highest-profile projects in this arena involves the Chinese Three Gorges project on the Yangtze River (third-largest river in the world) in Hubei Province. When completed, Three Gorges will be the largest hydroelectric dam in the world. “We’ve sold some packages already to them and we have a few more in the process of being manufactured,” continues Vollmershausen. Timberland equipment in this project includes the largest sets of pullers and tensioners ever sold in the world, offering an impressive capacity of 28 tons. The company hopes to receive more work from this project as it progresses toward completion.

On Land and At Sea

In any city at any given time new buildings are being constructed. These construction projects depend on Timberland derricks to dismantle tower cranes when the project is completed. These derricks also lift construction material to work sites as construction proceeds upwards. “This equipment is portable in that it can be transported to the work site on a freight elevator,” notes Vollmershausen.

Timberland technology also is used in the installation of cell phone towers. “We manufacture the tower hoists for tower erection companies and we offer the largest tower hoists available in the industry,” Vollmershausen says, noting that this segment is currently extremely active.

The company’s marine business is divided between two segments: offshore oil and gas applications and workboat operations. Selling its mooring equipment indirectly to global oil companies like Exxon and Conoco, Timberland supplies mooring systems, winches, chain stoppers, chain jacks, and hose reels for these applications. One high-profile Timberland application is an Exxon project, called ‘Kizomba,’ which is an FPSO (floating production storage offloading) vessel. “Our customer for this project is Hyundai Heavy Industries in South Korea,” Vollmershausen says. Hyundai was contracted by Exxon to construct and outfit the oil explor-ation vessel which will work offshore of Africa.

Timberland’s offshore marine business offers the most growth potential. The company expects to meet some challenging requirements over the next few years in its offshore marine business as oil exploration operations move into deeper and deeper waters. “Our equipment will have to be larger, so we will have to manufacture the equipment so it’s not only durable, but easily transportable,” Vollmershausen says.

A high-profile Timberland project involves supplying the Panama Canal Authority with tugboat winches. “They are expanding the canal’s capacity in terms of the size of ships that can pass through the canal; this requires new equipment,” Vollmershausen says. “They are both upgrading existing tugs and adding new ones.” To date, Timberland supplied winches for two tugs to its customer, Irving Shipbuilding of Prince Edward Island. “Irving is our customer and their customer, in turn, is the Panama Canal Authority. We installed the winches and trained their personnel in the use of them.” Vollmershausen notes that Irving Shipbuilding is in the process of building two more tugs, for which Timberland will supply winches. The company is hoping to secure the business for additional tugs to be delivered in the next few years.

Yet another workboat project Timberland is involved in is supplying Tutor Saliba (a general construction company) with 28 barge mooring winches and spud winches for work in area of the San Francisco Bay Bridge.

Diversity: Sum of its Parts

“Most of our competitors are in only one of either of the four segments in which we operate,” explains Vollmershausen. A company driven by its engineering strengths, Timberland maintains its success and stability through the diverse markets to which it applies its engineering expertise and prowess. “The offshore oil and gas segment of our company is very strong right now, even though a few years ago it was severely depressed,” says Vollmershausen. “But our other business segments were very strong. So it’s through this diversity that we manage to maintain a reasonable level of growth and profitability.”

This segment will account for more than 50 percent of the company’s business in 2002; in 2001 this segment accounted for 20 percent of the company’s revenues. “The price of a barrel of oil fluctuates dramatically, meaning if the price drops tomorrow, many of our projects could get cancelled. This would place a company focused entirely on this segment in jeopardy,” says Vollmershausen. “But for us, we just have to focus on other segments of our business.”

With its equipment working in diverse applications throughout more than 45 countries, Timberland is keenly aware of the local needs of its customers through the use of indigenous agents with local market insight, says Vollmershausen.

Today Timberland is owned by Walter Booth, the company’s current president, when the Magill family sold the company to Booth in the mid-1980s. The company employs 90 people in its 40,000-square-foot manufacturing facility in Woodstock, Ontario. It shares resources with its affiliated companies: Almon Johnson Ltd., manufacturing marine workboat equipment; TSE International in Shreveport, La., manufacturing pullers and tensioners for the US market and Marcotte Company in Sudbury, Ontario, manufacturing mining equipment.

“We will retain our No. 1 position worldwide in the electric utility equipment industry, while becoming more widely recognized as the leading provider of material and personnel handling solutions for the construction industry. We will also strengthen our market position as a leading supplier of mooring systems for offshore vessels,” concludes Vollmershausen.