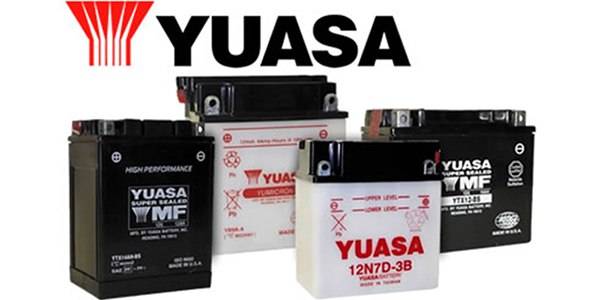 SO, HOW DOES A COMPANY WITH A JAPANESE NAME compete against low-cost Far East importers and continue to make its products in America? One word, according to Keith Ordemann, President and CEO of Yuasa Battery, Inc.: “Quality.”

It may seem odd that a company named Yuasa is championing the virtues of U.S. manufacturing. Therein lies a slightly complicated tale, the moral of which is that you don’t want to tamper with an established brand identity, even if it doesn’t quite reflect your local roots in Laureldale, Pa.

In the mid 1960s Yuasa Battery America, Inc. was formed in Sante Fe Springs, Calif. as an importer of batteries from its parent, Yuasa Battery Co., Ltd., Japan. Yuasa was the exclusive supplier to motorcycle maker Harley Davidson; at the time, the big four Japanese motorcycle OEMs were not yet manufacturing in the U.S.

In 1978, Yuasa built a 65,000-square-foot facility dedicated to motorcycle battery manufacture in Laureldale that continues today at an expanded 182,000 square feet corporate headquarters and manufacturing facility. Directly across the street from the new plant was its joint venture partner at the time, General Battery, which operated an industrial and automotive battery plant and smelter.

In 1987, General Battery was acquired by its chief competitor, Exide, and Yuasa had a new partner. But in 1991, Exide sold its industrial battery operations back to Yuasa and ended the partnership. At the end of a 10-year non-compete agreement, Yuasa decided to exit the industrial battery business and returned to its original business, though this time not as a supplier, but as a manufacturer of powersport batteries –for motorcycles, all-terrain vehicles (ATVs), watercraft, and snowmobiles.

The company in Laureldale was incorporated in 2000 as Yuasa Battery, Inc.; while Yuasa remained 100 percent owned by its Japanese parent, the corporate structure is 100 percent domestic. Parentage notwithstanding, the company’s biggest challenge has been to thrive as a made-in-America company against cheaper competition from Far East manufacturers. “I came on board in late 2001 with the task of adding and integrating corporate functions to what was essentially a plant operation,” Ordemann explains. “My background is in profitability improvement/turnaround management and it was that ‘lean’ process we all applied to the new corporation. We already had a product recognized by end-users and well established relationships with both OEMs and powersports distributors. The question became how do we keep manufacturing in the United States with a high quality product against predatory pricing practices of manufacturers based in Taiwan, China and Korea?”

PERFORMANCE LEADER
The company could have returned to its original role as a distributor, but it was felt that spending capital on plant reinvestment to lower operating costs and to produce new, higher performance batteries would set it apart from lower end competing products. “We live in a throwaway culture, and for some situations, a throwaway product is fine,” Ordemann says. “But in the powersports market, people like their toys, they don’t want to be without them and they’re willing to spend extra to get the reliability they want with added performance. Our batteries are more durable, are constructed for longer life, enhanced short resistance, can withstand the vibration demand of powersports and are capable of powering engines over 749cc. They all meet the Original Equipment Manufacturers specifications. In contrast, the low end batteries are just that; they typically don’t last as long, have fewer features and are more suited to the smaller (less than 400 cc) starting requirements and less demanding on-road environments. Many cannot adequately power the bigger engines and accessories that are increasingly becoming more popular. For most consumers, the higher performance and reliability of a Yuasa battery is worth the extra 15 to 20 dollars. It’s also why the OEMs are specifying our type of batteries for their new vehicles, because the quality of our product reflects on the quality of their product.”

In 1989 Yuasa introduced maintenance free products to the powersports market. The existing conventional product required the consumer to refill the battery with water periodically. In 2002, the Yuasa team launched a series of high performance maintenance free products to provide significantly greater power in the same footprint. High performance and historical maintenance free products now account for over 60 percent of sales. The company’s maintenance-free product is unique to satisfy the consumer and the demands of the distributor market. To remain factory-fresh, the battery is shipped dry along with its own pack of acid that’s added at the time of installation. They don’t sit on the shelf losing their charge and life until someone buys them. We’re the only American manufacturer that offers this kind of product.”

That said, however, Yuasa couldn’t afford to ignore price differential entirely and moved aggressively to reduce it’s cost structure. In 2001, manufacturing was highly labor intensive. By 2005, we squeezed out unnecessary and inefficient manual operations, and over the course of the past four years, reduced our payroll from 366 people to 270, with only a modest decline in units produced, Ordemann points out. “We have improved our processes to the point where you can’t justify making a battery much more efficiently than we do. Now our focus is on scrap and waste reductions. We have invested in new technology, applied Six Sigma principles to reduce variability, and achieved ISO: 9001-2000 certification. We also implemented outsourcing of battery components and batteries. Our focus is on high performance batteries that the market is demanding, but we pride ourselves on carrying every battery needed for the powersports industry. As the demand for batteries out of OEM production for ten years or more decreases, we’ve found it more cost-efficient for us to import them than to try to make them all here in Laureldale.

At the same time, Yuasa also emphasizes worker safety as a good business principle and as an example of how it values its employees. “We operate an extremely safe facility,” Ordemann can rightfully boast. “We’ve invited OSHA (Occupational Safety and Health Administration) to partner with us to set the highest levels of safety standards for this industry. In 2003 Yuasa earned the OSHA’s Merit status for its entire facility. Lead is a critical component in a battery; it is also a hazardous material. The federal standard for allowable levels of lead in a person’s bloodstream is 60 mcg/dl. For five years in a row, we’ve achieved a standard of less than 32 mcg/dl.”

He adds that, “We continually strive to be a good corporate citizen and operate a “green” facility wherever possible. We recycle much of our water through a reverse osmosis process that reduces our use of water by a third, and we maintain a wastewater treatment facility that discharges water with non-detectable levels of hazardous materials. With strict internal waste controls and a smelter still across the street from us, we’re able to reuse as much as 97 percent of our scrap material.”

ENERGIZING STRATEGY
The strategy from both marketing and manufacturing perspectives has been an electrifying success. In May of 2003, Yuasa produced its 50 millionth battery at the Laureldale facility; today, it is the number one powersports battery provider, supplying seven out of eight powersports OEMs in the United States, Canada, and Mexico.

This is not to say that Yuasa doesn’t feel the need to continue to recharge its business. “While we enjoy a 45 percent overall market share,” Ordemann notes, “we are losing market share annually to foreign imports. We’re also confronting the high cost of raw materials, lead in particular, which has gone up in three years from 23 cents a pound to over 55 cents a pound. It takes about 10 pounds of lead to make a battery, so that adds up to about $3.20 in extra expense. Like everyone else in the industry, these increases have been very difficult to pass on to the OEMs and we’ve only chose to share a portion of these costs in a surcharge to the aftermarket customers to remain competitive. These increases have more than offset the productivity gains of the past three years.”

Even as manufacturing costs go up and market share declines, Yuasa benefits from an expanding market. “I don’t know of many consumer categories that have grown each year for the past 13 years,” Ordemann says. “In addition it’s a fairly recession-proof industry. People are enjoying their leisure time more and the industry has done an excellent job promoting the excitement and stress-relief offered by the powersports market. The 9/11 tragedy and the increases in gas prices have also supported consumer investments in alternative forms of travel and recreation.”

Ordemann cautions, however, that Yuasa can’t depend on market growth alone. “We’ve achieved our initial goals of capitalizing the company, building on our relationships with OEMs and distributors, and making the best product. Now we’re looking at a three-fold strategy going forward: continuing to launch new products, adding ancillary products and services for our OEM customers, and diversifying by offering our production expertise and facility to other kinds of manufacturers.”

In the first instance, Yuasa will introduce a new high performance battery in July 2006 to fill a need the OEMs have not yet asked for but retail customers have been demanding. The YTX-14H will provide greater starting power and reserve capacity than Yuasa’s highest volume battery it replaces. “We’re offering the YTX-14H as a way to upsell the original equipment so that the customer can be assured of adequate specs for whatever gadgets they may add in the future.”

Yuasa also offers a line of chargers. “Particularly for watercraft that get dry docked in the off-season, you should take the battery out and store it to maintain its intended lifespan,” Ordemann says. “But most people don’t do that. They let it sit there connected to the engine. We now offer a 20-volt charger that enables you to recover a deeply discharged battery more effectively.”

Currently, manufacturing operations are at about two thirds of capacity, although certain departments are at near capacity due to the continuing trend toward maintenance free products. We’re looking to correct this before the year is over so that we’re operating an 85-percent max for a five day work week in each department,” Ordemann says. “We’re looking at opportunities to utilize our existing workforce to capitalize on available capacity. For example – our finishing lines will soon fill our needs in one shift. That leaves 16 hours a day where we could be finishing products for other manufacturers.”

“Our staff is experienced in the transport and logistics industry, and experienced in dealing with Asia. We distribute throughout North America. We have the infrastructure that we could take a product someone was importing from Asia, finish it here and then ship it in a seamless process that might significantly improve another manufacturer’s efficiency.”

This is probably the best revenge for an American manufacturer to demonstrate its superiority over foreign makers – something that Yuasa Battery certainly gets a charge out of.