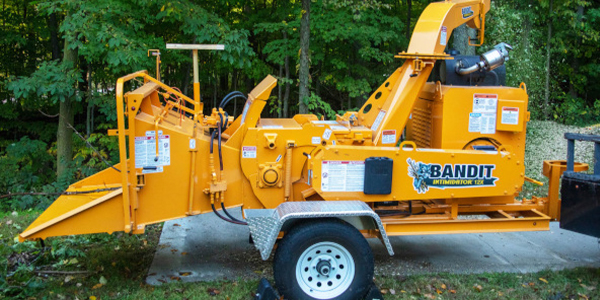 Starting out in a 6,000-square-foot facility in Remus, Mich., Bandit Industries founders Mike Morey, Sr. and Dave Forquer built a prototype of a hand-held chipper and got orders for 14 machines. Capital investment was provided with their personal credit cards. At the end of their first half-year of business, the entrepreneurs generated $90,000 in sales. With a loan from a local bank to fund expansion, the company was able to hire about 20 employees. Jerry Morey joined his cousin Mike to handle the marketing and sales side in 1987 as demand for the chippers began to branch out considerably. Beginning in 1990, Bandit added six new manufacturing buildings, averaging about one expansion every two years, currently totaling 240,000 square feet, a remarkable 40-fold increase over a 23-year period.

“I don’t think there’s a company in the industry that has had the kind of growth we’ve had,” Jerry Morey says. “As demand for our product grew and when our capital allowed, we added on, hired more people and built more equipment.” Today, annual revenues total $93 million, with 340 employees and a worldwide distribution network for its extensive line of innovative commercial whole tree and hand-fed wood chippers, stump grinders and waste reduction machines.

According to company lore, Mike Morey, Sr. was flipping through an encyclopedia looking for a character to personify his company. What caught his eye was the entry for “bandit” accompanied by the image of a raccoon, and the name “Brush Bandit” occurred to him as a catchy name for the company’s equipment.

As the product line expanded, so did the naming convention. The company introduced the first self-propelled whole tree chipper in 1991 under the brand of Track Bandit. In 1997, another character was added with the Beast Recycler that, true to its moniker, grinds hard to process materials including whole trees, asphalt, shingles, telephone poles, wet leaves and even refrigerators. And while other products have more generic names like “Whole Tree Chipper” and “Stump Grinder” followed by model numbers, the propensity for animal alliteration remains a time-honored tradition. Witness the newly introduced Color Critter II, an attachment for coloring mulch.

Bandit products serve the needs of three major market segments: tree care and forest industry, tree removal contractors for the utility industry, and the construction industry. And applications involve more than just tree processing. “Waste reduction is very important in the construction industry,” Jerry explains, “which has to be done in an environmentally safe way. You just can’t burn debris anymore. We offer machines that can, for example, process not only pallets and other wood-based construction items, but including roof shingles. In England, refrigerators are typically much smaller than they are here in the U.S. You just pull the compressor and toss one of these iceboxes in one of our recyclers and they’re ground into nothing in no time.”

He adds, “We’re making bigger, more sophisticated machines for the same reason as everyone is looking for better technology – to take as much labor out of the process as possible. But, also, we’re trying to make the workplace safer. This is tough work, and when you’re dealing with big trees anything we can provide to make handling of these materials both easier and safer is providing our customers with much desired value-add.”

Customer Appreciation
All of this makes for a loyal customer base. “We pride ourselves in delivering products that benefit users by supplying innovative, reliable equipment that meets customer needs,” Jerry says. “Consequently, as the market leader we’re often copied, which I think is a compliment.” But the best thing these imitators can do is chip away at Bandit’s market share without making significant inroads.

Bandit jockeys for number one position for its hand-fed chippers with one other major competitor. Various other smaller companies have limited products in different niches that might compete with Bandit. “We have the brand name,” Jerry says. “Customers know who Bandit is and our products and services are well-regarded.

Indeed, consider just two customer testimonials. Judd Hart, owner of J.H. Hart Urban Forestry, one of Michigan’s largest tree services, owns about 30 Bandit machines, from chippers to grinders. “The customer service is superior in every arena, from recyclers to small hand-fed chippers. No one’s ever scratched the surface of the things Bandit does, Judd says. “Case in point: One of our chippers broke and the salesman had one down the next day because he knew I needed it. I didn’t even have to ask. Bandit isn’t just a vendor, they’re a partner.”

Bandit also practices the oft-attested, but not always implemented, practice of listening to the customer. “The nice thing about Bandit is they were willing to work with us,” says Lorn Larson of Larson Logging & Tree Service. “They’ll listen to the ideas you have. I told them we had to have an articulating tongue on one of their machines. They’d never done it before, but they were able to engineer that for us. They’re just a great company. They listen to what the guys who are using the machinery need. That’s very important.”

Customization is an important part of the manufacturing process. “We build differently than other manufacturers,” Jerry says. “Instead of an assembly line where every machine has to be built exactly the same way, we have assembly teams that can easily modify and incorporate changes. The team approach not only allows us to control quality better, it enables us to easily incorporate the unique features that our customers want. Indeed, we invest a lot of time and money into R&D, but in many cases new product ideas come from our customers.”

Like every other manufacturer, Bandit has to deal with rising raw material costs, some of which have to be passed on to customers. “We work with our suppliers to keep costs down, but the price of steel has gone sky high, and we don’t have any choice but to add those costs into the price of our products,” Jerry says. Unlike other manufacturers, Bandit feels very little pressure from foreign competition. “To my knowledge, there are no Asian knock-offs,” Jerry notes. Bandit, however, has mastered the art of competing internationally against native manufacturers on their own turf.

International Presence
“Unlike in the U.S. where we are the dominant supplier, there are a lot more manufacturers in Europe. The difference is that they are comparatively small, each with their own narrow niche. Our wide range of capabilities enables us to get our fair lion’s share of the market over there; the expense of shipping hasn’t proven to be a cost barrier.”

While Bandit has strong sales in Europe, Germany is a tough market to crack. “Even though every country is part of the European Union, the purpose of which was supposed to establish one set of uniform standards that would make it easier to conduct business throughout Europe, that hasn’t always been the case,” Jerry says. “Individual nations still insist on their own regulations on top of the EU standards, which can be challenging to satisfy. We went through this in France, which was one of those things that if we knew how much trouble it was going to be we might not have done it. But, now that we have, we are making significant sales to France. I suspect the same process is going to happen
with Germany.”

The rest of the world, according to Jerry, is easier to do business with. “We don’t do much business with Asia simply because their environmental standards aren’t as high. We do business in other countries in the region, such as South Korea. We’re also big in New Zealand and in Australia.”

One recent sale to Uruguay illustrates another growing product category – used equipment. “Many of the machines that we sold when the company first started are still in use in the field,” Jerry says. “But, customers want bigger machines or additional capabilities. So we do take our machines back, refurbish them, and resell them. It isn’t a primary focus for us, but it does provide a nice little business and satisfies a customer need.”

Bandit sells through distributors, which typically carry anywhere from 15 to 30 machines, though the smaller dealers have lower inventories. “Obviously, distributors are our key link with our customers, and we fully support them. Regional managers are always calling on dealers to see how they can help, and we dispatch field technicians to help them solve customer problems,” Jerry says.

Trade shows are also a big part of the marketing mix. “We go to about 40 trade shows a year,” Jerry says. Interestingly, though, as important as face-to-face selling is to establishing and maintaining customer relationships, the Internet is playing a growing sales role. Says Jerry, “A lot of international sales come directly from people who see our products over the web site and order via email. Of course, we dispatch a service technician to the customer location when we ship the machine, but initial customer interaction takes place electronically.”

Continued Growth
As fast as the company has grown, Jerry sees no reason for it to slow down, for three reasons. “One is that development all over the world is continuing to expand. That means land has to be cleared and infrastructure maintained. Secondly, for environmental reasons, construction is very concerned with reducing waste and recycling building materials. Third is the effect of storms. It is going to take at least two years to completely clean up after Hurricane Katrina. While it’s unfortunate that these things happen, the reality is it does keep the commercial tree removal and clean-up business very busy. And, after they’re done, new construction follows.”

Jerry is quick to point out that even with the market opportunities and the products needed to address them, key to Bandit’s success all these years has been its people.

“A large percentage of our people have been with us, if not from the start, then for at least 10 or more years,” Jerry says. The fact that we have very low employee turnover shows that people like what they’re doing. Otherwise they wouldn’t be here. And you can’t make and sell quality products without quality people to do the making and the selling.”
So even if Bandit is stealing market share from its competitors, it seems only fair.