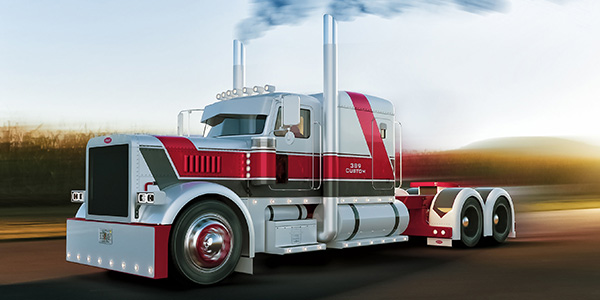 In 1938, T.A. Peterman, a logger and plywood manufacturer from Tacoma, Wash., bought a company called Fageol Motors of Oakland, Calif. The maker of trucks and buses had been in receivership for several years, and was in need of an infusion of cash (and entrepreneurial energy). Peterman had some experience re-building trucks, and in building his own business. The combination was the right medicine for the ailing Fageol. Initially, he wanted to use the company simply to build his own custom chain-drive logging trucks, but by 1940 the quality of the now-named Peterbilt truck had become a legend in its own time. A key reason was that Peterman sent his engineers into the field to find out firsthand what truckers wanted most from their product.

World War II interrupted civilian truck production, but the engineering and production expertise gained from fulfilling government contracts had Peterbilt off and running in the post-war era. Since then the company has survived numerous storms, including Peterman’s death in 1945, to retain its solid reputation for quality.

In 1958, Paul Pigott of Pacific Car and Foundry acquired Peterbilt as a wholly owned subsidiary, and promptly began building a modern production facility in Newark, Calif. In 1960, Peterbilt became a division of what was to become PACCAR, giving the parent two of the strongest nameplates in the trucking business (Peterbilt and Kenworth).

Demand for Peterbilt products grew, and so did its capacity: By 1969, the company had its second production facility in Madison, Tenn. That plant was doubled in size by 1973, a year that saw Peterbilt top the 8,000 mark in number of units delivered.

Peterbilt of Canada was established two years later (with offices in Ontario and British Columbia). The company’s newest assembly plant came on line in Denton, Texas in 1980.

Through the years, Peterbilt has concentrated on “delivering high performance, low maintenance and extreme durability that combine for low operating costs, driver productivity and high resale value,” according to company Vice President Nick Panza. Presently, its marketing sales, field service and accounting departments are all based in Denton.

Peterbilt and parent PACCAR both have R&D facilities that work closely in designing a quality product. PACCAR’s facility includes a sophisticated test track and state-of-the-art machinery. The new Peterbilt Engineering Lab in Denton has the space and equipment for hands-on product research. (Besides Peterbilt and Kenworth, PACCAR also produces DAF and Foden trucks, Leyland trucks in Europe and industrial winches. It also competes in the truck parts aftermarket and has finance and leasing subsidiaries).

Peterbilt’s line of heavy-duty truck models feature lightweight aluminum cabs, a variety of suspension systems, and a three-piece, 20-bolt crossmember/ gusset unit for frame durability, according to Panza. These and other innovations have arisen from the company’s long-time commitment to R&D. Indeed, Peterbilt pioneered the use of aluminum to cut frame weight and increase payload capacity as far back as 1945.

In 1949, Peterbilt introduced a practical cabover engine model in expectation of highway length limits. Then, 1959 saw the 90-degree-tilt hood for easier service access, while the early 1970s saw development of trucks for transporting refuse.

And 1986 brought the introduction of Peterbilt’s 379 Model group, which included the first aerodynamic designs for better fuel efficiency. The Unibilt Cab Sleeper System, offering a 62 percent larger opening in the sleeper, hit the road in 1993. The Unibilt UltraSleeper, introduced in 1997, has been called the “Class of the Industry.”

If that’s not enough, “we have introduced more new products and services since 1993 than at any time in our history,” Panza says. Indeed, this past April the company brought out the Model 270 medium-duty cab over engine (COE) model aimed at markets that require better maneuverability, driver comfort, and maximum payload. On the services side, the company expanded its TruckCare(r) program in 1997, began offering a digital message center option the same year, and introduced a Peterbilt credit card. “Peterbilt has continued to expand its presence in the premium end of the Class 7 market with the Model 330, while the Model 270 adds another product to our medium-duty lineup,” says Panza. “It strengthens our position by providing practical solutions for inner-city and regional distribution, as well as special vocation applications.”

The Beat Goes On

Yet another new entry for Peterbilt in 1999 is the Premium Aerodynamic Conventional Model 387. Its contoured design as side-by-side engine cooling and regional load center electrical system offer a preview of technological trends still to come in heavy-duty trucking.

And to get more product to market, the company has been steadily expanding its dealer network (now topping the 200 mark in the U.S. and Canada). “We are certainly pleased with reaching this milestone,” enthuses Panza. “The dealer network has increased 50 percent since 1991.”

While the company has been holding up its end of the sales and service bargain with things like the Peterbilt Platinum Oval program outlining operating standards, plus capital assistance for new facilities and the Peterbilt Dealer Expansion Program, the dealers themselves have jumped on the bandwagon. Overall, Peterbilt dealers have invested some $60 million in capital improvements over the last three years, including 13 entirely new facilities in the last year.

“We will continue to seek distribution growth opportunities in order to remain close to our customers,” concludes Panza. “And we will do so without sacrificing our reputation for class and quality. It’s what our customers expect in our products, our services and our dealer network.”