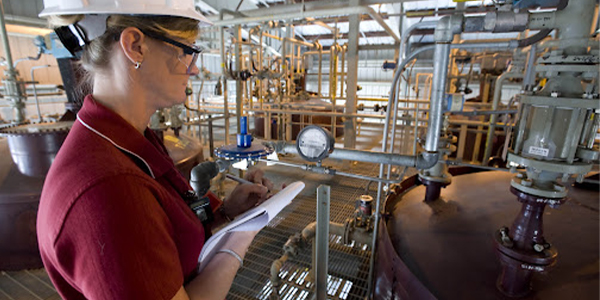 The work at Kennedy Space Center requires the most brilliant minds in aerospace applying futuristic technologies in a quest to better understand our universe. Yet while all eyes there are focused on the skies, one company keeps watchful eyes not on the high-profile successes of the space program but rather on a less-heralded yet critically important by-product of such work. The company, Perma-Fix Environmental, Inc.; the byproduct: hazardous waste. In February, Perma-Fix announced that it had been awarded a multi-year contract by Space Gateway Support LLC (SGS) for the Kennedy Space Center, as well as Cape Canaveral Air Force Station and Patrick Air Force Base, which speaks volumes about the company. “The award of this contract by such prestigious organizations as SGS and NASA/Kennedy Space Center reinforces the unique capabilities and high environmental standards of our Industrial Services Segment and the entire organization,” said Dr. Louis Centofanti, Perma-Fix Chairman and Chief Executive Officer.

Centofanti founded Perma-Fix in 1990 as a treatment and reclamation company for hazardous and industrial waste. He has led Perma-Fix into solid relationships with several governmental clients, such as the Department of Energy (DOE) and the Department of Defense (DOD). The company completed an early stage public offering in December 1992 (NASDAQ: PESI), which helped to facilitate 14 acquisitions, primarily of industrial wastewater technologies and facilities.

“The industrial waste management market is estimated at $40 billion with approximately $13 billion allocated to treatment services,” said Dr. Centofanti. “The market is regional in nature as commercial waste generators do not want to incur the cost of transporting waste in excess of 200 to 300 miles. Most of our marketing efforts in this area are local, so we maintain a staff of local salespeople at each facility, who call on potential customers. Our strategy is to focus on the geographic area surrounding each of our facilities and we presently serve as the major supplier in the lower southeast U.S. Our growth strategy is to continue to grow via upgrades to existing facilities and tuck-in acquisition in the Southeast and Midwest.”

Nuclear power
One of the fastest growing business units at Perma-Fix is the Nuclear Services Division. This group provides radioactive, hazardous and mixed waste management services to hospitals, research laboratories, institutions, nuclear utilities and numerous Federal agencies including the DOE and DOD. The Nuclear Division has developed the most advanced treatment technologies available in the industry, while operating three radioactive licensed treatment facilities that manage the treatment and disposal of radioactive, hazardous and mixed wastes. It also provides on-site treatment services, analytical services, and consulting services. “Unlike the industrial waste market, the mixed waste market, which is waste containing both hazardous and low level radioactive components, is national in scope,” said Dr. Centofanti. “The DOE is the largest generator of mixed waste, estimating the cost to treat its mixed waste at a minimum of $7 billion. Estimates to treat new mixed wastes generated annually by the DOE and commercial organizations currently stand at more than $150 million per year. The current DOE fiscal budget for Environmental Management is $6.5 billion, of which it is believed that the majority will be spent on the cleanup, maintenance and oversight of existing DOE facilities.”

To meet the opportunity in nuclear waste management, Perma-Fix executed an aggressive growth and acquisition plan. In June 2000, the Gainesville facility was granted a modified permit that significantly increased its treatment abilities in mixed waste. The facility has been reconstructed and can now accept a wide variety of mixed wastes. Two months later Perma-Fix purchased DSSI, located in Kingston, Tenn., which is a liquid mixed waste treatment facility; and, less than a year later the company acquired East Tennessee Materials and Energy Corporation, which has the broadest national capabilities to handle large volumes of mixed wastes requiring treatment. “Perma-Fix’s strategy for capturing the nuclear waste treatment market involves the use of and development of a number of technologies at our facilities, some of which are proprietary, that are permitted and licensed to accept the waste. This was a revolutionary concept because a commercial outlet for treatment of DOE problematic mixed wastes, that had been stored for decades, was not available until Perma-Fix entered the market,” said Dr. Centofanti. “The company presently has 18 years experience treating these materials and has now put in place new assets that will dramatically expand our role.”

Proprietary process
The manner in which Perma-Fix identified and grew its nuclear market share greatly impressed Bill Carder a 25-year veteran of the nuclear industry, who recently joined the company as Director of Business Development. “I bring an outside perspective to Perma-Fix, and what most impressed me is the way that the company developed a strategic plan and approach to nuclear, growing that business from $4 to $40 million in five years,” said Carder. “It’s unusual for a company to successfully follow a strategic plan when they are paving the way in the market to address complex waste streams. That takes management focus, innovative thinking, and discipline.” It also requires a “tool box” of technologies that is unmatched in the industry. In some cases, for very simple waste streams it is the application of the Perma-Fix(r) Process, a proprietary treatment technology that converts hazardous, low-level radioactive waste into non-hazardous material, which then can be disposed of as radioactive only waste. The process is simple, safe, creates little or no volume increase, reduces radioactive emissions through densification, and is the most cost effective option on the market today for cleaning up mixed waste, according to Carder.
“We take a container of waste, add chemicals, mix them together and let the mixture sit at room temperature, under ambient conditions, until it has reacted,” said Carder. “There are no dangerously high temperatures and no emissions. It is a very forgiving and cost-effective process. The Perma-Fix(r) Process is a batch process, so we have total control at all times.

And in some cases the waste stream may have multiple contaminates requiring multiple steps and technologies to make it acceptable for disposal. In these cases, the company has another proprietary process which is used to separate organic contaminates from the waste stream, for treatment in a chemical destruction process for organic materials. This process is used on solids materials, such as soils, contaminated with solvents, pesticides, Polychlorinated Biphenyls (PCBs) and other hazardous organics.

Arguably there can be no more important business than managing the hazardous waste that, if not properly discarded, could cripple businesses and local economies and irreparably harm the environment, and the people who live in it. Therefore, it’s reassuring to know that a company as technologically sophisticated and as environmentally conscious as Perma-Fix is the setting standards. For that alone, its success is understandable and well deserved.