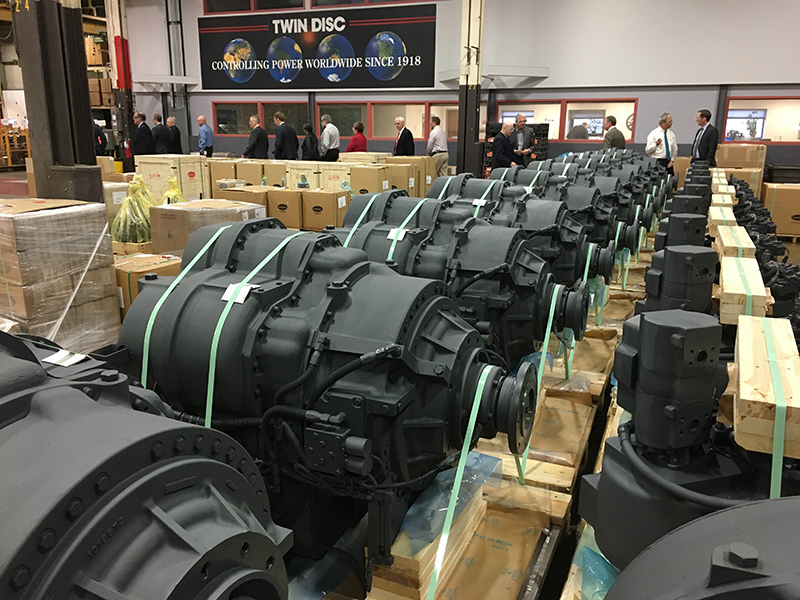 When you’ve been in business for a century, you’re going to see considerable change. And while the flat plate clutch first introduced by Twin Disc is to this day the basic design for most industrial clutches, the beginning of the twenty first century presents a much a different business proposition than the dawn of the twentieth. Technologies, markets, customers and manufacturing processes are all much more complex. What hasn’t changed, however, is the quality of its power transmission products and continued engineering innovation.

That Twin Disc remains a key manufacturer of heavy duty power transmission products used around the world in a range of land- and marine-based applications attests to the company’s powerful durability, vision and commitment, carried out by successive generations of leadership.

“Our focus is to improve the entire powertrain by integrating our clutch system designs in ways that are totally seamless to the end user,” says John Batten, president and CEO—and great grandson of one the company founders. While performing “behind the scenes,” so to speak, Twin Disc products are integral to the efficient operation of machines vital to our daily lives. These include farm tractors, construction equipment, firefighting and rescue vehicles, pleasure craft, fishing and work boats, a variety of industrial pumps and turbines, to mention just a few. As the Twin Disc branding tagline puts it, “We put Horsepower to Work®.”

While Batten and his family retain a large interest of Twin Disc, the company is publicly traded. With headquarters and the largest manufacturing facility still maintained where Twin Disc first started operations back in 1918 in Racine, Wis., it also operates a multinational network of sales and manufacturing operations that extends to Oregon, Washington and Florida in North America, as well as Canada, Belgium, Australia, Singapore, South Africa, Spain, Japan, Italy and India.

In terms of evolving technology, Batten points out that, “During the last 30 years, there’s been a growing trend to replace mechanical controls with electronic controls, particularly in the auto industry and becoming more so with the more widespread adoption of electric and hybrid drivetrains.”

Perhaps even more challenging for Twin Disc, however, is a growing diversified customer base that’s expanded well beyond its first product innovation—clutches for farm tractors. “We work with OEMs that in many situations are selling their powertrain system to incorporate in another manufacturer’s vehicle or application. So the first engineering issue we have to deal with is not just what the customer wants, but how that customer needs to fit the needs of their customers. It gets further complicated when there is no standardization even within a given segment. One OEM’s powertrain design is different from another’s, even though they are all ultimately used in a similar kind of vehicle,” Batten says. “The problem for us is that we’re typically not producing high-volumes. Which means we can’t cost-effectively have one design for one customer, but then a bunch of others for what’s basically the same application. So one of our fundamental challenges in the engineering phase is to provide a design that accommodates most of our customers, and then persuade them all this design is their best fit.”

While Twin Disc is producing high volumes, it might outsource manufacture; Batten emphasizes that final assembly is always performed in-house. That process, too, is changing. “You could say we were operating as a sort of large job shop,” Batten says. “But our manufacturing processes are changing, in large part due to new machine capabilities. We adopted cellular manufacturing about 25 years ago, but we’re finding that we can improve our overall flow by deleting some cells and employing tools with greater capabilities.”

He adds, “It’s not just us, but all manufacturers are getting the benefits of the new 5 axis machines. You can do much more with these machines than you can with fixed cells. One person operating a 5 axis machine can do the work of four or five people, and faster.”

New machine capabilities are also helping to address another pressing problem Twin Disc shares with many manufacturers today. “During the recession we had a force reduction which included the retirement of many of our older skilled machinists. We currently employ about 700, down from the 1,000 employees we had in 2012. The new machines help us do more with less labor, but we still need skilled operators to run them. To help find those people we are partnering with local trade schools and offering apprenticeship programs.”

Batten points out that, “Everyone is facing the same problem. We have to do a better job in portraying manufacturing as a good paying career choice. All too often the perception is that manufacturing is dirty and boring minimum- wage kind of work. For people with the right skills, it’s actually quite the opposite.”

Coupled with direct to OEM sales, Twin Disc maintains a global presence through an international distributor network, although the percentage of North American business versus the rest of the world varies by customer segment. Being a key supplier to major OEMs Caterpillar and Cummins further increases its global footprint. The diversity of the markets it serves helps keep Twin Disc on an even keel; growth opportunities in oil and gas are currently helping to put business in higher gear.

“It’s a complex business that keeps us on our toes,” Batten says. “The Twin Disc value proposition is three fold. First, we offer the highest quality product. Second, we have the engineering expertise to design a solution for any powertrain application. Third, and not least, we have an international support network that is second to none.”

Twin Disc may have had to downshift at certain times during its history, but today is running in overdrive, enabling an array of machines in a variety of daily use to work as efficiently as possible.