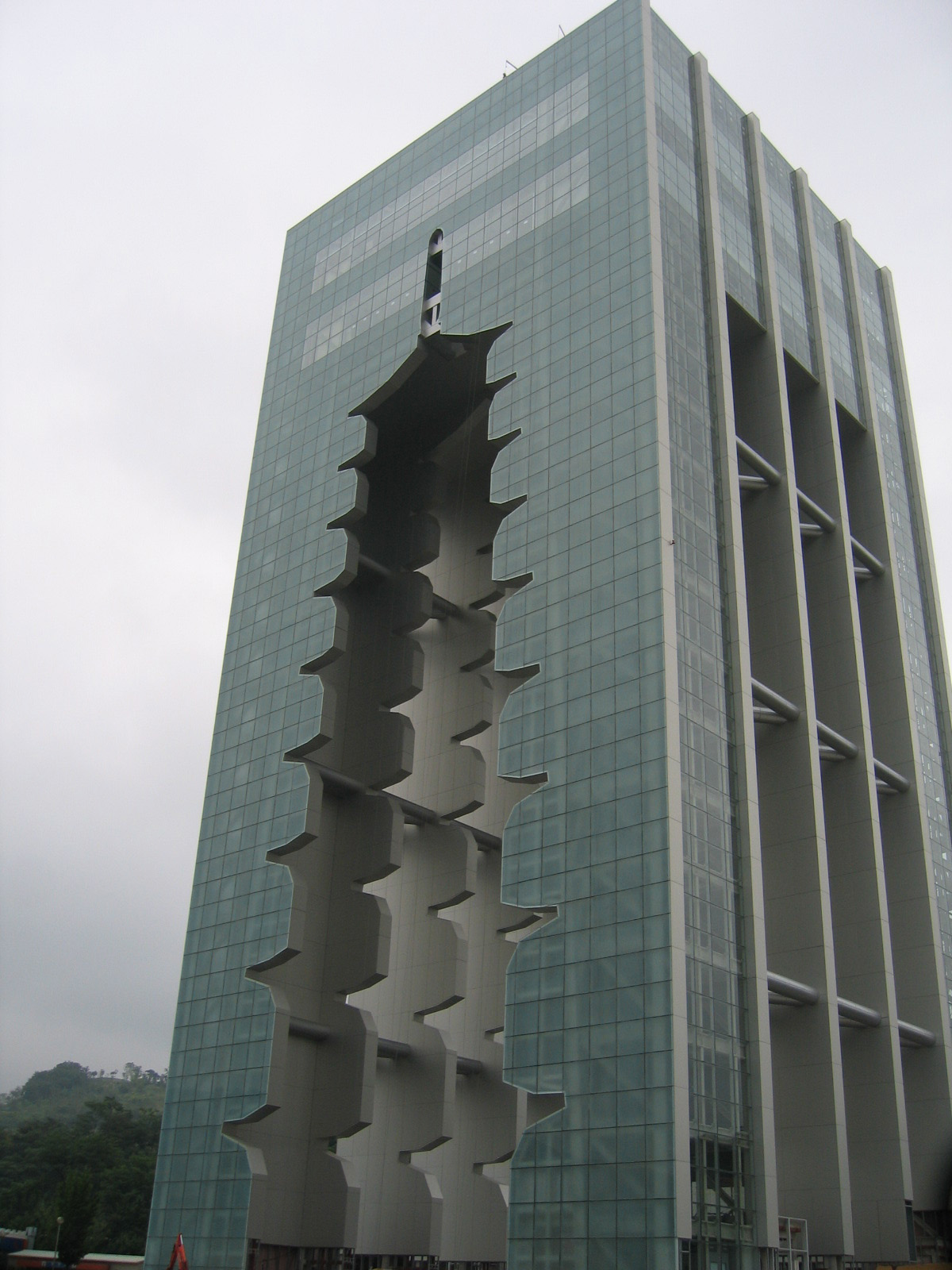 Completed in the 7th century CE, the Hwanryongsa Temple’s Wooden Pagoda was built entirely of wood—with no iron nails used. At the time the tallest structure in East Asia, and the tallest wooden building in the world, this architectural feat was the center of state-sponsored Buddhism during the Silla era. Although it was destroyed in the 13th century, it remains an important symbol of the heritage of the city it once looked over, Gyeongju City, North Gyeongsang Province, South Korea.[1] When city officials, building owners, and the principal architect planned a showpiece structure for the center of the Gyeongju Cultural Expo Park to reflect this heritage, that building would have to be exceptional.

When civic and business leaders decided to build the remarkable 17‐story building with a cut‐out in the center resembling the legendary nine-story Hwanryongsa Temple’s Wooden Pagoda, they searched for the appropriate material to accommodate the ambitious design. They were interested in a reflective, metallic finish that would illuminate the structure and show off their ancestral heritage. They were also insistent that the composite panel must have a durable finish, be corrosion resistant, and have a consistent panel‐to‐panel match quality.

Mr. J.H Lee, President of Garmco Myunghwa Ltd., presented the architect with samples of Lorin Industry’s ClearMatt® Architectural Class II Anodize Film finish. Lorin manufactures coil anodized aluminum, which can be finished in a wide array of colors and features an anodic layer that is part of the aluminum, so it does not chip, flake, or peel like paint and other coatings can. According to Mr. Lee, the building owners commented that “the clear anodized finish maintained the aluminum’s reflective properties like they were looking for and did not cover it up like silver paint. There are too many buildings in Korea that are painted—and you can tell.” Since the anodized aluminum was processed in a continuous coil operation, the panel-to‐panel match quality far exceeded their expectations as compared to batch anodizing producers. Of course, materials other than aluminum were considered as well, namely stainless steel. However, Lorin aluminum showed fingerprints less than stainless steel, and such a public and well-visited building would have to maintain its appearance despite the inevitable press of thousands of hands. Additionally, as the aluminum oxide layer is three times harder than the aluminum itself, the durability of the finish constituted yet another reason to choose the material for the project. The resulting structure, the Gyeongju Tower, uses 212,400 ft2 (19,700 m2) and 120,000 lbs. (54,000 kgs) of Lorin anodized aluminum.

The honeycomb composite panels used in the structure are widely used as an alternative to solid panels, as the design can improve strength and stiffness without sacrificing light weight. For example, for just 0.6% more weight, a honeycomb panel can outperform a solid panel’s flexural strength by nine times and stiffness by 37 times. The use of honeycomb composite panels in construction also typically eliminates the need for welding. Additionally, honeycomb paneling provides excellent thermal insulation and sound absorption properties compared to other metals.

Now, the Gyeongju Tower stands tall in the Gyeongju World Cultural Expo Park. It has an observation lounge, exhibition hall, and hosts various cultural events drawing nearly 1 million visitors annually. Recently, another tower celebrating the Hwanryongsa Tower joined the Gyeongju City skyline. In a celebration marking the end of a cultural festival, and a hope for the reunification of Korea, a symbolic traditional wedding was performed between the two buildings.[2] Clearly, the people of Gyeongju expect the Gyeongju Tower—and the Lorin aluminum it sports—to remain beautiful and durable long into the future as a vital source of pride and hope.