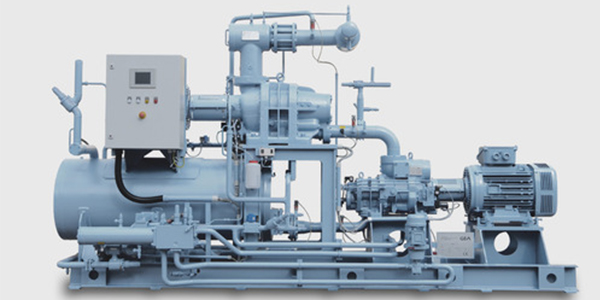 Just like Coca-Cola or Exxon, FES Systems Inc. is a well-established and widely recognized brand name. Not to the general consumer, but in the industrial refrigeration business, FES is a worldwide market leader.

One reason FES is the IBM of its industry is that it has been in business since 1949 and has an established track record of product innovation. Also like IBM, the FES initials originally stood for something that no one really uses to refer to the company. (Give up? It’s Freezing Equipment Sales.)

As with everything else, more than a half-century later, things have grown more complex, but FES has grown with the times. In fact, FES has helped define the times for industrial refrigeration, beginning with innovations in the early days with rotary vane compressors to today’s high performance screw compressor technologies featured in the company’s flagship G-series refrigeration units.

Also in keeping with current trends, FES is a global concern, thanks in part to its 2000 acquisition by GEA of the Frankfurt Metallgesellshft Group and its refrigeration division based in den Bosch, the Netherlands. Indeed, FES recently opened offices in the Peoples Republic of China and is seeing promising international growth. Paradoxically, one reason FES is shipping more international units is the rising trend among domestic manufacturers to turn to offshore facilities to lower costs. However, while labor may be less expensive, it doesn’t pay to skimp on refrigeration equipment whose effectiveness and reliability bears directly on product quality and usability. Thus, FES is finding that it is serving U.S.-based companies, but shipping to overseas subsidiaries.

Two Customer Types
FES has two primary customer bases – food and petrochemical. As a result, FES has a “bipolar” personality – the freezing needs between the two are quite different. At the same time, they complement one another to provide a stable overall business.

“There’s been a steady growth in the processed food market over the last 10 years,” notes Gary Schrift, national sales manager for that segment, “driven in part by the rising demand in snack foods. Overall, though, it’s a pretty stable market. After all, people have to eat, and we rely on this industry to safely package and store foods for our consumption. And they will always need effective refrigeration to do that.” He adds that while overall business in the food sector was down last year, this year sales have been improving.

In most cases, refrigeration units for food and beverage storage are “off-the-shelf” units that can be shipped in five to 10 weeks, unlike petrochemicals, which are virtually always custom designed, taking up to six months to complete.

“Frequently we’re working in concert with customers in the construction of a new facility,” explains Dennis Halsey, national sales manager for petrochemicals, “so what we’re doing is all part of the overall engineering and construction process. There’s a lot more custom design involved to meet the specifications of the building and the application.”

But whether it’s a custom system or a standard unit, Halsey and Schrift emphasize that they don’t consider their products as commodity items. “Our orientation is always to provide customer solutions tailored to individual needs, whether we’re designing and fabricating a system or installing a basic unit,” Schrift explains.

As different as the two segments are, fortunately they balance one another. “Historically, if business is down in food, petrochemical will be up,” Halsey says. “So that helps to keep business stable. However, the nature of the business in general is high production peaks followed immediately by low valleys, which strains our manufacturing process. We require a highly skilled labor force in a labor-intensive operation. Last year we implemented Kaizen manufacturing, and we think that’s going to enable us to get a better handle on managing these dramatic ups and downs. For example, we’ve broken four stations down into 10 different processes. The smaller processes require less skilled labor, so when we do encounter an upswing, we have the flexibility of hiring temporary labor that doesn’t have to be as highly skilled.”

Sales Channels
FES products are marketed through about 30 distributor reps in North America. Some reps may specialize in one market segment or another, which is often largely a matter of geography. “Our guy in Houston is working with the petrochemical industry, while somebody in the Midwest is most likely working with a Tyson or any of the other big food companies you find in that region,” says Schrift.

FES works closely with its reps by holding yearly sales meetings and working with them at regular trade shows. Frequently, even though the rep might carry other lines, Halsey notes that the FES brand is incorporated into the rep’s business name. “What’s usually the case is that FES will be the prime line, and they generally have secondary refrigeration products that actually support parts of our system,” he says.

International operations are a little different, largely because of language and cultural difference. Halsey notes that in China, for example, agents and engineers on-site who are Chinese make a big difference in properly negotiating that nation’s bureaucracy and expectations.

Product Innovation
Of course, what sells any product is the quality of the product itself. Here FES builds on a longstanding reputation for product excellence and innovation. Particularly important to international operations that wish to avoid the costly reshipping of machinery is the current G-series, designed to be repaired in place, a key market differentiator of comparable refrigeration systems.

“The main part to any of these systems is the compressor,” Schrift explains. “Anything you can do to extend the life of that component extends the life and long-term profitability of the system, which should last at least 20 years.”

Towards that end, FES has recently introduced yet another breakthrough, the Life Trac(r) vibration analysis, an onboard continual system checkup that can detect a variety of imminent problems – including bearing failures, unbalanced or misaligned couplings and bearings, and component fatigue – before they become major problems. “Catching an impending problem before it becomes one not only minimizes downtime, but it extends the productive life of the compressor, thus improving the customer’s ROI,” Halsey says.

FES’ onboard inspection service is unique in the industry. Equally unique is the prospect of computerizing the vibration monitoring on-site to achieve even more immediate and effective preventive maintenance, which FES will begin to offer sometime this year on its new systems. In a second stage, FES will offer a retrofit that will fit into the central control panel of any refrigeration system – including non-FES models – to provide continual vibration monitoring. “It will be sort of like the difference between just having a stereo radio in your car and getting a CD player installed,” Halsey says. “If you want the advantage of the extra component, it’s just a matter of getting it plugged in to work with your existing system. We will be the only refrigeration company that can supply this capability.”

Another innovation is a wireless monitoring system. “Ten years ago the big thing was to have a computerized graphical display built-in to the control panel to monitor the system,” Schrift says. “Our idea is to have a tablet PC someone can take out onto the floor, download the data, and then take it back to the office.” The product is currently under development and is expected to be marketed later this year.

Customer Service
Like any other business, price is a major purchase consideration. So is innovation and quality. FES believes that customer support and service also has a large contribution towards sales, and maintains five satellite service and parts centers and also offers worldwide start-up service, field troubleshooting, maintenance and repair and on-site customer training. “One of the new things we’re doing this year is a preferred-contractor program in which we work directly with contractors who install our systems as part of a larger project,” Schrift explains. “We work with these guys to help solve problems and inform them of key product issues. It pays off in extending our reputation not only to these guys, but ensuring the good reputation of our products to end-users.”

Looking ahead, the refrigeration business looks as though it might be heating up. “Over the last five years, business has grown about 1 to 2 percent a year,” Halsey says. “So it’s been pretty stable. We’re looking to expand to other industries, including hydrocarbons. One thing that will be a little different for us is branching out to the natural gas field. Although it doesn’t involve refrigeration, they do need compressors, and our compressors can work quite well in their applications.”

And this is why FES thinks things will stay “pretty cool” in the near future.