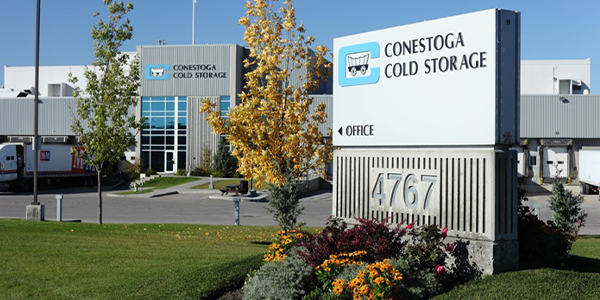 Then most people think robots, what comes to mind is R2D2 of Star Wars fame or some equally science fictional notion of a mechanical person that is a figment of someone’s imagination. Not so the case with Conestoga Cold Storage, which has been employing robots since 1980 to automate its Canadian frozen foods warehousing and distribution operations. While these robotic stackers may not look like people, they not only replace expensive manual labor, they speed up the process to a level of efficiency unachievable by mere humans.

“Our stackers can move a pallet holding as much as 2,000 pounds of product straight up in the air as high as 100 feet,” points out Greg Laurin, vice president of operations. “They can move at the speed of 155 feet per minute. And, they don’t need rest breaks, so we can operate around-the-clock.”

Such fully computerized warehouse and distribution centers in Kitchener and Mississauga, Ontario as well as Calgary, Alberta and Montreal, Quebec combined with cross docks in locations ranging from Ottawa, Ontario to Winnipeg, Manitoba give a company with an aptly pioneering name a considerable edge over the competition. “There are two or three major cold storage companies with a national reach comparable to Conestoga, as well as a number of smaller regional players,” Laurin explains. “Some of these competitors haven’t modernized their facilities as we have, and having to maintain older, less efficient warehouses definitely puts them at a disadvantage. Because of our high degree of automation, we’re better able to absorb the higher operating costs that everyone is facing.”

One such major expense that is continuing to rise is the cost of energy. Here, again, it is automation to the rescue.“Energy is the second highest cost in the cold storage business, and energy prices continue to rise,” Laurin says. “We’ve installed technology in our control engine rooms to operate more efficiently at lower costs. Every five minutes, our program monitors the most current price of energy through the Internet and adjusts the warehouse temperature accordingly. During peak periods of energy usage when prices are high, the system shuts off power. When prices go down, power comes back on. Even though we might run things a little bit colder to compensate for things warming up a bit during the shutdown, overall it results in considerable savings on the electric bill. Also, because we are fully automated, we don’t need lights – unlike human workers, robots don’t need to be able to ‘see’ anything. So not only do we save on the cost of lighting, but we also save on the extra energy expenditure that would have been required to compensate for the added heat generated by lights to maintain colder warehouse temperatures.”

From the customer perspective, technology also provides highly accurate inventory status and product tracking. “For larger companies, we interface with their standard Electronic Data Interchange (EDI) systems. For smaller companies, we provide a Web site to track their product,” Laurin says. “In either case, inventory and shipping data is instantly available on-line on a 24/7 basis.”

Because much of Conestoga’s technology is of its own proprietary design, the company has that much more control over the efficiency of its processes. “All our robotic stackers are built to our specification to do precisely what we want them to do,” Laurin notes. “We are unique in the industry in that we do not rely on third party provided technology.”

Interestingly, early-adopter Conestoga remains in “wait and see” mode about the much bally-hoed Radio Frequency Identification (RFID) tagging. “The technology isn’t quite there yet,” Laurin maintains. “The tags are too expensive to justify any potential benefits that we don’t already achieve with bar-code scanning.”

Continuous Improvement
Conestoga has grown organically since its inception in 1974. “We’ve occasionally looked at acquiring other companies, but we’ve found it made more sense for us to expand our facilities and capabilities as our customer base grew,” Laurin says. “Recently, for example, we added two robotic stackers to our Kitchener facility and 10,000 pallet positions. And, we’re continually upgrading and replacing systems with newer and more efficient components. For example, we just replaced a photo-eye and reflector system for identifying stacker location with more accurate laser technology. We’re also developing a technology that will enable robotic pick and pack at the case level within a pallet. Right now, the robot removes a full pallet and puts it on the dock to be shipped, but if the cases within the pallet have to be removed or sent elsewhere, that’s still a manual process that we are currently automating.

Laurin feels that Conestoga’s four main facilities currently in place are sufficient for future growth in Canada. “We are thinking about expanding into the United States, and if we were to do that, we’d have to establish warehouse and distribution centers to serve customers there.”

Because customers purchase space in the warehouse based on pallets, which have height in addition to width, Laurin notes that storage capability is expressed in cubic feet as opposed to the more standard square footage expression for footprint. The Kitchener warehouse, which also serves as head office, is located on 21 acres with 4,500,000 cubic feet; Mississauga on 24 acres with 12,700,000 cubic feet, and Calgary with 2,800,000 cubic feet. The Kitchener and Mississauga plants contain a blast freezer as well as cooler and refrigerator docks. “Calgary was added specifically in response to our expansion to the western part of Canada so we could better serve national accounts,” Laurin says. A fourth cooler and refrigeration warehouse was recently added in Montreal, Quebec.

Its Own Customer
Conestoga Cold Storage, which employs over 200 people, also has its own franchise distribution division. “In 1988, we began working with a unique chain of 40 specialty frozen food stores that needed a storage and distribution solution that would grow with them. We created Conestoga Franchise Services, a unique, customized division of our company to finance inventory, warehouse products and deliver these products to this specific franchised chain of stores. It now has over 400 stores across Canada and was also selected as one of Canada’s 50 best-managed companies along with Conestoga Cold Storage.

In addition to major national food manufacturers, Conestoga also has a number of smaller regional customers. “It might occasionally be the case where a customer might use one warehousing company in one location and a different one in another, and sometimes for the larger companies to use two services in the same region, but more typical is that the customer selects one company to provide all its cold warehouse/distribution needs,” Laurin says. “The bigger businesses may have once done their own warehousing and distribution, but today the norm is for the food companies to do what they do best – produce product – and outsource distribution to someone like Conestoga. It’s just more cost-efficient.”

Another trend is toward more packaged and processed frozen product. “When we first started out, we’d be storing and moving more raw materials that are bulky and heavy, for example, whole turkeys. Today, that paradigm has changed and our focus is on prepared foods. Which means you have more smaller items that you have to manage in and out of inventory.”

This increasing demand for convenience foods may also explain what Laurin sees as overall industry growth of eight to ten percent annually. “Since 1995 we’ve not only grown with the industry, but for the last five years we’ve seen annual growth rates of 20 percent. We anticipate continuing at this rate for the foreseeable future.”
This is about the only thing that Conestoga prefers not to see frozen.