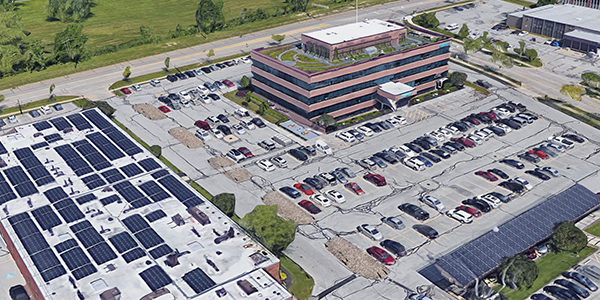 Over more than 75 years, Tremco Inc. has installed, replaced, or patched up the roofs of so many landmark buildings, both in North America and around the globe, that company officials admit they have a hard time picking out specific projects for distinction.
“Every roof project presents a different set of challenges,” relates Jordan Miller, the vice president of the Western sales division for the North American roofing arm of the Ohio-based company. For example: one of its most famous projects involved roofing work on sections of the Louvre, Paris’ world-renowned art museum. For the most part, however, the company’s handiwork can be seen atop millions of square feet of government buildings, schools, hospitals and factories.

The company’s tradition of high profile jobs dates all the way back to the 1930s. That’s when the federal government turned to the Cleveland company for caulking that was used inside the Washington Monument. The caulking was only expected to last for 20 years but instead was in place for 30 years and thus helped to burnish Tremco’s reputation as a quality firm.

Rather than rest on its laurels, however, Tremco engineers continued to develop products that revolutionized the world of roofing and waterproofing, most notably a cold process roofing system that generates low odor and is solvent and asbestos free, making it popular in sensitive environments such as clean manufacturing facilities (clean rooms), schools and hospitals. But that level of quality extends to all of Tremco’s roofing systems
and products.

Beating the hurricanes
When a record four hurricanes bearing winds of over 100 mph ripped through Florida in the summer of 2004, Tremco did not receive a single report of “wind uplift” damage and nor any warranty claims, even though the company installed and maintains more than 300 large roofs from the Florida Keys to the Panhandle region, covering some 6.1 million square feet.

Joe Lyons, the vice president for the Eastern sales division for North America, said that because of the company’s track record and its global reach, Tremco has many customers who’ve contracted with the company for multiple jobs. “They have Peace of Mind knowing that we are able to provide the roofing systems of the highest quality, as well as service and maintenance,” he said.

That’s why Tremco, which celebrated its 75th anniversary in 2003, has been able to grow from a northern Ohio manufacturer of roofing products to a worldwide company with 2,400 employees, with facilities not just in the United States and Canada but also in Europe, Asia and the Middle East. The roofing division remains the core of the company, although it has expanded to include units for sealants and for concrete ad-mixtures. With headquarters in Beachwood, a Cleveland suburb, Tremco was founded in 1928 in Cleveland by William Treuhaft, who manufactured roof cements and asphalt based coatings with just a handful of employees. The history of the company has been one of steady growth, both by geography and by product line. The company went public in 1964 and was purchased by the B.F. Goodrich Co. in 1980. Since 1997, Tremco has been a subsidiary of RPM, Inc., a leading manufacturer of industrial coatings and sealants and also maker of some well-known household products such as Rust-Oleum.

A pivotal growth point came in 1977, the year that Tremco introduced the BURmastic Cold Process Built-Up System to the roofing world. Before then, all large-scale roofing projects depended upon hot adhesives that needed to be heated using kettles and torches at temperatures up to 500 degrees. The heat and odors generated by the hot process were a particular problem on sensitive jobs such as hospitals and schools. The BURmastic process instead uses a cold interply adhesive material that can simply be pumped up onto a roof.

“It eliminated the smoke and odors that were associated with traditional hot built-up roofing, but more importantly it reduced the percentage of errors of overheating or under heating that are tradition with asphalt,” Lyons said.

A company of firsts
Even though it was a major advance, the BURmastic system is hardly the only breakthrough product developed by Tremco. Among the company’s many firsts over the years, Tremco was the first to use infrared scanning to detect wet insulation as well as make innovations in elastomerics, combining SEBS with asphalt and the first solvent free, single component insulation adhesive. Tremco was the first roofing manufacturer along with Weatherproofing Technologies, Inc, (WTI) its service division, and the first roofing service company, to be ISO 9000:2001 certified.

But Lyons noted that Tremco has experienced some of its greatest growth in recent years in the area of long-term maintenance. He said that at the last count the company had more than 150 million square feet of roofing covering thousands of roofs under active maintenance for its clients.

“The advantage to our customers is that we’ve positioned ourselves so that the customer doesn’t have to go to another company,” Lyons said. “We have solutions to any type of aggregate surface, smooth surface or reflective surface.” He noted that Tremco is a leader in working with its customers to prepare a financial plan for the lifecycle of a roofing system, so that the clients will have a five- to 10-year plan and be well prepared.

Another area in which Tremco executives are seeing both growth and considerable potential is environmental-sensitive roofing, including so-called “green,” roofing technology.

That’s why Tremco helps meet the needs of green conscious customers by offering a complete line of coatings and single ply solutions that are certified by the U.S. Environmental Protection Agency for its ENERGY STAR(r) program, a designation that applies to reflective roofing products that can reduce air conditioning needs by about 50 percent. The agency noted that so-called white roof surfaces only reach a temperature of 110 degrees on a hot summer day, as opposed to 170 degrees for a black, non-reflective roof.

Because of Tremco’s emphasis on maintenance, long-term service and restoration, the company was able to weather quite well the slow-down in commercial construction, which occurred since 2001. After all, Tremco was started and grew in the depths of the Great Depression.

Said Miller: “The beauty of the success of the company is that it has been recession-proof in a lot of ways from the standpoint that we are not just trying to sell new roofs, but trying to solve all the problems the customer has.”