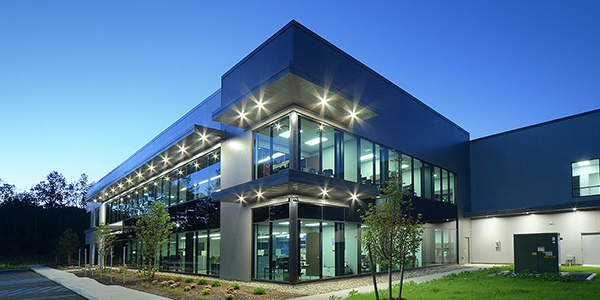 Things have changed a lot for American Buildings Company in the past decade. In 1991, the Eufaula, Ala.-based metal-buildings designer and fabricator hit the $100 million sales mark. Three years later, the company went public and began a period of phenomenal growth. By 1998, sales were $441 million and were growing at a rate of 16 percent a year. In the spring of 1999, American Buildings was acquired and taken private by Onex Corporation. In December 1999, Onex created a holding company called MAGNATRAX Corporation and made American Buildings the stand-alone flagship of this new unit.

Many changes…but one thing has remained the same – American Buildings’ dedication to its core business, metal buildings. That dedication runs through every one of the company’s fabrication plants in Alabama, Ohio, Illinois, Nevada and Virginia; and its technical centers, which cover every region in the country. The company is now comprised of divisions for buildings, components, heavy fabrication, storage systems, international business and national accounts. It also has a joint venture in Shanghai, China. Of these separate entities, the buildings division is “our largest, our mainstay, essentially the core from which we launched the other divisions,” says Keith Fischer, who assumed the American Buildings presidency in October 2000.

Strong Identity
To enhance that core, American Buildings has developed a roster of products and services that have now become synonymous with the company’s name – so much so that Fischer speaks of American Buildings as a brand. Demonstrating how the company approaches this concept, Fischer says, “A year ago, MAGNATRAX acquired Jannock Industries, which allowed us to add some very good, well-known building companies to our group. Through this integration, we have beefed up our core business, added new capacity and new products. We want to keep the American Buildings brand identity, because we’re the flagship of MAGNATRAX and the premier metal-buildings system provider in the industry.”

The company’s divisional structure is a way of enhancing the service American Buildings provides its customers – “the group of dedicated builders we partner with,” as Fischer refers to them. The American Buildings’ organization “allows us to bring opportunities to them in buildings, self-storage, heavy fabrication, components and roofing products. It allows us to be the total source for our builders’ needs.”

From the Drawing Board
Organizational matters aside, American Buildings has taken steps to expand its commitment to its customers. It is preparing to introduce a PC-based technical system. It is a massive undertaking involving the creation of a means for builders to transmit and share both drawings and engineering data with the company’s engineering department and manufacturing facilities. Through the technical system, a builder can generate permit drawings and engineering information from his/her office and, with the push of a button, transmit them to American Buildings’ engineers.

One of the significant ways this system differs from others is that “we’re setting up the engineering and technical sides of the program so that there will always be a human check on the data,” says Fischer. He adds that the system will be available to any authorized builder.

The new technical system will include a full version of AutoCAD 200I for the drawing portion. It will also give monthly updates that will keep the builder-customers current with specifications and details. “In a nutshell,” Fischer says, “customers get their drawings and engineering data instantaneously, and transmit the final work to our engineering department after they have determined the building is exactly what they want.”

Fischer believes the system solves an age-old problem in the buildings industry: “No matter who you’re talking to, the buildings industry has always been an engineering-constrained business. All of us have been working tirelessly to solve that engineering constraint and we always said the one who solves it will win the war. We feel we’ve done it with our new technical system.”

The Ongoing Revolution
The technical system will be a major determinant in American Buildings’ future. This past January, Fischer and the rest of the company’s staff completed their annual strategic planning meetings, from which emerged a plan going forward based on customer growth from the new system. “The technical system will revolutionize the way we do business,” says Fischer.
Strategic planning itself is a crucial part of American Buildings’ fiscal year. The company holds these meetings every year. “American Buildings does a very good job of strategic planning,” says Fischer. “Every year we make plans going out five years, considering the market and the economy, what’s hot and what’s not.” Fischer admits that the current shape of the building industry is less prosperous at this time than it has been in several years. “We’re planning our outlook going forward on the probability that we face a soft market this year,” he says.

This potentially weaker industry outlook makes the technical system an important development for American Buildings. It also reflects the company’s philosophy of continually breaking ground in the way it conducts business. “What we’re looking at is how we can throw the book out on how we did business, and look at ways of doing business down the road,” says Fischer. This modus operandi suits Fischer to a tee. “’Change’ is my middle name,” he says.

Fischer also recognizes that change is only one way to stay on top in this industry. “The new technical system is just one of the many keys to our successful business plan. We will never lose sight of our core business philosophy and corporate culture,” he says. That philosophy – expressed in American Buildings’ credo, “Market Focused – Customer Driven” – has been the driving force behind the company’s success over the years. Fischer knows that no matter how much technical innovation is integrated into the operations, one thing will remain the same – the customer. “We will never lose sight of the fact that this is still a people-to-people business, and we have the best people in the business,” he says.

More specifically, the technical system will drive many of the alterations American Buildings is projecting for its operations. “We’ll be revamping the engineering and technical sides to facilitate the integration of the new system,” says Fischer. “We’re planning on decreasing turnaround times and we feel we’ll be able to attain that quickly, thanks to the new system and our new approach to doing business.”