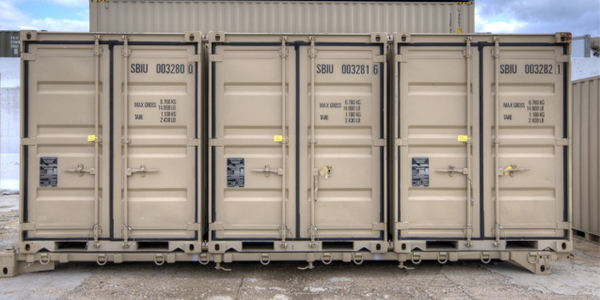 Its Vice President of sales, Nick Catanzariti, discusses how the company has grown from its humble beginnings into one whose products today are at the top of their class and whose highly customizable nature is commanding the attention of more and more industries.

In the 1950s and 60s, intermodal containers emerged as a revolutionary aspect in the world of shipping by reducing the cost of transportation and keeping the theft of goods, a significant issue at the time, to a minimum.

For the next 25 years or so, they were the primary storage sources for transporting goods all around the world. As these containers aged and depreciated down, steamship lines would simply scrap their used containers and sell the resulting materials for other uses.

Fast forward to 1983, where a man named Jim Brennan, Jr. was unemployed, yet held extensive experience in the trailer industry. Seeing the opportunity with regards to storage capabilities in these containers, which were beginning to pile up in the yards at Port Elizabeth, N.J., Brennan began buying these used inventories, refurbishing them and then reselling them to freight forwarders and rental companies for storage use. He named the company Sea Box Inc., a fitting name given the water-based origins of his product, and ran with the idea.

As his business began to take off, Brennan had customers coming back to him asking if he could modify the containers with features such as custom doors, shelving, and lighting. Realizing the potential markets for customized containers, Brennan began expanding his business into various other industries.

Thirty years later, Sea Box Inc. operates out of a 55-acre property with a 400,000-square foot manufacturing facility that serves as its headquarters in East Riverton, N.J. In addition to the main production center, Sea Box also has a test facility where its team of engineers and quality control inspectors can run tests to ensure the structural integrity of their containers. A quarter-mile down the road is also their ‘Inventor’s Shop’ which is where all of the machining of the containers is done. Finally, there is a fourth facility, in Hillsborough, N.J., which serves as an additional manufacturing plant for contracts specific to the military and defense contractor companies.

“We currently have about 165 employees spread throughout these facilities,” Catanzariti says, adding that Sea Box has recently started employing lean manufacturing methods in response to its growing business. “Having shifted from building customized units at low-volume production rates to a position where we are working extra shifts to produce our containers in high volumes given their demand, it’s been very helpful.”

By engaging in lean manufacturing and applying Kai-Zen practices to their production lines, Catanzariti says his company has vastly improved safety measures, reduced cost of production, and raised the quality of each container. “We are very pleased with the progress we’ve made in terms of manufacturing, and it’s had a positive effect not just on our customers, but our employees as well,” he says.

Sea Box currently does a great amount of business with the federal government, particularly the military and other quasi-defense companies such as Raytheon, Lockheed Martin, and General Dynamics. Catanzariti explains his company’s close ties to “the military has to have containers and shelters that are rapidly deployable and transportable anywhere in the world, and we have put our design and manufacturing expertise to use by developing products that meet these needs.

Catanzariti said what makes Sea Box’s containers so appealing to the military is their high degree of structural integrity as well as their versatility. Sea Box offers a full line of 20 and 40 foot containers as well as bicons, tricons, and quadcons which can be connected together to form twenty-foot equivalent units (TEUs). These TEUs meet all International Shipping Organization (ISO) standards meaning they can be transported anywhere in the world via land, sea or air.

“The military doesn’t always have big cranes available to lift large, fully-loaded, 50,000-pound containers,” Catanzariti says, adding that, “we provide smaller options that can be moved easily to wherever they’re going to be operating and then assembled on-site into a single bigger container for transport.”

In addition to the convenience of their size and structural flexibility, Sea Box’s containers can be customized with insulated wall panels, air conditioning, electrical wiring, lighting, and even plumbing to create containerized shower and latrine systems.

Sea Box’s containerized modular systems have been able to, as Catanzariti says, “revolutionize the way the U.S. military moves its logistical requirements around the world.”

Their success in meeting the U.S. military’s needs led to a $34 million dollar contract with the U.S. Air Force in September of 2012 and serves as a strong vote of confidence from one of the United States’ biggest markets.

While they continue to maintain a symbiotic relationship with the defense industry, Catanzariti says what really excites him about the present and future of Sea Box is the burgeoning level of interest coming from members of other industries, both domestically and internationally. “We’ve gotten to the point where we’ve established this platform of bicons, tricons, and quadcons that can expand and be customized to serve a multitude of needs, and through this we are seeing significant industrial and commercial applications,” he says.

Catanzariti says his company has already received quite a bit of interest from the energy and natural resource industries because their work often requires them to go “off the grid” into areas where the environment may be extreme in both climate and remoteness from civilization. “People in these industries really like our containerized shelters because they pretty much allow them to go anywhere and stay there for as long as they need,” he says, noting that, “our containers can have solar panels mounted on top of them and be wired to serve as shelters for personnel, generators, large computer servers, and even water filtration systems.”

Since Sea Box’s containers were originally designed to store cargo and be transported on ships, sometimes being stacked as high as nine containers tall, their structural integrity is what Catanzariti calls “second to none.” “With cargo being stacked on top of each other, you can imagine that the container on the bottom of it all is under a lot of stress,” he says, adding, “each of the bottom containers’ corner posts have to meet over 213,000 pounds of stress.”

Each of Sea Box’s containers adheres to this standard and Catanzariti attributes their strength and reliability to his company’s commitment to following the United States’ strict and stringent building codes. “Our country has the strongest building codes in the world and we certainly reflect it in our products, whereas other companies offering similar models in other parts of the world simply don’t have to follow the same guidelines.”

One of the more exciting developments for Sea Box recently is the production of their new collapsible container shelters, which will expand their business prospects even more given the increased flexibility to a product that already is highly customizable and structurally sound. “The idea about the collapsible model is it’s redeployable, ” he says, noting that, “with a forklift, a couple of people can set up the shelter in about 20 minutes.” The collapsible feature of the shelter allows them to stack four high during transport which provides significant cost savings, and the unique wall panel design is fully insulated making the shelters an energy-efficient choice for personal living quarters.

Catanzariti credits the open mindedness of Sea Box’s engineers and the flexibility of its products for their success in the commercial markets. “We don’t claim to be experts in everything, but a lot of industries see the opportunity in our containers and come to us with a plan of what they’d like to do with them,” he says, adding, “our engineers work with these customers to develop a product that will fulfill their needs. It’s never a boring day here, as we’re always making something different, and we like it that way.”

Although domestic markets account for around 85 percent of his company’s revenue, Catanzariti pointed to his company’s offices in Sweden, Australia, China, and South America as a sign that the times (and markets) are changing. “The U.S. is clearly our strongest market but we see a lot of opportunities opening up overseas, and our offices over there have been quite busy.”

Sea Box, Inc. is excited about its future, and leaders across many different industries should be too. With a sound, reliable product that can be tailored to an unlimited amount of needs, Sea Box may soon need to change its name to ‘Anything Box’.